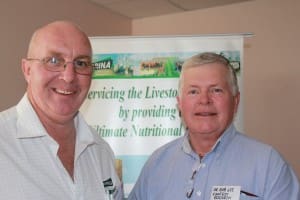 US feedlot nutritionist and consultant Dr Bob Lee, now based in Australia, is as hopeful as the next person that cattle prices rise here as they have in the US and inject some long-awaited profitability back into producer balance sheets.

However, amidst a plethora of generally optimistic market forecasts suggesting that low global cattle supplies and high international beef demand will translate into higher prices ahead here, Dr Lee is also sounding a quiet note of caution.

“Don’t get too relaxed,” he advised producers at a Riverina Australia cattle industry seminar at Warwick on Queensland’s Darling Downs this week.

Hailing from Garden City in Kansas, Dr Lee is a well known and respected international lot feeding consultant, and has spent much of the past 40 years advising feedlots in the US, Australia, Indonesia, China, South Africa and the Pacific Islands.

He has also been a livestock owner in his own right for much of his career, and notes that he talks from the perspective of someone who knows what it is like to talk to a banker “who is starting to get nervous”, or what it’s like when you can’t find feed ingredients at any price.

He can also talk from the hard earned experience of someone who has lived through several market “trainwrecks” as well.

These have included the mid-1970s cattle price crash, the fallout from Oprah Winfrey’s on-air condemnation of beef in the mid-1990s, the late 1990s Asian economic crisis, the closure of US export markets due to a BSE detection in 2003 and the late 2000s Global Financial Crisis.

Each of these events had the affect of sending cattle prices into sudden freefall, and all shared the commonality of blindsiding the industry at a time when things where otherwise going well.

Dr Lee noted that most media reports were currently painting a positive price outlook for producers in Australia and the US for the next year to 18 months.

“That is what the media reports, that is what everybody likes to talk about, but there are some things that I get a little nervous about,” he explained.

Many producers in Australia were understandably hopeful Australian prices will also rise to match recent US price levels, and Dr Lee said widespread rainfall may well precipitate that outcome.

However, he also cautioned that changes to international demand can quickly alter the price landscape.

“Here is the point I am trying to make: we’ve been hammered as producers on things that were totally outside of our control and outside of our realm of comprehension sometimes,” Dr Lee said.

“Why does this happen, why did this happen to us? The point is it happened.

“I don’t know if that is a sign I have been around too long and I’m not a smart enough learner, that I should have sold out and done something different. The point is, that is what happened.”

Some unfolding developments that Dr Lee admits are making him “a little nervous” at the moment include the potential impact of the recent avian influenza outbreak in the mid-west US poultry industry.

Dozens of countries have banned poultry imports from the US in response to the detections.

It is still too early to assess what the long-term impact will be. However, the diversion of export product back onto the domestic US market is likely to dampen poultry prices in the country, which in turn may affect beef consumption.

Other issues casting a shadow over an otherwise positive outlook for international supply and demand include Russia’s ban on beef imports in response to western sanctions last year, which has had a negative impact on prices of cheaper cuts in the US, and growing signs of economic uncertainty in Brazil and China.

Dr Lee pointed to a recent article which showed that 64pc of 393 Chinese millionaires polled in a survey indicated they had either left or were getting ready to leave China. Under so-called ‘millionaire visa’ programs, Chinese nationals can receive permanent residency visas and passports from the US, the UK or Australia, in return for committing to invest anywhere from $5 million or more in the host country.

“What is happening right now, and there is some media on this, is this anti-corruption campaign the president is pushing in China is really building pressure inside China,” Dr Lee explained.

“And I am not saying China is going to explode tomorrow.

“But what I am saying is that there is pressure building and if there are not changes in the country, that something may happen down the road that we as beef producers don’t like.”

Dr Lee said the best advice was to watch your equity position carefully and be adaptable in case changes needed to be made quickly.

“I am not trying to set off world panic but I am telling you there are things out there in other countries outside the US that you need to pay attention to.”