PROGRESSIVE young livestock sector stakeholders from across Australia are being encouraged to apply for the 2017 Zanda McDonald Award, which is now open for nominations.

The award, which comes with a $30,000 prize package, offers a unique career-enhancing opportunity, whereby successful applicants are introduced to and gain exposure from the Platinum Primary Producers Group – a network of over 130 of Australasia’s most influential agri-business men and women.

The award, run by the PPP Group, provides the winner and two runners-up with direct access to the wealth of knowledge that exists within the group’s membership. In addition, the winner receives an all-expenses paid overseas mentoring trip, a place on Rabobank’s Farm Manager’s Program and $1000 cash.

In its third year, The Zanda McDonald Award is now regarded as one of Australasia’s most prestigious badges of honour for young agri-leaders across the beef, sheep and dairy sectors wanting to further their careers in primary industry.

It is open to passionate, determined and innovative agriculturalists under the age of 35 years who are currently working in the agri-business sectors of either Australia or New Zealand, and who demonstrate natural leadership.

Chairman of the Platinum Primary Producers group, Shane McManaway, said the award provided a fantastic opportunity for young agricultural leaders to further their careers and their personal development.

“The award prize, in effect, gives the winner the key to unlocking all the knowledge and experience that exists within the PPP Group. They can call on any one of our highly respected members at any time for help, advice and guidance,” he said. 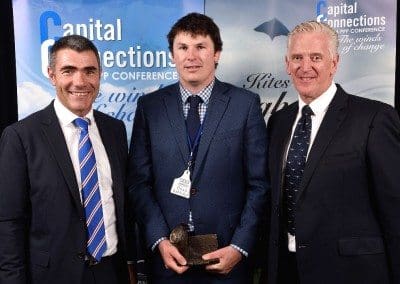 Earlier this year the 2016 Zanda McDonald Award was presented to 31-year-old Dean Rabbidge, a sheep, beef and dairy farmer from Wyndham at the bottom of the New Zealand’s South Island, who is also the chairman of the NZ National Young Farmers Contest.

Dean will soon embark on a mentoring tour within New Zealand, where he will spend time with several PPP members. In November, he will head to Australia to meet with trans-Tasman PPP members – including Charlie & Lizzie DeFegely’s sheep and cropping property at Quamby, Ararat, Victoria and the MDH Pty Ltd property at Cloncurry, Queensland.

“I am humbled to win this award. For me, the opportunity is immense. I am passionate about my agricultural responsibilities – not least running the family farm – and am looking forward to talking through the challenges with some of the most knowledgable producers there are,” he said.

“Just knowing that I can contact any one of the PPP Group to talk through issues gives me a great sense of comfort. I now have a strong support network that will help me unleash my potential, as well as that of my business, realise my ambition of encouraging more young people into agriculture – and help me to promote a positive perception of agriculture across urban areas.”

The award is named after the late Zanda McDonald, a prominent identity in the Australian beef and livestock industry and a foundation member of the PPP Group. He died in April 2013 at the age of 41, following a tragic accident on his Queensland cattle property. Launched in 2014 by the Platinum Primary Producers (PPP) Group, the award was born out of mateship and respect for one of agriculture’s natural leaders. The PPP Group is a collective of over 130 of Australasia’s most influential rural leaders, representing over 12 million hectares of farmland across the two countries and over 20 million livestock units.