Police searching for man who attacked stockman near Mungindi

Beef Central, 16/06/2020
POLICE in Queensland are seeking public assistance to locate a man or utility after a man was stabbed in the face on Sunday morning while mustering cattle near Mungindi. 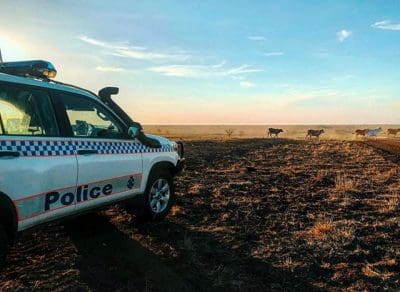 According to the police report, the 30-year-old victim of the attack was mustering cattle on Noondoo Mungindi Road at 11:30am on Sunday when he saw a man carrying a “giveway to stock” sign to a utility.

The stockman approached the other man and a verbal altercation occurred, after which the man grabbed a boning knife from the utility and charged at the stockman, stabbing him in the right cheek.

The man then drove off toward the Carnarvon Highway.

The stockman was treated for a non-life-threatening injury at the Mungindi Hospital.

The men are not known to each other.

The sign is owned by the stockman and was left on the ground when the man fled.

The man police are searching for is described as 185cm tall, skinny build, mid length sandy blonde hair and wearing a red flanny and blue jeans.

He was driving an early 2000’s Toyota Hilux single cab utility with a swag, tarp and water bottles in the tray.

A Queensland Police spokesperson told Beef Central on Tuesday morning there are no further updates to the details released about the incident on Sunday but investigations are continuing.