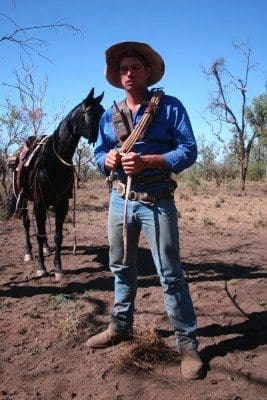 THE National Farmers Federation and its member organisations have launched a campaign encouraging the Federal Government not to proceed with the proposed ‘backpacker tax’, which would erode the agriculture workforce and the prosperity of regional communities.

The #backpackertax campaign will comprise an online petition and social media aimed at harnessing community support for a softening of changes to the way working holiday makers (backpackers) are taxed.

Backpackers make up an important part of the extensive cattle industry’s labour resource, in a sector where staff access can be a constant problem.

As Parliament resumes today the deadline is looming on the tax, announced in the 2015 Budget, which deems that from 1 July this year, all working holiday makers are to be taxed as non-residents at a rate of 32.5 per cent on all income.

The NFF agrees backpackers, who make an average $15,000 during their stays in Australia, should pay tax. However, it considers an effective tax rate of 19 percent, achieved through deactivation of the tax-free threshold, to be fairer for both backpackers themselves and the industries which rely upon them.

Chair of the NFF Workforce Productivity Committee, Charlie Armstrong, said backpackers were critical to ensuring there was an adequate workforce available to primary producers, particularly at busy times of the year.

“The agriculture industry relies on backpackers to fill severe labour shortages which are often seasonal and temporary, for example, when crops are being harvested or livestock production is at its peak,” Mr Armstrong said.

“Each year, backpackers contribute around $3.5 billion to the Australian economy and around 40,000 find employment on Australian farms.

“Taxing backpackers at a rate of 32.5pc will make work in Australian agriculture a highly unprofitable proposition,” Mr Armstrong said.

“Furthermore, it will lead to reduced agricultural productivity and will strip regional communities and businesses of much needed tourism spending.

“Already we are seeing signs that the proposed tax rate of 32.5pc is scaring working holiday makers away from Australia. In nations like Canada and New Zealand, they are just as likely to be able to find farm work that attracts substantially lower amounts of taxation.

“Any further decline will only exacerbate the current trend of 12pc fewer backpacker arrivals to Australia each year.”

The implementation of a 32.5pc tax rate has been estimated by Government to raise $540 million of the forward estimates while a rate of 19pc, as proposed by the NFF, would generate $315m.

Mr Armstrong said any perceived losses incurred in containing the rate at 19pc would be dwarfed by the serious economic impacts of reduced backpacker tourism and associated agricultural losses a 32.5pc rate would bring.

“What is the point of increasing revenue through the implementation of this tax only to strip back the contribution of agriculture, tourism and regional spending to the economy?” he said.

“We urge farmers and other industry stakeholders as well as the broader public to join us in demonstrating the importance of backpackers to agriculture, tourism and the regions by signing the online petition.”