The ACVA has been approached by ABRI to develop some succinct guidelines for the management of several diseases of cattle – especially BVDV and Johnes disease. With the executive, a set of guidelines will be developed as a service to the Australian Cattle Vets Association members.

A New Zealander by birth, Mr Foran, 53, served in a number of senior roles at Woolworths over ten years, including a term as managing director of Woolworths Supermarkets, until his departure in 2011. He has been with Walmart for nearly three years, and was president and CEO of Walmart Asia, after previously leading its China operation. He is the father of National Rugby League star, Keiran Foran, who plays with Manly. He and his wife will soon move from Hong Kong to Walmart’s head office in Arkansas.

Being offered the role was an acknowledgement that anyone could move to the top in the business world, he said. “You work hard and you learn your trade and get the results and if you’re in the right spot at the right time, you can get a chance. I think it shows the world is becoming more global – maybe in some ways a little less local.” Woolworths CEO Grant O’Brien said Mr Foran was a talented retailer. “Greg is one of the many world-class retailers to have worked with Woolworths over the years.  Woolworths has an impressive track record in developing talented retailers, both past and present. Greg’s new role adds to an impressive list of accomplishments of the Woolworths alumni,” Mr O’Brien said.

He spent four years as chief executive at NFF, before resigning recently. Prior to that he spent six years as general manager corporate & customer operations with Murrumbidgee Irrigation, and a further six years as executive director with the Ricegrowers Association of Australia. Australian Agricultural Co managing director Jason Strong has been awarded life membership by the board of the Australian Beef Industry Foundation. The award comes in recognition of Mr Strong’s many years of service as ABIF chairman.

In making the presentation at a recent dinner at Marcus Oldham College, the current ABIF chairman John Gunthorpe said ABIF was in debt to the years of effort Mr Strong gave to the foundation in providing scholarships and other activities to inspire careers in the beef industry. “In awarding this life membership, our board recognised the difficult circumstances voluntary board members face when giving of their time to a charity such as ABIF and the zeal and commitment Mr Strong demonstrated in leading our organisation,” Mr Gunthorpe said. The presentation ceremony was conducted as part of the Marcus Oldham Rural Leadership Program.

“There is no service more rewarding than providing young members of our industry with the ability to expand their knowledge and networks in the formative period of their development,” Mr Strong said, while accepting the award. His career path changed when he won a scholarship to the US and spent time with a meat scientist understanding the US grading system. This motivated him to return to Australia and devote the next few years of his career to helping develop a meat grading system reflecting eating quality for our consumer, become part of the team that formulated Meat Standards Australia.

“I encourage all here to find their special area of interest within our industry and follow their passion,” Mr Strong told the award ceremony. 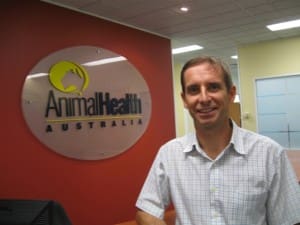 The Medal was established in 2011 to honour masters by coursework graduates who achieved academic excellence and who contributed to enriching to life of the University and the community. Rob was nominated by the University of Sydney’s veterinary science faculty for the award, not only because of his academic performance, but also because of his positive impact on the broader community.

As part of his Masters of Veterinary Public Health Management, Rob was involved in the development of a game that improves the awareness of rabies control in countries where the disease is endemic. ‘Dogsville’ is a role-playing game where children learn about preventative measures against rabies, such as vaccination and other ways to be a responsible pet owner. The Food and Agriculture Organisation of the United Nations (FAO) provided funds for the production and distribution of the game in the Philippines for World Rabies Day 2013.

Additionally, as part of Rob’s dissertation he worked with the Tablelands Livestock Health and Pest Authority (now Local Land Services) investigating possible risk factors associated with foot abscesses in sheep.  This involved a survey of around 115 sheep producers on the central tablelands of NSW.

Meanwhile, another AHA staff member who has demonstrated excellence in his field is Dr Peter Dagg, Manager AusVetPlan. Peter has been nominated for the Australian Institute of Management (AIM) 2014 excellence awards in the ‘Not-for-profit Manager of the Year’ category. The not-for-profit sector makes important contributions to society and the economy, the impacts of which are sometimes overlooked.

This award recognises outstanding managers who have transformed cultures, helped develop individuals in their organisation and have managed the demands of stakeholders. Peter’s nomination is recognition by AHA’s board, staff and other stakeholders in showing excellence in management and leadership.

As the manager of the world-leading AusVetPlan, Peter is responsible for ensuring that Australia has a unified and agreed approach in times of animal disease emergencies across animal management, communications, and implementation and coordination of effective policy and strategy.

Mr McKie previously worked for IBT Trading, where he was director of sales and marketing. IBT provides a service that enables Australian meat packers the opportunity to market their wet salted cattle hides directly to tanners in the international hide market. Prior to that he worked in hides and value-added by-product sales and marketing at JBS/AMH.

Strengthening the links between the feedlot industry and Hereford producers is a key aim of the breed’s new commercial development officer, Liz Pearson. Ms Pearson, from Guyra in NSW, took up her role at Herefords Australia last month after a solid career in the feedlot and animal health industries.

“This position is about strengthening relationships with industry bodies and further developing pathways to market, with a key focus on feedlots, the European Union market, Meat Standards Australia and Certified Pasturefed,’’ she said.

Ms Pearson, 32, graduated from the University of New England with a Bachelor of Agribusiness, and went on to work at Teys Australia’s Jindalee feedlot in southern NSW.

She then spent five years as the southern Australia feedlot sales manager for Elanco Animal Health.

Her family run a commercial beef herd at Guyra, supplying cattle to the feedlot export trade and domestic supermarkets.

Ms Pearson will be responsible for extension and commercial projects, including the progeny test project, Hereford Hybrid trial, Hereford steer evaluation and feedlot trials. Her role also extends to identifying live export markets and working with export-focused businesses, and promoting the value of Hereford genetics in commercial crossbreeding programs.

His career in the stock agency game spanned 50 years, starting in 1965 at Melbourne’s Newmarket saleyards, then at Echuca with Younghusbands followed a stint with AML moving throughout Victoria for 15 years learning the trade. The merger between Elders and Younghusbands in 1970 was followed by a move to Dubbo in 1985 and after 12 months at the Dubbo saleyards, he became part of a formidable Elders stud stock team, where he served for the next 43 years.

“His straight-talking, ‘no bull’ attitude has caught many a breeder off guard, but it’s exactly that which made John Horne a name – and face – respected by the stud cattle industry,” fellow agent Tony Fountain said in a tribute penned over the weekend. “John built a formidable and deserved reputation as a stud stock agent and the sadness of his passing is all the greater in that having retired in 2012, he has been lost to his family and community,” Mr Fountain said.

Six months after joining Elders stud stock team, working in both sheep and cattle, he convinced his boss, Tony Dowe, to let him specialise in cattle. He was closely associated with the emergence of the Simmental breed, and also worked closely with Shorthorn, Maine Anjou, Angus and Red Angus breeders. Within five years John built a solid clientele among NSW and Victorian stud cattle breeders.

“I told them you get the cattle right, I’ll market them for you. But you can’t be an agent without honesty, and without telling people things they don’t want to hear,” he said in an interview around the time of his retirement.

Funeral details have not yet been announced, but will be advised early this week through Elders Dubbo.

AgConnectWA, WAFarmers’ group for young people with an interest in agriculture, elected a new president and vice president at its annual conference last week.

Mr Blake thanked the outgoing president, Andrew Whitelaw, for his dedication to connecting young people in the industry, and said he was eager to continue the job.

“AgConnectWA is not just for farmers – it is for anyone with an interest in agriculture, whether they study it, work in the industry, or just want to meet like-minded people and build their networks,” he said. “Our membership has been rapidly growing and the committee is looking forward to keeping that trend going.”

The former head of OSI’s Australia operations has been seconded to a new company role in China, following the recent food safety breaches involving the manufacture of burger patties and chicken nuggets for takeaway giants, McDonald’s and KFC.

OSI Group announced sweeping management and operational changes at its Shanghai processing plant a week after a Chinese television report based on an undercover investigation revealed unacceptable food safety practices, including processing expired meat products. OSI has already shut down the plant, withdrawn its products from the market and apologised publically.

OSI group president and CEO David McDonald announced that the company’s China operations will become a part of the OSI International umbrella, directly embedded into the corporate organisation, rather than operating as a separate entity. Leadership responsibilities for China operations have also been reassigned effective immediately.

“The OSI International China leadership team will include experienced individuals from around the world to ensure full compliance with the OSI Group’s world-class standards for quality,” Mr McDonald said.

As part of that process, Brent Afman, senior vice president and a direct corporate employee with the company for 20 years, will become managing director of the Asia Pacific region, with responsibility for China. Mr Afman was previously responsible for the company’s operations in Australia, Taiwan and two US facilities.