Is this the next big thing for red meat marketing in Australia?

Steaks, sausages and ham are now available 24 hours a day from a red meat vending machine installed outside a butcher’s shop in Paris.

The dispenser was installed this week outside a butcher’s shop in the fashionable 11th arrondissement. 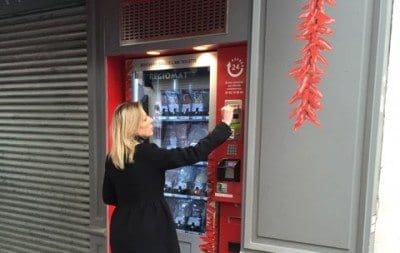 “The vending machine offers a selection of our products which we prepare and vacuum-pack ourselves,” said Florence Pouzol, owner of the Basque boucherie, L’Ami Txulette, told the UK Telegraph.

“We wanted to give our customers an additional service when the shop is closed.”

The Telegraph said the introduction of the meat dispenser is in line with a trend to make fresh produce available 24 hours a day, despite strict laws governing Sunday opening and the reluctance of many shops to open seven days a week.

Paris got its first 24-hour baguette vending machine in 2011 when a baker installed one next to his boulangerie. Since then, hundreds more have been installed across the country.

It is France’s fifth meat vending machine. The other four are located in the provinces.

The owner of a delicatessen that installed one last month said people come from far and wide to buy its andouillette, a strongly-flavoured sausage made with pig’s intestines.

“We see people walking past and looking at our display on Sunday afternoon, but we’re closed then. We can’t work seven days a week so that’s why we decided to install the machine,” the shop’s owner Pascal Bidron, said.

The same report said there are 500 meat vending machines in Germany.

Not everyone supports the idea, with traditionalists saying it will lead to the demise of craft butchers, bakers and cheese shops.

“I oppose these machines because they stop people coming into our shops,” said Emmanuel Gripon, an official of the French Bakers’ Federation. “It’s contributing to the desertification of the countryside and it harms the social life of communities.”

However, many people welcome the machines as a convenient source of fresh produce.

François Joly, 26, who lives near the Paris meat dispenser, said: “At first you think it’s strange, but then you realise it might be a good way to buy meat if you work late and feel like a steak when you get home.”

However, another local resident, Véronique, a pensioner, said: “I find the idea of buying raw meat from a machine a bit off-putting. It’s impersonal, and what if the refrigeration system fails?”