Opinion: RSPCA’s divided attitudes to the welfare of pets and livestock 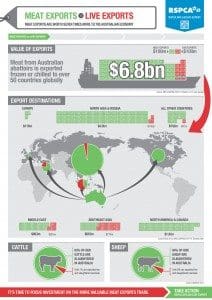 One of several infographics that formed part of the RSPCA’s recent campaign to shut down the live export trade.

The national office of the RSPCA has launched an online campaign calling for an end to livestock exports, replete with infographics about the industry, and quick links to enable supporters to send emails to the media and politicians.

The thrust of the campaign material is that livestock exports subject animals to highly stressful sea journeys, cruel treatment in destination markets, and unacceptable slaughter practices.

There are several major flaws with the RSPCA campaign.

The first is the assumption that if Australia did not export livestock, overseas markets would be forced to switch to processed meat imports. Given the steady and continuing growth in the global livestock trade, and Australia’s declining global market share, this assumption is absolutely unfounded. Australia’s withdrawal from these markets would simply benefit alternative suppliers, which include a large number of developing nations which do not have Australian-equivalent animal welfare standards either in their domestic market, or as a requirement associated with their livestock exports.

A second major flaw is the assumption that all of the stock currently exported live could simply be diverted to an Australian processing facility and economically converted into processed product. This is clearly not the case, even though the newly commissioned Darwin abattoir has finally added some cattle processing capacity in northern Australia. In the case of both live sheep and live cattle exports, the presence of the live export market provides important additional competition for Australian livestock, especially during drought periods when a large proportion of sale stock are not at normal slaughter weight.

A third major issue with the RSPCA campaign concerns the major contradictions that are evident in the approach the organisation takes to different animal welfare issues. The contrast in the approaches the RSPCA takes to the mistreatment of domestic pets and the live export industry are an obvious example.

A great deal of the RSPCA’s resources in Australia are directed towards the management of lost, abandoned or injured domestic animals. According to annual statistics published by the RSPCA, in 2013–14 the organisation took care of 127,304 lost or abandoned animals, of which 36% were dogs, 39% were cats, and 25% were other animals. Of these, approximately 38,000 or 30% were in such poor condition that they had to be killed.

In 2014, by comparison, there were 389 shipments of livestock exported from Australia, involving a total of 3.56 million head of livestock. According to statistics compiled by the Department of Agriculture, there were a total of 17,805 mortalities during these voyages (a mortality rate of just 0.5%).

These statistics highlight that the number of animals that the RSPCA had to kill in Australia in 2013–14 as a consequence of mistreatment or lack of care was almost twice the total number of livestock that died during live export shipments.

If the RSPCA believes that, as a consequence of the number of deaths that occur during shipment, livestock exports should be banned, then logic suggests that a proportionate response is also required in relation to pet ownership in Australia.

A proportionate response based on the above data would be for the RSPCA to call for the ownership of domestic pets in Australia to be banned, or at the very least subject to much more stringent controls including all breeders being registered and having lifetime responsibility for the welfare of their animals; mandatory accreditation and annual licences for pet owners; mandatory microchipping of all pets; and heavy penalties for both breeders and owners in the event that those animals end up being cared for by the RSPCA.

The fact that this is not the case suggests that the RSPCA national office has other motives in calling for the banning of live exports, which are possibly more related to the increased competition for public support and revenue that has arisen between different animal welfare or rights groups in Australia, than they are to animal welfare concerns.

Irrespective of the reason, the approach that is being taken by the RSPCA, despite the significant animal welfare improvements the live export industry has made, will increase the divide that exists between that organisation and the farm sector, and will also alienate the RSPCA from policy-makers. This will reduce the potential for future cooperation between the RSPCA and farmers, cooperation that in the past has resulted in significant improvements in farm animal welfare in Australia.