Mark Twain famously wrote “It’s easier to fool people than to convince them they are being fooled”. 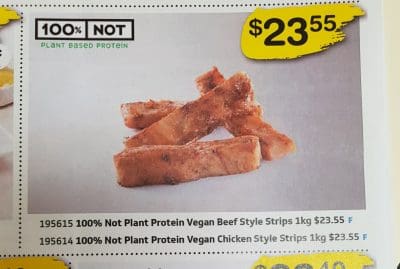 If using the Beef name and image didn’t help the Alternative Protein industry attract investors and sell their products, they simply wouldn’t do it.

Why not sell a Zucchini as a Broccoli-less-broccoli? Or Pork mince as Beef-less-Beef-mince?

Because you can’t under the Food Standards Code of Australia and New Zealand (the Code).

Because it would confuse the consumer.

We need our Federal and State Governments to mandate truth in labelling of Alternative Proteins.

The Code must be expanded to include regulations about the language, symbols and claims made by Alternative Proteins to avoid consumer confusion, potential health issues from wrongly assumed nutritional profiles and to protect the livelihoods of the 80,000 red meat business in Australia against unverified claims about the environment and animal welfare.

Consumer safety is governed by compliance to the Code.

Whole, or part of the carcasses of… buffalo, camel, cattle, deer, goat, hare, pig, poultry, rabbit or sheep…or any other animal permitted for human consumption under a law of State Territory or New Zealand.

What it does not contemplate is the new group of “Alternative Proteins” – man made products that are borrowing the goodwill of the Beef or Meat name and imagery for a completely different product.

The Agricultural Minister, Hon David Littleproud, asked the industries involved in this issue to form a Truth in Labelling Working Group to investigate this problem.

A discussion paper of outcomes was created and forwarded with a covering letter to the Minister.

Regrettably, the Minister was let down by the vested alternative protein commercial interests and lobby groups, with the resulting discussion paper not presenting credible peer reviewed data.

A majority of representatives from commercial alternative protein manufacturers and vested interest lobby groups put forward unfounded arguments against the regulation of alternative proteins and recommended to the Minister that only voluntary or opt-in guidelines should govern Alternative Protein labelling.

There are three major issues relating to truth in labelling of Alternative Protein products that any change in legislation must address:

Consumer confusion at Point of Sale

There is demonstrated evidence of consumers mistakenly buying the wrong product.

This is hardly surprising given supermarkets choose to put them next to each other and Alternative Protein products use our name and imagery.

Food Frontier, an organization that represents the Alternative Protein industry, commissioned research from Colmar Brunton which reported 9 percent of participants had mistakenly bought the wrong products.

One the most damaging aspects to untruthful labelling is the potential health impacts of creating a false association in consumers minds between nutritional benefits of Beef vs Alternative Proteins.

The Food Standards Code must be amended to cover bio availability in nutrients claims, and to recognise the differences in nutrients, to ensure the consumer gets the health benefits that products are claiming.

Verification of claims and statements

How does the replacement of a low input bio diverse production system with a monoculture lead to better outcomes for the environment?

The Beef industry undertakes a lot of administration and rigor to verify our claims, be they organic certification, PCAS or other grass-fed programs.

If a business wants to claim “no pain” in their alternative protein product or on their website they must be required to verify that no pain, including the killing of insect and small animal species, occurs at any level of its production system.

Australian Beef producers have started to sell carbon generated in production to multinational corporations. Our industry is committed to being carbon neutral by 2030 and has already reduced our CO2 emissions by 51.46% from the 2005 baseline. Rather than making broad unverified messages, we are doing the work and our ability to truthfully tell our story should be protected from unverified attacks.

Unfortunately what the Minister received from the Truth in Labelling Working Group was a world according to the Alternative Protein industry.

The Alternative Protein industry argued that overseas research which demonstrates consumer confusion is not relevant in the Australian context. They have simply ignored the research presented in the discussion paper and commissioned by the Alternative Protein industry that reported 9 percent of participants having mistakenly brought the wrong product.

The forwarding letter sent from the Chair of the Working Group, on National Farmers Federation (NFF) letterhead, said no consensus was achieved in the group due to the red meat industry wanting a regulatory outcome.

In other words, the red meat industry wants Alternative Proteins to be regulated under the Code, just like we are.

All other Working Group participants, which included an NFF employee and the CEO as Chair, agreed to voluntarily guidelines only for Alternative Protein makers, allowing terms such as “Beef less Beef”.

At the Beef Australia 2021 Leadership forum, NFF President Fiona Simson supported the Working Group position arguing we did not want “more regulation and red tape.” [Apparently making Alternative protein labelling subject to voluntary guidelines will provide plant based proteins the opportunity to feed the world.] Why this doesn’t stack up?

1. We are not looking to further regulate the some 80,000 red meat businesses, but a small group of alternative protein companies.

2. There is minimal government cost to this regulation. Each manufacturer is responsible for undertaking internal and independent external audits to the code.

3. Imported soymeal is a base for many of the current Alternative Protein products available. We are not even advancing Australian crop farmers in this equation!

4. There is no export opportunity for products that do not use prescriptive definitions (describe what they actually are) under the current export legislation.

The Food Standards Code needs to be brought up to date to correctly reflect risks to consumers.

There is clear evidence of consumer confusion between products.

Legislation must be introduced to ensure any environmental and animal welfare claims on packaging are verified, protecting the consumer and the Beef industry.

I wish the manufacturers and investors in the Alternative Protein industry every success with their products marketed with their truthful product name and claims.

I will happily buy a tray of mushroom mince, or a chickpea sausage, as long as we all operate under the same regulatory framework.

After all, the role of the Food Standards Code is to ensure that no one can be fooled.

Earlier today Beef Central asked the National Farmers Federation to clarify where it stands on the issue of whether a regulatory or voluntary approach is needed on the issue of truth in labelling around plant-based proteins.

The NFF responded this afternoon with the following comments from CEO Tony Mahar:

“The NFF Supports truth in labelling. We absolutely do not support non-meat products masquerading as meat.

“It’s potentially misleading to consumers and in worst cases an insult to farmers, that manufacturers continue to incorrectly label for example faux meat products as ‘bacon’ featuring a pig or ‘chicken not chicken’.  The Working Group, which NFF was asked to chair was formed to identify options to address the concerns and report to Minister Littleproud as to how to begin to address this important issue.

“The report to Minister Littleproud, was clear that the  Working Group did not support the continuation of words such as ‘beef’ or ‘mince’ be used to describe on products that were not meat. The majority of the working group endorsed a voluntary approach to address the alternative protein manufacturers approach to such industry concerns.”