Opinion: GM salmon may be safe, but it’s not coming to a store near you just yet

When the US Food and Drug Administration gave the go-ahead last month to genetically-modified salmon, it marked the first time any GM animal protein had been cleared for human consumption. So what does this landmark approval mean for the future of the food on our plate? Professor Graham Mair* outlined the issues in this article in The Conversation this week.

WE have all, most likely unknowingly, eaten products that have contained some form of genetically modified (GM) crops, which remain controversial to some consumers despite having been under commercial production for nearly two decades. 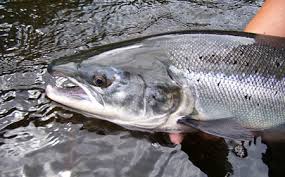 But when the United States Food and Drug Administration (FDA) gave the go-ahead last month to GM salmon, it marked the first time any GM animal protein had been cleared for human consumption.

Until then, GM animals had remained the preserve of movie makers (ever seen the 2004 television movie Frankenfish?) So what does this landmark approval mean for the future of the food on our plate?

The transgenic Atlantic Salmon was first developed by a Canadian Biotech company, AquaBounty Technologies, more than 20 years ago. Its AquAdvantage salmon incorporates additional copies of a growth hormone gene from another salmon species.

Fish were the subject of early research on GM animals because they are easy to manipulate. Research demonstrated that the GM salmon grew nearly twice as fast as normal salmon and had slightly improved food conversion efficiency.

The FDA has taken nearly 20 years to determine that, under certain conditions, this fish is safe to eat, represents no risk to the environment, raises no significant animal ethics concerns and that the claims made for its performance are valid.

The AquAdvantage salmon is safe to eat, says the FDA.

While the original goal may have been to produce GM salmon seed stock for sale to salmon farmers, AquaBounty’s current goal is to be a producer of high quality and affordable salmon.

This is reflected in the details of the FDA approval, which restricts production to only two sites – a hatchery in Canada and a production facility in Panama – both managed by AquaBounty.

As a result, the scale of production of GM salmon will be a tiny proportion of the 2.1 million tonnes of salmon the International Salmon Farmers Association says is produced annually around the world.

The ISFA remains opposed to transgenic salmon production, standing firm on a position it first took back in 1996. Given such opposition by the salmon industry’s global peak body, how do we know it’s still safe?

In 2007 I contributed to a review of risk assessment for transgenic fish and virtually every measure of containment of this risk is being applied to the production of this GM salmon.

The fish can be produced only in the land-based facilities in Canada and Panama with physical barriers preventing it from ever reaching the sea (which in any case would be too warm in Panama). Even if any fish did manage to get to sea, the GM salmon are all-female and sterile so would have no chance to breed with each other or with wild salmon.

Perhaps one surprise from the FDA approval was that no requirement was imposed to label the fish as a GM product because, it said:

Thus any identification of GM fish product in the marketplace will be voluntary. Our domestic market is well served by the Tasmanian salmon industry and any sale of imported GM salmon in Australia would require specific regulatory approval by our food standards authority.

Given that the GM salmon will be produced by only one company and in the Americas, we are unlikely to see GM salmon on our fishmonger’s slabs any time soon.

It is difficult to predict the market response to GM fish. In a quick survey of my students, half said they were happy to eat GM fish, rising to 75pc if the fish was cheaper.

But there are likely to be vocal opponents to the marketing of GM fish and large sectors of the aquaculture industry will be concerned about being tainted with negative perceptions.

Australian aquaculture has a global reputation as a supplier of high quality, sustainable seafood and has already distanced itself from any notion of producing GM fish.

The future of other GM fish

Perhaps the most significant impact of the FDA approval will be that it may be a catalyst for approval of other GM fish produced in other regions. During the heyday of research on transgenic fish, numerous GM fish were produced around the world.

Approvals of other GM fish may not be the result of such rigorous evaluation or may not require the same tight conditions imposed on the production of AquAdvantage salmon and thus come with more risks attached.

But why do we need GM fish anyway? It can be argued that the genetic gains from producing GM fish can be won using more traditional genetic approaches, such as selective breeding.

GM produces a one-off gain with potential to improve target traits in a shorter time frame. It can also develop traits that are difficult to improve using traditional selective breeding, but this may be at the cost of declines in other traits.

Since the development of the first GM fish over two decades ago, GM technology has now been applied to a range of higher organisms including pigs and cattle. The approval of the GM salmon can be seen as a validation of the technology, but this approval is so specific to the properties of this particular program that it is unlikely to open the floodgates for widespread approvals of GM animals.

But the power of the technology is such that, with the increasing pressure to meet rising demand for food, I believe we will see more GM animals entering the marketplace in the foreseeable future.

This article first appeared on The Conversation. Click here to view.