Is blockchain a hidden source of efficiency for the meat supply chain?

In his second article on the emergence of data rich disrupters in the meat industry, former Australian Meat Processor Corporation executive chair Peter Noble looks at why the emergence of blockchain is a development the red meat supply chain cannot ignore.

(If you missed it yesterday, you can read part one here)

SO, what could a data rich red meat industry look like in 2030?

And what else is Amazon doing?

Amazon is doing a lot. But let’s have a look at recent developments in Amazon to see how the Wholefoods investment might play out?

Amazon, like many other companies, is now focussed on blockchain and some form of distributed ledger technology.

Mentioning blockchain in the meat industry is a dangerous proposition as many think it is a dead technology, but I think otherwise.

Perhaps direct investment in the technology is finished, but, with so much investment by so many global corporations in blockchain, it is a sleeper.

Anyway, back in Australia, it’s time for another red wine. The one I have found from Languedoc is perfect. A small producer has produced a wine called “Le Fou” which is of course French for “The Madman”, it’s a more than fitting name for a winemaker bonkers enough to grow Pinot Noir in the very south of France, miles from its proven home in Burgundy; and a fitting name for a processor examining the role of blockchain in the supply chain.

Anyway, proving that crazy can often translate into crazy good in the right hands, this Languedoc born light Pinot Noir from French winemaker Le Fou may have many of their compatriots turning up their noses, but it’ll have you drinking the day away in style.

Could it be that blockchain is a hidden source of great efficiencies in the meat industry supply chain? I think Amazon thinks so and I am sure Wholefoods will be in the thick of it.

Anyway, looking into the depths of the Pinot from Languedoc my thoughts return to my rather self-indulgent middle age Bbockchain studies at Oxford University.

But what is blockchain? In short, it is a distributed ledger technology. 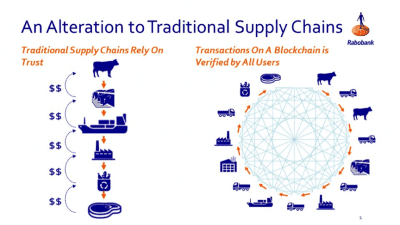 An image produced by Rabobank to illustrate how blockchain technology can be used to transform verification processes and transparency in beef supply chains – see original article here. Click on image to enlarge.

A distributed ledger is a special type of ledger in which transaction records are distributed across a network encompassing various locations and institutions. Each participant in the network possesses an identical copy of the ledger. As a result, when a change is made to the ledger, it is propagated and reflected in all copies held by the network participants (the speed of this process is dependent on the network type, however, with some networks requiring several seconds or even minutes to propagate and reflect changes. Distributed ledgers maintain the security by deploying cryptographic keys and signature to control access and permissions in the shared ledger.

So in summary, blockchain is a decentralised shared digital ledger that relies on the consensus of a global peer network to operate. More precisely, Blockchain is a type of distributed ledger for maintaining a permanent and tamper-proof record of transactional data. A blockchain functions as a decentralized database that is managed by computers belonging to a peer-to-peer (P2P) network.

The blockchain is an even more potent technology.

It is a shared, trusted, public ledger that everyone can inspect, but which no single user controls. The participants in a blockchain system collectively keep the ledger up to date: it can be amended only according to strict rules and by general agreement.

Here we need to visit the famous paper published by the secretive Satoshi Nakamoto. His original concept was for a peer-to-peer electronic cash system; a system which allowed for payments to be sent directly from one party to another without going through a financial institution. The currency in which the payment was made became known as Bitcoin.

Blockchain was the software that was developed to enable the payment to be made without the involvement of the regulatory bodies.

Blockchain is as IBM states, a team game. It needs to run alongside a symphony of other technologies, such as, AI, nanotechnology and IoT, backed by a close working relationship with relevant industry players.

Done well, blockchain, is a fundamental building block of a transparent value chain, making it easy for stakeholders to stay compliant, to drive efficiencies and to create unique value propositions in an increasing competitive global market.

There is little question that blockchain is quickly becoming a profitable sector. While it was long tied to cryptocurrencies’ ebb and flow, the technology has since shed its chains and become a key driver of innovation. Most of the change and disruption has been propelled by developers, entrepreneurs and smaller companies, but large corporations have started to see both its value and virtue. This is evident from the many partnerships announced between blockchain start-ups and major corporations.

For Amazon, however, the need to incorporate blockchain tools has two distinct faces: changing trends in the eCommerce and consumer sector along with seeking avenues to expand its increasingly vital AWS platform.

Why is this relevant? China has just become our largest red meat customer and similarly an important market for the wine of Languedoc.

Let’s have a look at what Xi Jinping had to say recently about blockchain:

“[We must] clarify the main direction, increase investment, focus on a number of key core technologies, and accelerate the development of blockchain technology and industrial innovation.”

JD.Com which has considerable investments in the new technology says:

while Alibaba has just started a pilot, the aim of which is to promote:

“product authenticity and provide a safe and trusted marketplace for consumers” for brands popular with Chinese consumers.

The application of blockchain cannot be ignored so let’s see what use cases might be applicable for the red meat processing industry.

Monday: How do we prepare for this new blockchain market place?