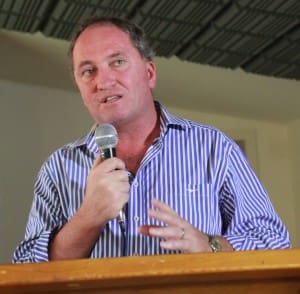 My parents are grass-fed beef producers. So am I.

When my time is done in public office I intend to be a bigger grass-fed beef producer, so I am invested in this process, just like you.

When beginning this process back in late 2013 my intention was to provide for a better democratic outcome for grass-fed beef producers.

My vision was to create a viable and democratic representative organisation that, without fear or favour, can advocate on behalf of grass-fed beef producers, can oversee levy investment that delivers real and beneficial outcomes to producers and deliver more transparency in how levy dollars are spent.

It was my hope that we could get to a point where the industry had a representative organisation that encompassed all views and represented them to government with a more or less united voice. Some may see this as being inherently naive.

In any case that remains my goal. What we have in front of us in this government response is a way forward; it is not the be all and end all, and seeing this goal come to fruition will certainly require industry to continue to work together and push in the same direction.

We now have a strong desire from all sectors in the industry to see the creation of a directly elected representative organisation, whereby if you can earn the endorsement of your peers within your region or ‘electorate’ then you can represent them on the national level, no matter which group you support; CCA, CCP, ABA, AMPG, USA and the list goes on.

We must see the creation of that body but to get there we must have a mechanism through which levy payers can have their say and vote accordingly on the election of representatives to this group. That work is happening right now but it will take time, possibly 12 months or more.

We will ensure that this new organisation has greater oversight over how the levy is invested by seeking to update the industry Memorandum of Understanding to strengthen the rights and responsibilities of the peak industry council. It is envisaged that it will be the role of the representative organisation to devise an annual work plan in conjunction with MLA which will be available for public comment prior to being ratified. And we will also continue to work with MLA to give greater clarity and choice in board appointments, including that of the MLA board’s selection committee.

We are ensuring that MLA will be subject to an independent performance review this year to address concerns raised in the inquiry about the efficacy of how the levy has been spent. We will not abolish RMAC, as the organisation does have a function to perform in administering the industry fund however they do need to lift their game and I have asked RMAC to outline to me how they intend to do so. On RMAC, it is true that under the scheme rules that govern the fund, if they were to be abolished the money would simply be returned back to consolidated revenue, in other words the Treasurer’s pocket.

We will not be revoking the MLA Donor Company’s status as it does facilitate much needed investment projects that are beneficial to the red meat sector overall. Again however MLA, AMPC and Livecorp need to vastly improve the manner in which the benefits of projects invested in by the Donor Company are communicated to levy payers. Similarly there needs to be a much greater focus on the application and extension of these projects so that people can touch and taste the benefits.

As for transparency in the supply chain, we all want more of that. Through the Agricultural Competitiveness White Paper we are delivering $11.4 million to establish an ACCC Commissioner with specific responsibility for agriculture. Additionally, MLA has already invested in a project to identify areas for improvement in supply chain transparency and I am eagerly awaiting the outcome of that process.

There are a few realities in this situation, one being that as Minister I do not have the legal authority to arbitrarily require the redirection of any, or all of the levy to any organisation; that responsibility rightly lies with levy payers.

The Cattle Transaction Levy is collected using Commonwealth taxation powers. That means it is no different to your income tax, once collected it belongs to the government. The levy system then being what it is, that money is returned to industry via a research and development corporation, in this case MLA. MLA has to be accountable for the expenditure of this money – it cannot participate in agri-political activities (like opposing the live export ban) and it must front the government on a twice yearly basis, plus up to four times a year to justify itself through Senate Estimates.

If recommendation 1, to redirect the whole grass-fed levy to a new research and development corporation was to be fulfilled as it is written, the new body would be accountable to the federal government every step of the way, forever more. Given that producers want a representative organisation that can fight on the industry’s behalf, such a new body would merely become a whipping horse for industry frustration to an even greater degree than it is now.

Alternatively, I believe producers want a fearless organisation that is free to fight for the industry, and not be hamstrung by the machinations of bureaucracy. In short, we will not be fulfilling recommendation 1 as it has been written.

I understand however that there will be proposals developed by Cattle Council in accordance with the levy principles and guidelines over the coming months to be taken to a vote of industry levy payers. I anticipate that such a proposal would seek to redirect a portion or otherwise of the levy to a new representative organisation and I have given my commitment, should such a vote achieve convincing support, to assist where possible.

If this new representative organisation can develop the capacity to generate its own revenue, then it will be accountable to no one but its members. It would be free to pad the pavement of parliament to lobby on behalf of the sector and could objectively direct MLA on the use and expenditure of the grass-fed levy.

I am committed to helping Cattle Council evolve into this new organisation but to succeed it will take you, as levy payers, re-engaging in the future of the industry to drive the outcome you want. Government cannot, and should not impose a solution on an industry as vibrant and dynamic as the grass-fed sector – and it is for that reason the government’s response to the Senate Inquiry seeks to provide a pathway forward so the industry can control its own destiny.

Right now cattle are worth extremely good money. We have three new free trade agreements to improve our competitive position in these major markets, six new live export markets to diversify the demand for live animals and help us deal with issues such as the decrease in third quarter permit allocations for Indonesia. The overall demand for our product has never been stronger.

We have delivered a White Paper which focuses firmly on improving the profitability of the family farm, and one that represents the biggest government investment in agriculture in generations while providing a strong policy vision for the future.

This government can get the trade deals done, open the markets and provide the incentive but at the end of the day it’s producers that need to drive their industry to get the job done. I appreciate the work of the Senate Committee and all of you who took the time to participate and make submissions. Thanks to the Inquiry process, I believe that the changes which are already in motion, and those indicated in the response will assist industry to put itself in the best possible position to capitalise on the significant opportunities that lie ahead.