Opinion: Is Richard Branson a knave or a fool on beef greenhouse emissions? 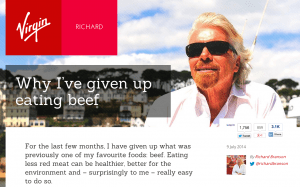 Richard Branson explains why he has given up beef on his Virgin web page.

In recent weeks, the owner of Virgin Airlines, Richard Branson, has announced that he has decided to give up eating beef. He has listed a range of reasons for making this decision, with the principal one being the impact of beef production on the environment and in particular greenhouse emissions. If Branson is truly concerned about this issue (and not just seeking publicity or trying to divert attention) then he should look at his own business, rather than pointing a finger at beef.

In his announcement, Branson listed a number of different reasons why he has decided to give up beef. Some of these follow (italics), with a subsequent explanation of the facts related to his statement.

Meat consumption today contributes to global warming and environmental degradation. It’s estimated that 14.5% of global man-made greenhouse gas emissions come from livestock – which is more than the contribution from all forms of transport. Beef production makes up 41% of those emissions.

According to the Intergovernmental Panel on Climate Change Working Group IIIassessment report, which is now at a late draft stage, Branson’s statement is completely wrong. Currently, the IPCC estimates that global anthropogenic (man made) greenhouse gas emissions are 49 Gt CO2-e per year. Of these, direct ruminant livestock (enteric emissions) are estimated to be around 2 Gt CO2-e (4.1%) of total emissions, and emissions associated with manure management (which is sourced from all farmed animals including cows, sheep, pigs, poultry and dairy) amount to another 0.2 – 0.4 Gt CO2-e per year. So at best, all direct livestock emissions amount to less than 5% of annual anthropogenic emissions. By contrast, the IPCC reports that direct emissions from the fuel used in transport are 7.0 Gt CO2-e per annum. It is also worth noting that emissions from livestock are estimated to have decreased over recent years, whereas emissions from transport are growing relatively rapidly.

Last year, Brazil reported a 28% increase in Amazonian deforestation – 80% of deforested land in Brazil is then used for cattle farming. This results in a huge loss of biodiversity.

The reported 28% increase in deforestation in Brazil last year is a very misleading figure. Prior to 2009, annual deforestation rates in Brazil were in the range of 12 – 15,000 square kilometres per annum. Strict controls were introduced in 2009, resulting in clearing rates dropping rapidly, to 4,600 square kilometres in 2012. In 2013 the Brazil government introduced some legal changes and an amnesty on prosecutions of land that had previously been illegally cleared. As a consequence, recorded clearing rates for 2013 increased to 5,800 sq kilometres, still well less than half the annual clearing rates pre-2009. So Branson could have equally correctly stated that annual clearing rates in Brazil have decreased by 60% since 2009.

But the real error in Branson’s statement is to link land clearing in Brazil to cattle production. The reality is that most of the clearing is for soy bean production, as a recent Guardian article makes clear. The reality is that the booming demand for soy beans and the high returns per hectare available from them makes land clearing and development viable – something that is not the case for beef production. Consequently, land is being converted from cattle production to soy production.

It must be somewhat embarrassing for those so hell bent on finding reasons to criticise livestock production to discover that the main driver of land clearing emissions is actually demand for soy beans – a key ingredient in many foods, such as tofu, that are consumed by vegetarians!

Modern beef farming is also a huge drain on water resources. A 2010 study calculated that it takes 1799 gallons of water to make just 1lb of beef.

There are endless different estimates of the water footprint of all sorts of different foods, and many of them suffer from inconsistent definitions and poor assumptions. Some of the more extreme estimates – such as the figure quoted by Branson – have been largely discredited as the science of water footprinting has evolved, and more realistic assumptions have been adopted. For example, a recent, peer-reviewed paper published by scientists from the CSIRO has estimated that Australian beef production systems utilise between 3.3 and 221 litres of water per kilogram of liveweight. This equates to approximately 7.8 – 526 L per kilogram of lean meat, assuming normal dressing percentages. So while Branson’s estimate is equivalent to 15,840 L per kilogram of beef, the CSIRO puts the figure at between 8 and 526 litres per kilogram.

Just as importantly in relation to water use in beef production is the question of whether there are alternative, competing uses for the water or not. The use of even 526 litres to produce a kilogram of beef in grass-fed production systems such as are the case in Australia and Brazil is of little significance if the water was not otherwise going to be utilised for food production. In fact, given that livestock are estimated to provide about 20% of the global protein supply, the use of rain fed pastures for beef cattle or sheep production is a very important addition to global food supplies, and reduces the need to clear more land for crop production.

Cattle and other livestock don’t have to be environmentally harmful. Cows, pigs, sheep and chickens did not evolve to be shoved in a large, dark warehouse and pumped full of feed. Grass-fed cattle raised on pasture need much smaller resource inputs.

Perhaps Branson is unaware that, in nations like Australia and Brazil, both beef and sheepmeat production occurs predominantly on pastures. Perhaps he is also unaware that pasture-fed livestock systems actually result in more greenhouse emissions per unit of production than grain fed production systems, so his preference for pasture-fed meat actually results in an increase in greenhouse emissions in comparison to the alternative.

This means, of course, that Branson could eat approximately 10 beef hamburgers per day for a year, in order to have the same greenhouse impact as a single airline flight from London to Sydney, or approximately 1 hamburger per day for a year, to have the same greenhouse emission impact as travelling 1,000 kilometres in a car.
Surely, if he was really concerned with reducing greenhouse emissions, he would be encouraging people to take less flights on his airlines!
This article was first published on the Australian Farm Institute website. To view the original article click here