As reported in October, the New Zealand government released plans to tax methane emissions from livestock in 2025. The emission tax plan was open for public comment through to November 18. “The NZ red meat sector has a role to play in addressing climate change and we support an approach to pricing that would reduce emissions – but not at the expense of massive production losses and hurting rural communities,” MIA chairman Nathan Guy said.

“The proposed interim processor-level levy would be ineffective, inequitable and complex. The ag sector should also have a direct voice and seat at the table in advice and decisions on price-setting, incentive payments and revenue recycling.”

The country’s livestock industry is calling for the introduction of transitional levy relief, which is particularly important for sheep, beef and deer farmers whose only mitigation options readily available are destocking or afforestation, and will ensure viability while they transition to lower emissions production.

“The neat processing and exporting industry also believes that if farmers’ emissions are to be priced, it is only fair they receive genuine recognition for the sequestration happening on their farms to manage the impact of emissions pricing,” Mr Guy said.

MIA supported a cautious approach to methane pricing that must include the impact on rural communities, as well as food security and emissions leakage considerations, he said.

A delegation from MIA recently met with Prime Minister Jacinda Ardern and other ministers and senior officials to discuss their differences and propose workable solutions.

“As a He Waka Eke Noa partner, we welcome ongoing talks to ensure any future Government decisions have been road-tested with primary sector leaders first to get this delicate balance right. Any final solution needs to be enduring and protect rural communities,” Mr Guy said. 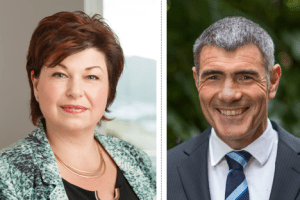 Chief executive of the NZ Meat Industry Association, Sirma Karapeeva, pictured left, said processors were concerned that a drop in production due to emissions pricing would contribute to emissions leakage offshore.

“The Government’s own modelling indicates that for every 1.6 million tonnes of emissions reduced from sheepmeat, there is 2.1m tonnes leaked globally. This equate to 133pc of New Zealand’s emissions being leaked and contributing an increase in global emissions.

Given global demands for protein continue to rise, a gap left by a drop production in New Zealand would be filled by less efficient producers, undermining global emissions reduction goals, she said.

“New Zealand farmers are highly efficient food producers and recent research shows that our beef and sheepmeat sector is one of the most emissions-efficient in the world. Our on-farm carbon footprint is half the average of other comparable countries. We want to protect and grow this production system while at the same time playing our part in reducing greenhouse gas emissions.”

“This is something New Zealanders should be proud of, celebrate and support.”

The Government’s modelling suggests a 20 percent drop in red meat production, which would have a significant impact not only on individual farmers but also the communities they live in, Ms Karapeeva said.

“A 20pc reduction would mean reduced processing volumes, jeopardising export receipts as well as employment in rural communities. The NZ sheep and beef sector contributes nearly 92,000 jobs nationally, and $4.6 billion in household income. In some regions, the sector accounts for 10-12pc of the regional economy and employment.”

The reduced production due to livestock availability or land-use change would mean higher unit costs for processors, affecting long-term profitability to the extent where consolidation or closure of plants would have to be considered, she said.

“This will affect jobs, wages and salaries, expenditure and consumption, property values, availability of amenities and hollow out rural communities.”

The NZ meat processing industry has a comprehensive decarbonisation program underway and has committed to reducing and eliminating the use of coal by 2037.

“Our decarbonisation projects will remove 1.8 million tonnes of emissions over their lifetime – that is equivalent to removing 32,000 cars from our roads,” Ms Karapeeva said.

NZ claims to be world’s most efficient

Earlier research had shown that the carbon footprint of New Zealand beef and lamb was amongst the lowest in the world.

The researchers, who compared New Zealand’s on-farm emissions to a range of countries’ footprints across the globe, concluded that when New Zealand beef or sheepmeat is exported, the total carbon footprint is lower or very similar to domestically-produced red meat in those nations.

This is because NZ is so efficient at the farm level, which represents about 90-95pc of the total carbon footprint. New Zealand’s on-farm footprint was about half the average of the other countries compared in the study.

Based on the research, an analysis by B+LNZ and MIA showed that eating red meat 2-3 times a week over the course of an entire year carried just under the carbon footprint of a single passenger’s return flight from Auckland to Christchurch.

As the world’s second biggest exporter of lamb and one of the largest beef exporters, sustainable farming is a critical part of the country’s red meat sector strategy, the bodies said.

AgResearch scientists also measured the carbon footprint of NZ beef and sheepmeat using an emerging approach known as GWP*, which determines a carbon footprint based on a product’s actual contribution to the warming of the planet over a period of time rather than total emissions.

The Intergovernmental Panel on Climate Change (IPCC) has found that the traditional GWP100 method overstates the impact of methane when this gas is not increasing, as is the case in New Zealand. The calculation using GWP* for the period 1998 to 2018 showed that when taking into account sequestration – trees and other vegetation on farms absorbing emissions – NZ’s sheepmeat is arguably “climate neutral” and beef is also well on the way towards that.

“That means over the last 20 years, NZ sheepmeat has not added any additional warming,” the bodies said. Absolute greenhouse emissions from NZ sheep and beef farming had decreased by 30pc since 1990.

MIA’s Sirma Karapeeva said the research showed consumers can feel confident that purchasing NZ red meat was good for them and a good choice environmentally.

“We know consumers are increasingly calling for transparency in the food products they purchase. Consumers are not only seeking food that tastes good but they want robust assurances that it has been sustainably raised with a minimal environmental impact.

The summary and full report can be found here.