NZ farmers to be charged for sheep and cattle emissions

New Zealand is set to become the first country in the world to have farmers pay for emissions from sheep and cattle. 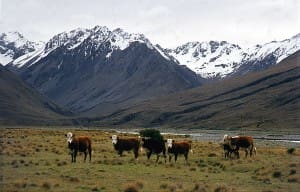 New Zealand’s Ministers for Agriculture, Climate Change and Environment yesterday released a draft plan to put a price on agricultural emissions, which is intended to reduce emissions from belching sheep and cattle.

Under the draft plan, which has been developed by government and farm community representatives, farmers will have to pay for their gas emissions from 2025.

Short-and long-lived farm gas will be priced separately, although a single measure to calculate their volume will be used.

Nearly half of all greenhouse gas emissions in New Zealand are attributed to agriculture, primarily in the form of methane.

New Zealand has approximately 10 million cattle and 26 million sheep, but emissions from these sources have so far been exempt from the country’s Emissions Trading Scheme.

The proposal includes incentives for farmers to reduce emissions through feed additives, while on farm forestry can also be used to offset emissions.

Revenue from the scheme will be invested in research development and advisory services for farmers.

“There is no question that we need to cut the amount of methane we are putting into the atmosphere, and an effective emissions pricing system for agriculture will play a key part in how we achieve that,” Climate Change Minister James Shaw said, according to a report by Reuters.

‘Better outcome than inclusion in ETS’

A joint statement by Beef + Lamb NZ and the NZ Meat Industry Association said the farm-level levy system has been agreed by all partners and is a better outcome than agriculture being included in NZ’s Emissions Trading System.

“The proposal, while not perfect, is significantly better than agriculture entering the ETS and gives farmers influence over their future,” the joint industry statement says.

“Farmer feedback was critical in refining the recommendations and the system can be further refined and improved over time as science evolves.”

However the farm sector remains concerned about the still-to-be-decided level of pricing that will be applied.

Beef +Lamb NZ  has released modelling on the financial implications of the recommendations based on over 400 individual farms.

It says the work shows that Government modelling conducted to date has underestimated the impacts on the profitability of sheep and beef farms, and therefore the emission reductions likely to occur at the prices modelling by the program.

Beef + Lamb NZ says its findings reinforce the need to take a cautious approach on the prices applied to agricultural emissions under the proposed system.

Details available so far suggest that farmers will calculate their methane and nitrous oxide emissions based on what they’re doing on-farm, not based on national averages.

Unique prices for both methane and nitrous oxide have also been recommended, recognising that they are separate gases with their own targets and progress. This would also delink them from the fossil fuel-driven ETS carbon price.

The recommendation is for a maximum 11c per kilo starting price for methane and that it be held for three years.

Farmers can get credit for their sequestration and will also get incentive payments taken off their costs for using technologies and practices that reduce emissions.

Beef + Lamb NZ says it is also continuing to advocate, along with DairyNZ, Federated Farmers and others, for the use of GWP* as a more appropriate metric for setting emissions reduction targets.

“There will be a review of the targets in 2024 and we’ll call for the targets to be reviewed using the latest science.”

More details can be found on the Beef + Lamb website here

The proposal would potentially be “the biggest regulatory disruption to farming since the removal of agricultural subsidies in the 1980s”, Susan Kilsby, agricultural economist at ANZ Bank, told Reuters.

A final decision on the scheme is expected in December.