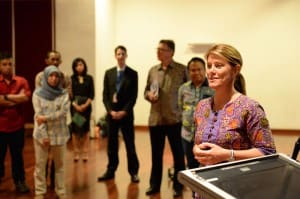 NTCA executive director Tracey Hayes addressing a function at the Australian Embassy in Jakarta in 2014.

The Board of the Northern Territory Cattlemen’s Association released a statement on Wednesday announcing that CEO Tracey Hayes, has decided not to renew her contract, and will step down from the role and the Association in September 2017.

NTCA President Tom Stockwell stated that while “Tracey’s departure is a loss to the Association and industry, we respect the great sacrifice and effort Tracey has put into the role as CEO. The CEO of the NTCA is a tough, demanding job of both time and character, and Tracey has not only maintained the standard we have come to expect, but has lifted it to new levels.”

Ms Hayes has decided to step back and devote more time to her family after three years in the role of CEO, and more than 15 years with the NTCA in a number of roles including NTCA Executive Officer, Central Australian Branch Chair, delegate to the National Farmers Federation and Vice President of the NTCA.

Mr Stockwell said that “while there will be an appropriate time to acknowledge Ms Hayes’ contribution in the future, the NTCA Board, on behalf of its members, thanks Tracey for her invaluable service and dedication to our members and Association, and acknowledges the contribution and understanding from her family, especially her mother Jill”.

The NTCA Board will begin the recruiting process shortly, and Ms Hayes will continue in the role for some months to ensure a smooth transition.