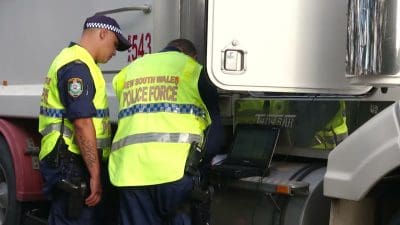 Operation Stock Check was initially launched in August 2020, and allows officers of all ranks to inspect vehicles carrying livestock to identify and target loads which may have been stolen.

Livestock theft has a significant impact on farmers across the state, with over $8.5 million worth of cattle and sheep reported stolen in the past two years alone.

Commencing this week, officers throughout the State will be increasing livestock carrier inspections and rural patrols targeting known transportation routes.

Deputy Premier and Minister for Police Paul Toole said the NSW Government’s biggest increase in police numbers in more than 30 years had delivered an additional 10 Rural Crime Investigators to help the Force stay ahead of the game and disrupt criminal activity before it occurs.

“We have more than doubled our Rural Crime Prevention Team over the past five years and now have 63 specialist investigators stationed across all corners of the State,” Mr Toole said.

“While rural crimes like stock theft may not dominate the headlines, they are a huge kick in the guts to our hardworking farmers and their families with the potential to cripple entire livelihoods. That’s why we’re ensuring police have the right resources to proactively run these operations and protect regional communities.”

“This operation is one of a number of steps the NSW Police Force is taking to protect the livelihoods of our farmers, who have enough to deal with without having to worry about criminals stealing their stock,” Assistant Commissioner Greentree said.

“Officers will also be interacting with farmers and engaging with members of their rural communities to ensure they are protecting their stock in every way they can, because prevention is key.”

“Operation Stock Check isn’t about targeting truck drivers, it’s about ensuring carriers and farmers are making the appropriate checks; including that the animals are fit to load so that when you are pulled over by police it is a simple check and you can go on your way,” Det Ch Insp Whiteside said.

“Livestock carriers can expect to see an increase in vehicle checks in an effort to disrupt the illegal transportation of stock, whether it be large trucks, small trucks, utilities, trailers or horse floats.”

Member for the Dubbo Electorate and Minister for Agriculture Dugald Saunders said the financial impact of livestock theft can be devastating for farmers.

“Our farming communities can be an easy target for those looking to do the wrong thing,” Mr Saunders said.

“We want to reassure these communities that they are not overlooked and when crime occurs, rural police will be on the case to identify and apprehend those responsible.”

The Rural Crime Prevention Team was created in late 2017 to strengthen the NSW Police Force’s focus on rural crime.

The team has since grown to 63 specialised officers dedicated to investigating rural crime, located at 26 regional locations in NSW.