NEW research on the impacts on biodiversity of ‘thinning’ White cypress pine trees (Callitris glaucophylla) has yielded promising results, finding many positive relationships between the management practice and the diversity of species in NSW forests.

The project, led by the NSW Department of Primary Industries (DPI) and funded by the NSW Environmental Trust, with support from Forestry Corporation of NSW, is one of the most comprehensive studies on thinning of regrowth available. 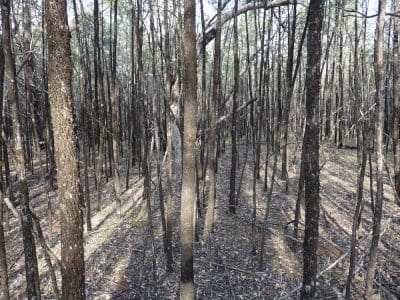 Although silvicultural thinning is a well-known technique for management of dense regrowth forests, few studies have assessed its impacts on biodiversity, especially in Australia,” Dr Law said.

Boasting more than 535,000 hectares in size, the Pilliga represents the largest inland woodland in Australia, with cypress pine being a dominant tree species in many areas. The area comprises a number of State forests and Conservation Reserves.

Research in the Pilliga considered the short and longer-term responses of vegetation structure to thinning, and this first phase has recently been published,” Dr Law said.

We also examined the responses of multiple taxa – from bats, birds and insects, to reptiles, non-volant mammals and plants – by undertaking surveys at different times since previous thinning in the forest.”

An experimental trial was established by the Forestry Corporation of NSW in association with DPI to measure the response of biodiversity to thinning at two different stages of regeneration: early thinning and second thinning. 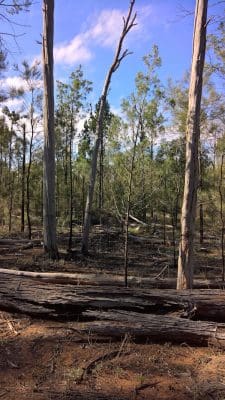 and habitat surveys were completed pre- and post-thinning, and are being compared to long undisturbed reference sites,” Dr Law said.

The extensive experiments revealed that habitat values, particularly the volume of coarse woody debris used for shelter by animals was positively associated with thinning. Flora and fauna responses were positive or neutral for each group, and when combined into a composite biodiversity index, the overall effects were positive.

Achieving sustainable forest management requires balancing production with biodiversity conservation. As such, there is now increased interest in thinning for positive ecological outcomes, including for biodiversity

Through this research, we can now conclude that thinning in cypress pine restores habitat, as it can accelerate the development of many, though not all, habitat values.”
Dr Law suggests forest managers should consider applying thinning at patch-scales rather than across broad landscapes, noting that the trial considered thinned patches of only 12 hectares in size.

Unthinned forest regrowth contributes to the mosaic of forest structure, especially as it represented habitat of similar value to thinned forest for some taxa,” he said.

This highlights the importance of managing an assortment or patchwork of forest structure that will be suitable for a diverse suite of flora and fauna.”

The study found that the main negative outcome of thinning was the loss of small dead trees, which provide hollows for insectivorous bats and reptiles in the forest.

Radio-tracking showed bats preferentially foraged in recently thinned stands, but avoided roosting there during the day. Even small dead trees can contain hollows and these are key structures to retain during thinning operations,” Dr Law said.

In addition to a number of ongoing forest science projects, DPI will continue to track biodiversity over time at the thinning trial sites to assess the response of biodiversity as habitat structure changes.