ELDERS has dismissed an unusual incident that occurred during yesterday’s Charters Towers store sale in North Queensland, where cows sold to an incredible 370c/kg liveweight, as ‘an act of poor judgement’ rather than anything sinister. 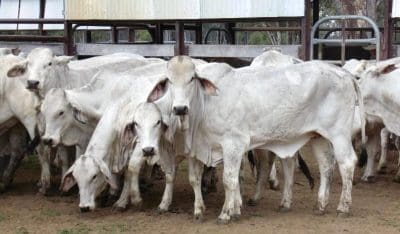 In what proved to be another red hot store sale at the northern selling centre, cows made up to a phenomenal 370.2c/kg liveweight at yesterday’s Towers sale. A live export order that was a few hundred short of requirements, due to depart the Port of Townsville in a few days, helped fuel the record-setting cow prices, Beef Central was told.

A run of about 295 cows, mostly from Charters Towers cattleman John Turley, attracted a bidding duel between JBS and a person buying on behalf of live exporter, SEALS. The cows, being sold through Queensland Rural, made between 315c and a phenomenal 370c/kg liveweight. JBS apparently bought just two of the pens, at 348c and 326c/kg.

He said some ‘dumb, spur of the moment decisions’ had been made, but admitted that for those onlookers who were not aware of the circumstances, it was ‘not a very good look.’

He said Elders itself held no current orders than included live export cows.

Beef Central was told live exporter South East Asian Livestock Services (SEALS) did have a small boat being loaded in coming days, for which it was short of some preg-tested empty females.

Elders uses a ‘rebate agent’ acting for certain Elders clients in Charters Towers, who was asked on short notice by SEALS to buy cows at the sale on SEALS’ behalf.

Thinking he was simply ‘giving SEALS a hand,’ the rebate agent started buying pens of the cows in competition with JBS, at eye-catching prices.

“The biggest mistake he made, without thinking, was instead of booking the cows down to SEALS, he wrongly signalled the buyer as Elders 200,” Mr Homann said.

“SEALS was paying for the cows, but the appearance to onlookers may have been that Elders was standing there, belting the market, for no apparent reason,” he said.

When an Elders agent also present at the sale, but in the canteen at the time the actual pens were being sold, was told about the buying, he ran over and told the rebate agent to stop, which he did immediately.

To add to the bad look, the next run of cows in the sale, being sold through another agent, dropped dramatically, to around 270c.

When asked to clarify, Mr Homann confirmed that the Elders rebate buyer was not instructed to book the cattle up to Elders 200. “He was getting nothing out of it – not one cent,” he said.

Mr Homann said all involved were advised this morning that under no circumstances should such an event happen again.

“The buyer involved is very regretful – he just had a brain fade and realised he had mucked up,” he said.

“He did the buying favour for SEALS on short notice, and did not do any homework. If he had, he would have passed the job over to an independent commission buyer, which would have fixed it and removed any conjecture.

“The action had nothing to do with corruption or deceit, it was simply a mistake. Plenty of people have paid far too much money to fill up a boat, or fill the last few feedlot pens, but we should have been more aware of how it appeared,” Mr Homann said.

“The end result was that the agent involved, Queensland Rural, booking the 295 cows to SEALS, at what represented ‘phenomenal money’ and easily a saleyards record.”