Northern development: not about getting bigger, but maximising land assets 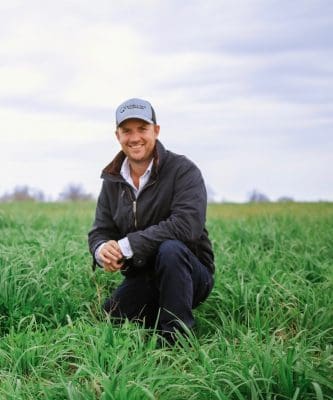 With unparalleled size and space, close proximity to a growing Asian middle class, and recent record cattle prices, ‘Developing the North’ has become an economic fixation for policy makers and industry leaders in recent times.

Northern Australia remains a land of great opportunity, but 2016 Nuffield Scholar and Queensland grazier, Adam Coffey, is recommending in his research report released today, that the industry take a closer look at historical land practices to determine their suitability and sustainability.

“The vast majority of northern grazing businesses have traditionally relied on economies of scale to remain viable, but bigger doesn’t necessarily mean better. When it comes to intensification, it’s about investing in the land you have, to improve its performance, rather than necessarily acquiring more land,” Mr Coffey said.

Mr Coffey, his wife Jacynta, and their two boys, own and manage 2500 ha near Miriam Vale, Queensland, and are redeveloping the property from its previous use as timber plantation to a beef enterprise.

Mr Coffey said that as a relatively new land owner, he’s become increasingly focused on maximising land assets in a context where the high capital cost of entry means making any significant return on investment a constant challenge.

“Having spent years in the Kimberley and Northern Territory, I’ve always been drawn back to Northern Australia and inspired by the sheer size of numbers, both in regard to cattle herd and the land itself,” Mr Coffey said.

“But as a first generation entrant into agriculture, it’s vital to ‘get it right’ in the initial years of investment. We, like so many others, recognise the need to leverage what we have in a way that ensures ongoing sustainability and the opportunity of growth.

“I’ve realised that greater productivity comes back to how we use, manage and care for our land. We’ve had to take a holistic view of the business and, because of that, are starting to see a much bigger picture than just simple performance measures.”

According to Meat & Livestock Australia (MLA), the Northern Australian cattle industry utilised around 75 per cent of total farming land in Australia in 2015-16, but accounts for less than half of the national beef herd, a global trend seen across tropical and sub-tropical growing regions.

A key part of Mr Coffey’s research has been to understand how problems have arisen from historical management and how these practices affect soil and vegetation in extensive rangeland environments.

“Graziers in Northern Australia are becoming increasingly exposed to vegetation issues such as woody encroachment and thickening, perennial pasture dieback, and increasing populations of undesirable pasture species,” he said.

“On my Nuffield program, I visited farmers faced with similar scenarios such as graziers in southern Texas, who are experiencing the rapid spread of Mesquite and Huisache in regions which have always been relatively treeless, and sought-after grazing land.

“Graziers in these areas are becoming less focused on constant mechanical or chemical intervention and more on grass production, due to a better understanding around how historical practices have often impacted soil moisture and nutrient infiltration, to the benefit of undesirable plants.”

Looking back to European settlement, Mr Coffey explored the impact of fencing and artificial water infrastructure.

“Previously, animals would have to move on as watering holes dried up, helping to protect what available feed there was from over grazing,” he said.

“The basic functions of intensity and timing of grazing, rest periods and nutrient replacement are key factors in any successful farming operation, with evidence suggesting the lack of application of these early grazing principles is contributing to woody thickening through a lack of plant diversity.

“It’s also clear that producers are left open to the risk of particular diseases affecting a single species of grass, if that is the only one they are relying on for production, which means diversification is important.”

Mr Coffey said a combination of conventional and biological tools can be utilised by beef producers to help combat some of the problems caused by historical land use, with various findings and case studies highlighted in his report, which is available to download here.