Areas shaded pink are considered to have above average bushfire potential this summer. Click on map to view in larger format

The outlook was developed from a two-day meeting of the Northern Australian Fire Managers’ Group, chaired by Bushfire and Natural Hazards CRC CEO Richard Thornton, in Broome earlier this month.

The outlook is developed ahead of the fire season each year to help fire authorities make strategic decisions about resource planning and prescribed fire management, and to reduce the negative impacts of bushfire.

Detailed fire outlooks for each region of Northern Australia are listed below the antecedent conditions and climate outlook upon which this year’s forecasts are based.

The 2013-2014 northern wet season saw neutral ENSO conditions (neither La Niña nor El Niño) in the Pacific along with generally warmer than average sea surface temperatures (SSTs) in the eastern Indian Ocean.

With the major climate drivers in a neutral phase and generally not favouring wet or dry conditions over northern Australia, shorter-term weather features contributed to the seasonal variability.

The position of the northern Australian monsoon and the movement of tropical lows delivered above average rainfall to large areas of northern Australia, except for the southern two-thirds of Queensland, which experienced an extended period of drier than normal conditions.

A typical build-up period was followed by one of the earliest monsoon onsets on record at Darwin. The last week of November saw an active monsoon trough over the Top End and included the impact of tropical cyclone Alessia. A second burst in monsoon activity began around Boxing Day and brought rainfall mostly to northern Western Australia and included severe tropical cyclone Christine, which made landfall near Karratha, WA, on 30 December 2013. While  WA received above average rainfall, Queensland had its third driest December on record.

Early January saw high temperatures and a few January temperature records set across northern Australia. In mid-January another active monsoon period began that lasted nearly five weeks and included ex-tropical cyclone Fletcher in the Gulf of Carpentaria and two other tropical lows that moved across the Northern Territory and the Kimberley region. The monsoon produced continual, and at times heavy, rainfall across the Top End, Victoria River District and the Barkly,  parts  of the Pilbara and Interior WA.

In Queensland, however, the monsoon did not move far enough south to produce significant rainfall over northern Queensland except for coastal regions around the Gulf, including Cape york. Most of interior Queensland was the driest since 2003 for January and received near average rainfall for February, which was not enough to make up for several months of dry conditions.

Following an exceptionally wet January and February, March was relatively dry  for most of northern Australia with no large- scale monsoon patterns for the month.

The wet season ended with a series of small rainfall events that continued until  the end of April, with April rainfall totals being near average for most of the tropical north. A northwest cloudband in late April brought welcome rainfall to the Kimberly, Interior WA, the Alice  Springs District and parts  of Southern Australia, with some locations setting new April rainfall records. 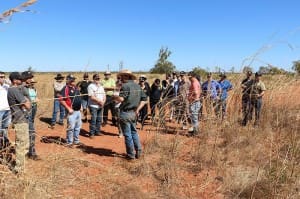 Northern Australia fire managers met for a forum in Broome earlier this month to determine the 2014-15 northern bushfire outlook report.

The tropical Pacific Ocean surface temperature has been at levels typically associated with a weak El Niño since May.

However, waters below the surface have cooled and atmospheric patterns have only recently shown some response to the warm ocean temperatures. These changes would need to persist for several weeks in order for an El Niño to become established, and it remains possible they  are simply related to shorter-term weather variability.

Most climate models surveyed by the Bureau of Meteorology along with recent observations continue to indicate El Niño is likely  (70 per cent chance) to develop later this year.

El Niño is often associated with below normal rainfall across large parts of inland eastern Australia during the second half of the year.

The recent Seasonal Climate Outlook suggests a northern Australian Rainfall pattern may have some features typical of El Niño periods.

Parts of northern Queensland are likely to experience drier than normal conditions for the remainder of the northern dry season. During an El Niño, the northern wet season and monsoon typically arrive later than normal, with northern Australia tending to have lower than usual rainfall from September through January.

Negative IOD events are typically associated with average to above average rainfall for central Australia from August to November. Warmer than normal sea surface temperatures have surrounded northern Australia for most of the dry season.

These warmer waters can provide more moisture to the atmosphere, which in favourable weather conditions (for example, interactions with fronts or northwest cloudbands) may result in increased rainfall.

The temperature outlook for Australia favours warmer than normal maximum and minimum temperatures for the remainder of the dry season across northern Australia.

Significant rain events across a large part of the Northern Territory over the past six to nine months, together with longer range forecasts from Bureau of Meteorology and an expectation of a long and hot fire season, allow for the following observations on bushfire potential in the Northern Territory.

The Darwin Coastal and Darwin IBRA regions had average rainfall totals over the wet season and this has resulted in significant growth of vegetation. In addition, the range and density of Gamba Grass continues to have an impact on this region, greatly increasing the complexity and potential risk associated with managing bushfires. The relatively late curing of the vegetation in the coastal area and limited opportunities to undertake mitigation efforts means that the assessment for the Darwin Coastal region is for Above Average bushfire potential, and an Average potential remains in the neighbouring regions.

Rainfall totals and associated vegetation growth in the far north including the Victoria Bonaparte IBRA region. Broad scale efforts at mitigating late bushfires have been partially successfully with the high fuel loads somewhat reduced. However, an above average bushfire potential is evident in this region.

On the eastern side of the Northern Territory, significant rain and good vegetation growth has resulted in well above average levels of fuel on the coastal region, including the Gulf Upper Coast. The work that local land management groups and land holders have achieved in fuel hazard abatement is helping management of this area, but above average bushfire potential is still expected for the Gulf Upper Coast region. Neighbouring areas have average bushfire potential.

Bushfire potential depends on many factors including climate and weather, fuel abundance and availability, recent fire history and available fire-fighting resources. The Kimberley and Pilbara are fire-prone landscapes and it is normal for bushfires to occur each year.

Above normal bushfire potential means that there is a high chance of fires occurring that may be complex, protracted or that could require resources beyond the local capacity.

Queensland’s bushfire season is primarily influenced by long-term and seasonal short-term climate conditions and the relationship the climate has on vegetation.

In the 2014 wet season monsoon Tropical Cyclones Dylan and Ita provided much needed rainfall over Queensland, during a neutral ENSO phase over six months.

Rainfall has generally been moderate tending average to below average across most of northern and central Queensland with the exception of Cape York Peninsula where above average rainfall occurred.

With the onset of the dry season the condition of the vegetation is declining across inland and northern inland areas, significantly increasing bushfire risk especially over landscapes with moderate to abundant grassland fuel loads.

Pasture conditions vary considerably throughout the state with sparse grass conditions in the far western border and nearby inland regions with moderate to abundant grass fuel loads over the northern, central and coastal regions. Winter frosts over inland pastures have added to the denigration of grassland conditions.

Livestock numbers are reduced over large areas due to the increasing drought conditions now covering most of inland Queensland. Landowners are now focused on protecting existing pasture growth, which has increased the risk of fire in some regions.

Forecast climate conditions indicate the potential of receiving less than 50 percent chance of median rainfall over most of Queensland. The temperature outlook for the same period indicates an increase in day time and night time temperatures.

This in combination with the drying soil profile will contribute to an increased bushfire risk. Bushfires may develop and spread quickly in grassland areas, challenging the response. Already, fire activity is noted to be freely burning during cool overnight temperatures.

In collaboration between state fire and land management agencies, Carpentaria Land Council, landowners and Bushfires NT the following areas have an “Above Normal Bushfire Potential” for the 2014/2015 bushfire season:

•          Inland Northern Tablelands – from Hopevale west of Cooktown south to follow along the western edge of the dividing range south to Innisfail, west to Bulleringa NP north to Laura and east to Hopevale.

•          Gulf Plains – north of Normanton to Julia Creek west to about Mary Kathleen, north to Gregory Downs and west to the Northern Territory Border.

A Normal Bushfire Potential is predicted for all other areas north of latitude S25º.

Regions of South East and Western Queensland south of latitude S25º will be assessed during the Southern Australia Bushfire Season workshop August 2014, with the report due to be released in September.