It’s still not too late for talented young agribusiness leaders from Australia and New Zealand to submit a nomination for the  prestigious 2018 Zanda McDonald Award.

The award is regarded as one of Australasia’s badges of honour for young leaders within primary industry, and comes with a prize package worth more than $50,000. Entries close this year on September 1. 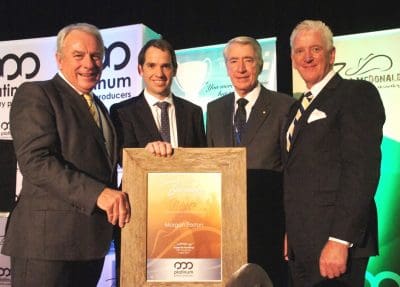 Now in its fourth year, the award is run by the Platinum Primary Producers (PPP) Group – a network of 130 of Australasia’s most influential agribusiness men and women.

It provides the winner with direct access to the wealth of knowledge that exists within the group’s membership. In addition, the winner receives an all-expenses paid overseas mentoring trip, a place on Rabobank’s Farm Manager’s or Executive Program and $1000 cash prize.

Chairman of the Platinum Primary Producers group, Shane McManaway, said the award provided a fantastic opportunity for young agricultural leaders to further their career and their personal development.

“A key attraction is the tailored mentoring package that the winner receives. The PPP members have an extraordinary amount of respect within the industry, and previous award winners have loved the fact that they can call on them for help, advice and guidance at any time.”

The 2017 winner, announced earlier this year at the annual PPP conference in Melbourne, was Morgan Easton from the Waitaki Valley, NZ. Mr Easton and his wife Hayley, who have three young children, are share-milking two properties in North Otago, milking a total of 1750 cows.

“Winning the award has been both a humbling and rewarding experience for me. The ability to tap into the expertise of PPP members has been invaluable.  I now have a great network through the PPP members that I can call on for advice when I need it,” he said.

Morgan is using the opportunity to tap into PPP members’ expertise on how best to continue growing and thriving in his family business. He will soon embark on the Australian leg of his mentoring tour, where he will visit PPP members including the McDonald beef cattle operations in North Queensland, which is run by the late Zanda McDonald’s parents and wife Julie, and encompasses about 180000 head of cattle.

The award is named after Zanda McDonald, was a prominent identity in the Australian beef and livestock industry and a foundation member of the PPP Group. He died in 2013 at the age of 41, following a tragic accident on his Queensland property. Launched in 2014 by the Platinum Primary Producers (PPP) Group, this award was born out of mate-ship and respect for one of agriculture’s natural leaders.

The award is open to passionate and determined individuals under the age of 35 years who are currently working in the agri-business sectors of either Australia or New Zealand, and who demonstrate natural leadership ability.