Next few decades can be ‘absolutely extraordinary’: Andrew Robb 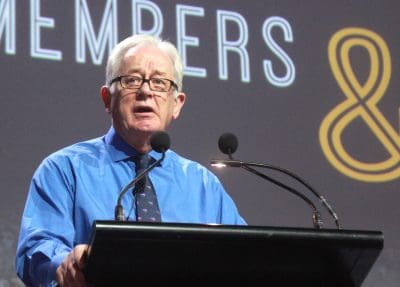 For 170 years Australia’s primary markets were 12,000 miles away in Europe and US.

Now, thanks to the “economic miracle” that has unfolded in Asia over the past 30 years, eight of our 10 biggest markets lie within our region and same time zone.

70 percent of world growth is being driven in our regional backyard, and 40pc in China alone. The Asian region will continue to drive most of the world’s growth for the next century.

Few people can offer the depth of insight into current global trade dynamics and opportunities as Andrew Robb.

The former executive director of the Cattle Council of Australia and National Farmers Federation and business consultant spent three years as Australia’s Minister for Trade and Investment to 2016.

During this time he negotiated trade agreements with South Korea, Japan and China, Singapore and the 12 Trans Pacific Partnership (TPP) nations, and conducted 85 investment roundtables with 28 countries.

“The next few decades can absolutely be extraordinary,” Mr Robb said in his keynote address to an audience of 400 cattle producers and beef industry stakeholders in Darwin.

The trends were already evident, he said.

In 2013 Australian food exports were a poor cousin to iron ore, totaling $27 billion, compared to $60 billion.

Last year iron ore exports were still worth $60b, but food exports had grown by 60 percent to $44 billion.

The opportunity was much wider than China alone.

He illustrated with these points:

Australia must invest in Asia also

Mr Robb stressed that two-way trade and investment from Australia is needed to build trade relationships in the region and, in turn, demand.

“For a long time we thought we couldn’t influence demand, but I am telling you, my observation is that we can and we must,” Mr Robb said.

“Whilst we are trading massively with the region, in many ways there is still is very little connection, we have hardly got a cent invested in these countries in the region.”

He said joint venture partnerships, where all involved had skin in the game, represented an effective way to develop relationships and mutual trust.

Mr Robb urged co-investment in the supply chain where “you share the risks and share the profits, and you build the understandings and you then cater very much to what the market wants because you will have that connection”.

What do BMWs and Aussie beef have in common?

Australia’s clean, green, healthy image provided a massive brand advantage in the region, a ‘gold standard’ that had to be protected.

Australia had to focus on premium markets to capture the higher margins needed to cover our higher cost of production.

However, this did not mean that Australian product should be restricted only to the high-end markets.

He offered BMW as an example.

“BMW created a brand as being alongside Mercedes, the car of enormous quality, it is a clean, green healthy equivalent if you like, but at a premium end of the market.

“But once having established that brand, it doesn’t matter what part of the car market you go into.

“But people think that that BMW in the $30,000 range is superior to the other models, because that is the their brand and their brand strength.

“People want to be at the premium end of every quality and every type of the beef market chain – you’ve got to think in that regard I think in my view, but we’ve also got to think more about the demand side and the relationships.”

The re-emergence of China and India and how they share global power with the US will create opportunities and challenges for Australia.

Mr Robb likened the changing dynamic to bulls in a paddock, with young and old challengers watching each other closely.

Agriculture, through its communications with politicians and its strong relationships throughout the region, had a part to play in ensuring common sense prevails.

In 2011 Australia saw prosperity turned on its head through “a crass and mis-informed political action” by a government in response to an aggressive, orchestrated social media campaign to ban live exports.

“There is a lot of tensions and misrepresentations and potential for misunderstandings and we are going to be caught as meat in the sandwich,” Mr Robb said.

“These things that are happening in the region are important to us, and your point of view to our politicians is very important throughout this process.

“We just need common sense, the more you know how the countries that are now going to be a big part of your future in terms of demand, the more you know and have got linkages and all the rest, the more that process is less likely to run off the rails.”