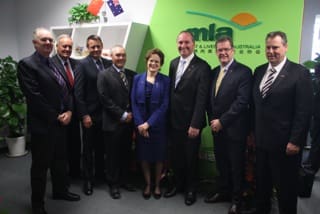 The opening of a Meat and Livestock Australia (MLA) regional office in Beijing today has emphasised the Australian red meat industry’s long-term commitment to developing the trade relationship between Australia and China, industry leaders said while touring the world’s most populated country today.

MLA Managing Director Richard Norton said the opening of the new office was a reflection of industry’s commitment to China, and a result of the recent growth in Australia’s beef, lamb and sheepmeat exports to the market.

MLA first opened an office in China in 2004 with the objective to improve market access and build demand for Australian red meat in the market. The new expanded office opened yesterday will allow MLA to have a greater ‘in-market’ presence in China.

Cattle Council President, Andrew Ogilvie, and Sheepmeat Council President, Ian McColl, are participating in Minister Barnaby Joyce’s agricultural industry delegation to China this week and were present for the official opening of the MLA office.

“There is a great opportunity to develop trading relationships with China, particularly with the increased demand for Australian beef and sheepmeat over the last eighteen months,” said Cattle Council President, Andrew Ogilvie.

“The opening of the Beijing office allows for the Australian beef and sheepmeat industries to have a greater in-market presence, as well as promoting and supporting growth in this market,” Mr Ogilvie said.

“The red meat industry has been well represented throughout the week, promoting the message that the Australian industry is a dependable trading partner that produces a high quality, clean, and reliable product,” Mr McColl said.

Minister for Agriculture, Barnaby Joyce attended the first meeting of the business-to-business Australia Sino Hundred Year Agricultural and Food Safety Partnership (ASA 100) on Chinese soil yesterday, and commended the commitment from both industries in developing mutually beneficial trade opportunities in agriculture and food.

ASA 100 is an industry initiative set up to promote Australia as a reliable and competitive food supplier to China and to permanently bolster the role of Australian agriculture and food in supplementing China’s food supply to benefit both countries.

“This is a commendable – and I think achievable – aim with considerable industry support behind it from both countries,” Mr Joyce said.

“I’m on the record as saying that Australia will never be the food bowl of Asia. We will not, and we are not aiming to, supply China with all the agricultural products needed in the future – Australia simply can’t do that.

“What we can do – and what we will continue to do – is to provide China with high quality, clean and safe agricultural and food products – many of which will be further processed in China, target the high-end of the market, or are counter seasonal.

“For example, Australia is a long-term supplier of safe and high-quality meat products, many of which are further processed in China.

“his week I visited the Tianshunyuan Muslim Food Company in Heilongjiang province in northeast China and saw Australian lamb being processed into hot pot meat products. Tianshunyuan has long been a purchaser of Australian lamb, and has recently also started to import Australian beef.

“This complementary relationship is a great example of how Australian and Chinese companies are working together to enhance the trading relationship to the benefit of both countries.

“As I have already said, we do not pretend that Australia can, or should, be the sole supplier for the extra demand in beef.

“What we can do, through the work of Meat and Livestock Australia (MLA), the Australian Government, and industry is to demonstrate how Australia is a reliable trading partner that offers products of exceptional quality.

“Through the ASA 100 meeting and the opening of the MLA’s new office in Beijing, I have been impressed by the effort industry is investing in developing relationships with China.

“I wish them all the best in their continued efforts to showcase Australia’s high quality agricultural and food products and underline our industry’s long-term commitment to the Chinese market.”