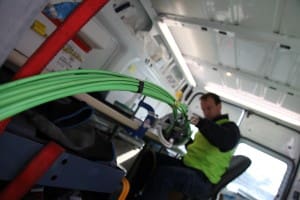 Businesses in rural and remote areas are a step closer to receiving satellite broadband internet access, with the NBN Co completing works on all 10 of its satellite ground stations.

The 10 stations will act as a backbone to help deliver NBN services to around 400,000 Australian homes and businesses via two of the biggest telecommunications satellites in the world.

The NBN Co says the technology will play a role in levelling the playing field between the city and the bush.

The Long Term Satellite Service (LTSS) will eventually connect 400,000 homes and businesses, along with 1400 schools and 200 other public buildings, representing around 3pc of the Australian population.

Many of these premises still rely on dial-up internet, and have been unable to access newer technologies such as ADSL or 4G/LTE broadband.

By contrast, the LTSS service will offer 25 Mbps download and 5 Mbps upload, making it comparable in speed to ADSL2 services, although latency is likely to be higher.

A recent Akamai report ranked existing Australian internet speeds at 44th globally, suggesting many schools, businesses and homes in remote areas are at risk of falling behind in a vastly competitive digital world.

Comparing example download times for simple web-based classroom activities undertaken using a service over the NBN vs dial-up Internet shows the extent of this gap:

“With no access to any other form of commercial broadband service, some rural and regional Australians are still using dial-up Internet – the NBN is designed to provide access to minimum download speeds which could be up to 100 times faster than what they are experiencing now.”

“Not only are those in remote areas physically removed from some essential services such as access to education and health specialists, a slow Internet connection can further disadvantage them from the benefits enjoyed by their inner-city cousins.”

“The NBN satellite service will play a critical role in helping Australians to be on a level playing field as everyone in the bush will have access to speeds that are as good as if not better than what many people in the city have today. No matter where you live, no home, school or business will be left behind.”

Federal President of the Isolated Children’s Parents’ Association, Judy Newton, said the completion of the ground stations meant kids in the bush were another step closer to having access to better learning opportunities.

“Country kids are just as intrigued with the world of technology as their urban counterparts and with all distance education schools in Australia now providing lessons over the Internet, it is vital that these children have access to fast broadband. They eagerly await the launch of the new NBN satellite services to help them overcome issues such as slow speeds and drop outs, which they struggle with on a daily basis,” she said.

To mark this milestone, NBN Co is launching the ‘Shoot for the Stars’ competition to give Aussie school kids aged 5-12 the opportunity to decorate the nose cone of the rocket which will launch the first satellite into space. In addition, the grand prize winner and their school will have the opportunity to name the satellite, etching their place in history.

“As the future beneficiaries of fast broadband, we’re encouraging children and their schools to be part of this groundbreaking initiative by asking them to help us name the first satellite and decorate its rocket’s nose cone,” Ms Dickinson said.

Source: NBN CO. For entry details and terms and conditions on the ‘Shoot for the Stars’ competition please visit www.nbnco.com.au/stars