Myths and misunderstandings about omega 3, oleic acids in beef need to be addressed

GRAINFED beef is getting a bad rap in the popular belief that grassfed beef is a healthier option based on its higher levels of omega 3 oils, says a respected US meat scientist visiting Australia for last week’s National Wagyu Conference.

Professor Stephen Smith, from the Department of Animal Science at Texas A&M University is regarded as a global export in fatty acid profiles in beef. He has studied oleic acids in beef in the US, Japan, Australia and Chian for the past 30 years. 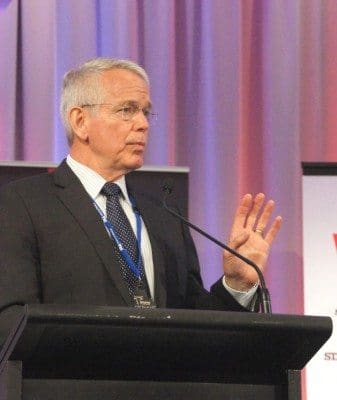 He spent much of his presentation to Wagyu conference delegates last week highlighting the exciting potential to exploit high levels of beneficial oleic acid in grainfed beef, and especially Wagyu.

While the abundance of oleic acid in grainfed beef was a positive dietary story that would benefit the industry, he also admitted, with some frustration, that much consumer attention continues to focus on the widely perceived dietary benefit in grassfed beef, because of its higher levels of omega 3 oils.

He referenced a US trial using 20-month old grain and grassfed Angus cattle.

“There’s no contesting that the omega 3 in grassfed beef is higher. But the key point is, a woman’s requirement for alpha-Linolenic acid is 1600mg per day, while a man needs 1800mg,” he said.

“I absolutely agree with the need to eat more omega 3 oils, but beef (regardless of whether it is grass or grainfed) will never be a good source of omega 3s, or omega 6s.”

“Yes, you can change the ratio of omega 6 to omega 3 in beef through grassfeeding – no question. But it has zero dietary implications.”

“But that’s why I’m so excited about the oleic acid story with beef. We can tweak the oleic acid levels to increase concentrations by grams per sample, versus just milligram quantities per sample with omega 3.”

Prof Smith said he was greatly frustrated by the amount of misinformation on social media and elsewhere about the relative value of grain and grassfed beef, led by misleading information about omega 3.

“What you are describing is the complete opposite of what’s being said: how do we reverse the message?” Mr Rogers asked Prof Smith.

“What social media is pushing out, over and over again, is the evils of grainfed beef,” Prof Smith said.

“The messages include that it’s not sustainable, when it fact it is more sustainable than grassfed beef; that it produces more greenhouse gases, when in fact it produces less; and that grainfed beef is fattier, and hence less healthy.”

“We all have to help spread the message, by getting it out there into the social media and other channels – we have to overwhelm their message with our message. It has to get out there.”

“I’m the only one doing these type of studies – that’s not enough critical mass – we need to take the science based information we currently have and push it out there, and have more people doing similar studies to press home the message.”

“But it’s a huge, frustrating problem when people simply say, ‘Grainfed beef is bad for you’,” Prof Smith said.

“The issue we are running up against – and I’m sure it is happening as much in Australia as in the US – is that we are having to defend (the health attributes) of marbled beef. There’s a small, but very vocal minority, active in many countries, that does not want cattle fed in feedlots, using perceived health issues as part of their campaign.”

Prof Smith used much of his conference presentation to highlight the ‘healthfulness’ of fatty acids found in beef, and especially so in marbled beef.

He said worldwide in the scientific community, perceptions about beef fat had changed dramatically over recent years.

“The message used to be: ‘eat beef and die’. Now, in the US and around the world, it’s ‘beef fat actually is better for you than its given credit for’.”

“The more you can increase your HDL cholesterol, the healthier you are going to be,” Prof Smith said.

So how much oleic acid is in beef?

Prof Smith presented the slide below, showing grams of oleic acid in different types of beef, based on a sample about the size of a ‘quarter pounder’ burger pattie (100g). All samples contained 24pc total fat. 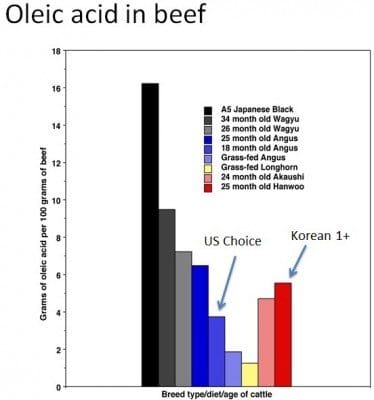 The grainfed ground beef patties used in the trial contained much more oleic acid than grassfed samples, while the grassfed patties had more saturated (bad) and trans fatty acids. Patties containing Wagyu had the most oleic acid of all – effectively trading-away trans fat and saturated fat for oleic acid.

“Some beef is just heathier than others,” he said.

The trials showed that men and women tended to respond differently to the diets, with men’s results tending to rise more than women, who already had higher baseline HDL cholesterol.

While dietary fat also increased LDL (bad) cholesterol, the rise was insignificant in terms of heightened cardio-vascular disease, when compared with other factors like hypertension, hyperglycemia, smoking, or low HDL, which represented a ‘huge risk.’

“An increase of HDL (good) cholesterol of 4mg/day in fact strongly decreases your risk of cardio-vascular disease,” Prof Smith said. The conclusion was that as the participants went through the study, they were adjusting their diets, because in eating higher fat protein, they felt less hungry.

“It shows that as we consume more fats, we consume much less carbs. I consider this to be a healthy approach. It’s a message that we, as scientists are trying to get across to those who set the dietary guidelines. Backing-off on carbs is a good thing,” he said.

Prof Smith referenced a 2012 study backed by the US National Cattleman’s Beef Association based on a consumer study using lean (low fat) beef. While the study did indeed note a decline in LDL (bad) cholesterol among test subjects, it completely ignored the fact that there was also a significant decline in HDL (good) cholesterol.

“The US Beef Board is promoting lean beef based on this study. Not only does promotion of lean beef ignore at least half of the carcase, but it also reduces the good HDL cholesterol levels. This data is taking people in the wrong direction,” he said.

Certain cuts, like brisket, contained the highest ratios of good fats of all, for reasons yet unexplained. “Briskets should be seen as a health food,” he said.

During questiontime, Prof Smith was asked about indications from Japan that NIRS devices were now being used by processors to routinely measure fatty acid profiles on carcases in the chiller.

“It’s brand new – I’ve only just heard about it,” he said. “If it works the way they say it does, it will change life as I know it – the gas chromatograph I currently use for this purpose in the laboratory is obsolete,” he said.

“If it’s true, it’s an enormous leap forward for people like Wagyu breeders who are interested in documenting fatty acid composition. But can that device distinguish between different kinds of saturated fats? Palmitic acid, for example, stays the same in all beef at about 25pc. But stearic acid can go from 4pc to 40pc. Can the Japanese device distinguish this? We need to learn more.”