THE decline in cow slaughter as the national beef herd recovers from drought has helped push Meat Standards Australia grading numbers beyond 50 percent of national adult cattle slaughter for the first time in the 2020-21 year.

Six years ago, MSA set a target of accounting for 50pc of adult cattle slaughter before the end of 2020, but fell just short – partly due to the unusually large number of (ungraded) cows making up national kills during the drought.

MSA’s 2020-21 MSA Annual Outcomes Report released today show that the milestone was reached last financial year for the first time, with 3.3 million carcases graded, representing 53pc of national slaughter. The figure was up from 46pc the year before. 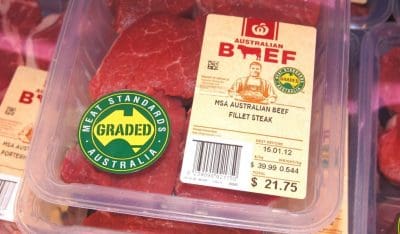 MAP-packaged beef in a Woolworths supermarket in Brisbane

As the graph published above shows, grading momentum has continued steadily for the past 20 years, from about 4pc of the national beef kill back in 2000.  Worth noting is the point that by nature of the enormous kills recorded during the drought years 2018-2020, the two previous years both recorded larger numbers of MSA gradings than the 2020-21 year just past, but both were lower in percentage terms of the overall beef kill.

The latest MSA Outcomes report showed wide state-by-state variations in the percentage of slaughter cattle being MSA graded. South Australia topped the table at 78pc, followed by Tasmania (78pc) and NSW (70pc). Mid-tier were Queensland (53pc) and Western Australia (54pc), while Victoria remains well behind all other states, accounting for just 29pc of all adult slaughter cattle being MSA-graded.

Nationally, non-grainfed cattle accounted for 41pc of all MSA cattle graded, and increase of two percentage points from the previous year.

MSA compliance rates remained steady last year for grainfed cattle at 98.1pc, while there was a 1.7pc improvement in non-grainfed to 91.7pc.

Strong producer performance was evidenced through a national average MSA index score of 57.62, a slight decrease from the record-setting 2019-20 year (58.03). Nationally, non-grainfed cattle averaged an index score of  58.69, up marginally on the year before, and grainfed steers and heifers, 56.93. The main reason for lower scores among grainfed cattle was use of HGP.

The number of MSA licensed brands also increased over the past 12 months, with the program reaching a new milestone of 205 beef and sheepmeat brands licensed under MSA. The use of the Eating Quality Graded cipher has also grown, with businesses that represent 53pc of MSA volume using the cipher to describe beef by eating quality outcome.

“The report highlights the record-breaking participation across the supply chain of Australia’s world leading eating quality grading program over the past 12 months,” Dr Packer said.

For MSA beef producers, this had resulted in an estimated $157 million in additional farmgate returns in 2020-21, reinforcing the value that the MSA program delivered to industry.

In an important breakthrough for the sheepmeat industry, the first cuts-based sheepmeat model was developed in 2020-21, based on more than a decade of research.

MLA is now working closely with industry towards commercialisation, which includes benchmarking and testing the system with a number of processors, and is partly dependent on technology to capture intramuscular fat content in sheepmeat.

“Once this model is commercialised, processors and brands will be able to apply sophisticated eating quality segregation within their supply chains to underpin branding, and offer incentives to encourage improved supplier performance,” Dr Packer said.

In 2020-21, an estimated 57pc of the total lambs processed in Australia were processed through MSA-licenced processing plants that follow processes to improve eating quality.

Dr Packer also recognised that producer engagement programs and the enhanced myMSA platform continued to drive increased on-farm performance. Despite restrictions due to COVID, more than 700 producers and 300 livestock advisors were engaged in MSA education during 2020-21, while 3445 producers used the myMSA feedback system 22,407 times – an increase of 38pc on the previous year.

Meat Standards Australia is the world’s leading eating quality grading program for beef and sheepmeat, developed to improve the eating quality consistency of red meat. The system is based on more than 1.2 million consumer taste tests by more than 171,000 consumers from 11 countries and takes into account the factors that affect eating quality from the paddock to plate.

Beginning in 1998, MSA has integrated more than 20 years of research and development with commercial outcomes, and involves participation along the entire Australian red meat supply chain.