Leading Darling Downs grainfed beef producer Mort & Co last night celebrated its relocation into an expansive new modern headquarters in Toowoomba, a move that positions the business for further expansion while maintaining a deft nod to its rich heritage in both the region and the Australian beef industry.

The Mort & Co name was first established in 1843 by Thomas Sutcliffe Mort, widely regarded as a pioneer of meat refrigeration and the export of frozen beef from Australia. In the 1850s the prominent auctioneer, wool broker, pastoralist and industrialist owned a large number of housing allotments close to the Toowoomba railway station, an area today known as Mort Estate and bordered by Mort Street.

In a poignant connection with the past, the new headquarters of the modern day Mort & Co business established and developed by Thomas’ great, great, great nephew Charlie Mort, is located in the Mort Estate on the corner of Mort Street and Bridge Street. While Mr Mort’s family connection provided a nice fit for the new Mort & Co headquaters, it was the size of the property,  its accessible location and opportunity for expansion that were the main reasons for the decision to purchase the hotel and refurbish it into offices. 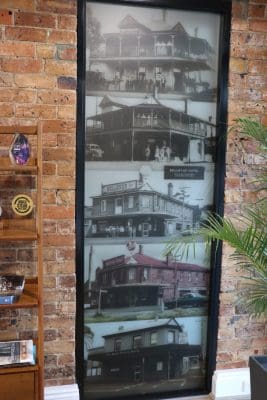 The Bellevue Hotel building throughout the years.

Now with a staff of 150, the business outgrew its Herries Street offices in Toowoomba, and in the past 12 months purchased the original circa 1904 Bellevue Hotel (and later named the Mort Estate Hotel) which it has now transformed with a multi-million dollar refurbishment into an impressive modern showcase for the home-grown global beef exporting business.

Toowoomba based FKG Group was engaged by Mort & Co to convert the building into a modern office space, while incorporating its heritage features including original pressed metal ceilings and brick feature walls and its traditional structure and exterior.

The functional interior refit includes a new stylish reception, contemporary kitchen facilities, on-site parking for up to 43 employees, two board rooms, staff common rooms, and the piece de resistance – a bar and grill, which features a Teppanyaki grill for showcasing Mort & Co’s award-winning Phoenix Beef to clients and a beer tap recognising the building’s 100 year history as a pub.

Mort & Co managing director Charlie Mort said the move signified the growth of the business and marked its willingness to remain Toowoomba based.

“We employ mainly Toowoomba and Darling Downs locals and with our recent expansions as a result of both domestic, but particularly foreign demand, our team continues to grow, as did our need for a larger office space,” he said.

“We want to continue taking Australian, but in particular, South East Queensland beef to the world.”

The Mort & Co team moved into their new office space in early 2019, officially celebrating the opening of the building with friends, family and stakeholders at a function in the new office last night.