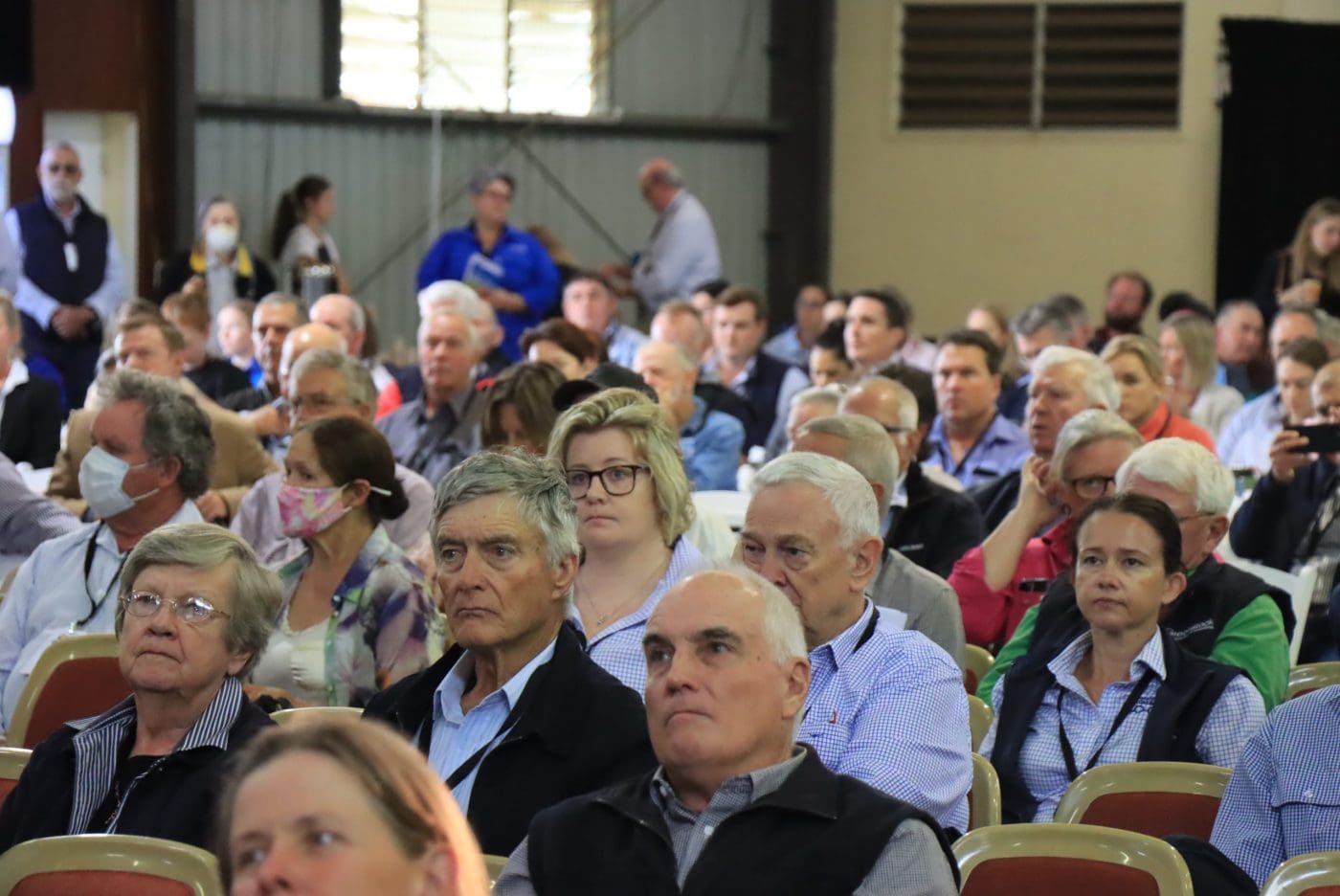 Part of the 700 strong crowd attending the MLA updates in Toowoomba today.

A showcase of red meat research and industry communication efforts is underway at a Meat & Livestock Australia update forum in Toowoomba today, with more than 700 producers registering to attend the event.

It is the first end-of-year producer forum held by MLA since the levy-funded industry service provider held an AGM and industry forum at Tamworth in 2019, before the COVID pandemic disrupted large-scale industry gatherings. 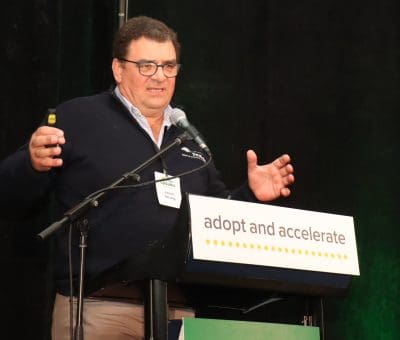 That was reflected in the format of today’s program with a significant portion of the format moving off the main stage to provide multiple smaller demonstrations of a range of technologies being adopted across the red meat sector.

In his opening address this morning Mr Strong touched on a range of issues including the industry’s commitment to achieve Carbon Neutrality.

Five years ago at a similar MLA end-of-year event in Alice Springs, then MLA managing director Richard Norton announced the industry would commit to achieving that target by 2030.

Speaking this morning Mr Strong said that commitment had been based on a CSIRO report which showed that with the right focus on research and development and the right policy environment, there was a path for the red meat sector to be Carbon Neutral by 2030.

“Because we have been on this journey longer than other industries, we’re able to be proactive in terms of the things we look at to reduce our emissions and impact on the environment,” he said.

The same strategies also enhanced productivity, which meant the industry could maintain sustainability while continuing to make profit.

“We should be recognised as the gold standard as an industry that is able to be more profitable and productive while also managing its impact on the environment,” he said.

“We are the only industry that has made progress in the last 20 years so it is incredibly important we are proud of that and communicate that.” 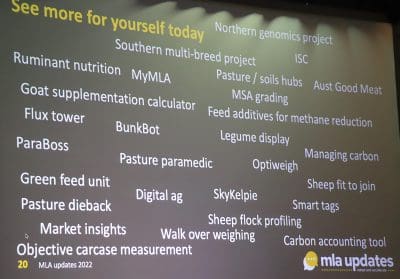 A list of research and technology areas being showcased at today’s MLA Updates in Toowoomba today.

Touching on the big 2022 issue of biosecurity, Mr Strong said the arrival of Lumpy Skin Disease and Foot and Mouth Disease in Indonesia had resulted in the greatest collaboration across the red meat supply chain he seen in his time in the industry.

“The willingness of all of the supply chain components to work together to ensure we are responding to the things that are important and are as prepared as we can be is also something we should be proud of,” he said.

“Our biosecurity systems are very good, they do work and they are keeping us safe,” he said.

Perceived risk ratings by the Federal Department of Agriculture place the chance of an outbreak of LSD or FMD in Australia at 28pc and 12pc respectively in the next five years.

But viewed the other way, that also suggested there is a 72 percent likelihood Australia will not get LSD, and 88 percent chance will not see an outbreak of FMD, he said.

“We are very focused on keeping it out and very well prepared if we have to respond,” he said.

At today’s event MLA has also launched a new free pasture biomass mapping service that gives every producer across Australia with a Livestock Production Assurance account free access to regularly update satellite maps of ground cover across their land holdings.

While satellite technology has been available for some time, the ability to provide every producer with a base level of information on their biomass that will allow them to make regular assessments of feed availability is what has been missing.

“The potential is really quite significant in providing producers with that base level of information the opportunity to look at what their current biomass is, and how that may fit in with their grazing pressure and other things going forward.”

MLA has also announced the launch of a new NVD app today, which will help to streamline movement management systems.

This morning’s panel session also included a significant focus on MLA insights into consumer demand trends, and outlined work MLA is doing to communicate on behalf of the red meat industry to the broader community.

‘We’re part of the conversation now’

MLA communications manager Lucy Broad provided an overview of MLA’s work to develop a  range of evidenced-based messages that are simple to understand and easily shareable in formats and on platforms most popular with target consumers.

This included the development of producer videos, some of which recently featured at the COP 27 climate forum in Egypt, and animations like the one below, which aim to provide clear, easy to understand explanations of complex science such as the biogenic cycle in which livestock emissions function and which makes them different from fossil fuel emissions in their impact on the environment,

Ms Broad said the industry’s communications with the broader community must be focused on clear insights showing what is important to consumers.

MLA carries out extensive community research to help understand these issues every year, she said.

Among the most recent findings is that 30 percent of people are eating red meat less often, a figure that has not changed significantly over the past 10 years.

The more consumers learn about the industry, the higher their trust

But it was not all “doom and gloom” – overall the research shows 60 percent of people feel very positive about the production of red meat in Australia.

About 30pc think they “know a little bit” about the industry, but about 50pc are eager to learn more about what the industry does and how it operates.

One of the more powerful findings from the research is that when consumers do learn the facts about how the industry operates, their perceptions of the industry become much more positive.

“They perceive us to be ethical and trustworthy and that we really do care about the environment,” Ms Broad said.

And as more consumers learn more about how the industry operates in reality, the more red meat they consume.

Producers in particular are seen by many people as credible, respected sources. Videos featuring what they do on properties have hence formed a key part of industry communication efforts, along with animations that turn complex science into simple messages for broader audiences.

Working with influencers to demonstrate the value of red meat in healthy diets has also proven to be an effective strategy in MLA’s communication works, helping to reach more than give people in a target audience of potential meat reducers in recent years, and being part of a conversation where “we just weren’t there before”.

“We’re starting to be a part of those conversations now,” Ms Broad said.