FOR the first time in three years, Australian cattle prices are now lower than year-ago levels, and production is higher, resulting in downward pressure on the market that is expected to continue throughout 2017.

This is one of a number of revisions to 2017 projections included in Meat & Livestock Australia’s mid-year cattle industry update issued yesterday. The adjustments come as a result of factors including a poor July-to-September rainfall outlook for southern Australia following the dry autumn, 20-year low female slaughter and volatile global market activity. 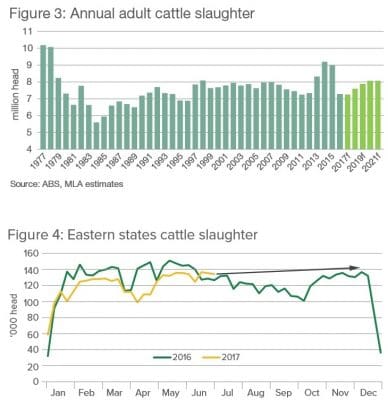 “These trends are likely to remain in place for the remainder of 2017 and have a significant impact on price and production expectations,” Mr Thomas said.

“It has been a good run for cattle prices – for three years, producers selling at the same time each year have received more for their cattle than the year before. That’s now changed, though we’ll remain well above that five-year average for the foreseeable future.”

Despite a softening in the cattle market, Mr Thomas said Australian cattle prices are unlikely to drop back to pre-2013 levels, given continuing restocker activity as pasture conditions improve, an Australian dollar that is unlikely to strengthen and reducing tariff regimes into Japan, Korea and China.

Mr Thomas said record low female cattle slaughter as a result of the ongoing national herd re-build had impacted many parts of the industry.

The adult cattle kill was 13pc below 2016 levels at 2.16 million head after the first four months of the year, also the lowest since 1995. However, numbers processed across the eastern states recovered in June and are anticipated to remain above year-ago levels for the rest of 2017.

The result is a small revision to the annual total, to be steady with 2016 at 7.25 million head, compared to April estimates of 7.1 million head. Momentum is expected to continue through to 2018, when 7.6 million head are anticipated to be processed.

A significant consequence of the low female cattle slaughter, combined with record high numbers of cattle on feed is that average carcase weights for the year-to-date were 296.3kg/head – a staggering 7.8kg (3pc) increase on the previous record set during the bumper season year of 2012.

“As a result of the increase in cattle slaughter, combined with heavier carcase weights, 2017 beef and veal production is now estimated to be 2.17 million tonnes carcase weight, up 2pc year-on-year,” Mr Thomas said.

Despite significant shifts in global beef markets, the forecast 2pc year-on-year rise in Australian beef production for 2017 should see exports match the 1.02 million tonnes shipped in 2016. This would result in the fifth consecutive year above one million tonnes exported.