MLA fires starter’s gun on carcase measurement, but is industry in the blocks?

Today’s revelations that MLA plans to borrow $150 million to install dual x-ray carcase measurement machines in up to 90 Australian abattoirs appears to have caught many in the industry by surprise.

Peak industry councils are invariably supportive of the reasons for introducing objective carcase measurement, but are still yet to agree on how it should be implemented in discussions being coordinated by the Red Meat Advisory Council.

Key issues yet to be ironed out include which technology to use, how to ensure data is standardised from abattoir to abattoir, and, perhaps most importantly, how it will be funded and who is going to pay for it.

MLA managing director Richard Norton clearly wants to see action in this space and is wasting no time in laying down the gauntlet with his ambitious announcement today. He pitched the project as the next ‘long-term vision’ for the Australian red meat industry.

To put the ambitious project in some context, he confirmed that it ranked ‘alongside MSA’ in terms of investment size for the producer-owned service delivery company.

How does MLA intend to fund it?

Mr Norton said MLA had spoken to the minister, who supported the producer company in seeking ways to raise the necessary capital – be that through the cattle transaction levy, through whole of industry contribution, or a commercial loan.

“We will continue to sit down with industry to work out how we fund this project,” he said.

Mr Norton suggested that CCA and SCA would like to own the DEXA units installed in abattoirs, have them calibrated by AusMeat, and treat the data that comes out of the units as ‘industry data.’

“It would mean that the performance of an individual producer’s livestock consigned to a specific processor would remain commercial in confidence, but it could be that socialised data, such as the average carcase yield for yearling steers in southern Queensland, becomes available for broader industry access,” he said.

Has MLA jumped the gun?

Is this the push the industry needs to unleash the benefits of objective carcase measurement once and for all, or is he jumping the gun before industry leaders have the chance to properly choose the right path forward?

The peak industry council representing meat processors told Beef Central this morning that the sector was very supportive of objective carcase measurement, but must be first consulted on the details of MLA’s plan before it could decided whether it warrants support. 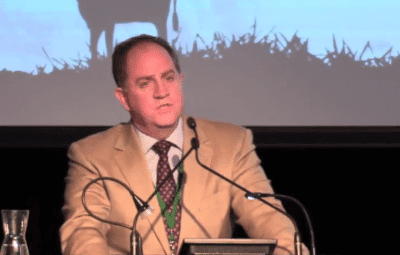 “It’s important to note that OCM is jointly funded initiative of the AMPC and MLA, and as yet the processing group needs to be consulted on the details of roll out.

“All of industry is behind this initiative, however it’s critical we take a cohesive and consultative approach to its introduction to make sure all supply chain participants benefit.

Teys Australia corporate affairs spokesman Tom Maguire confirmed that his company’s Lakes Creek plant at Rockhampton was the site of a Processor Initiated Project designed to install and develop a full-scale commercial DEXA system for beef processing. That project is expected to start in February next year.