THE impact of African Swine Fever on global meat trade, the MLA board election process, dung beetle research funding and the wisdom of engaging with environmental and animal welfare activists were among the broad suite of topics occupying the minds of red meat industry stakeholders during questiontime at Wednesday’s MLA annual general meeting in Tamworth.

As often happens during times of high cattle and sheep prices, stakeholders were largely content about MLA’s performance as the industry’s service delivery company, if the nature of questions was any measure.

Past history at AGMs held since 1997 has shown that levels of dissatisfaction among levy payers rise significantly when cattle and sheep prices are poor. But as illustrated by several speakers at this week’s Red Meat 2019 industry showcase, a unique feature of the current continental-scale drought is just how well livestock prices have performed, in the face of drought-fuelled stock turnoff.

Here’s a sample of general questions raised with the MLA board, from the floor: 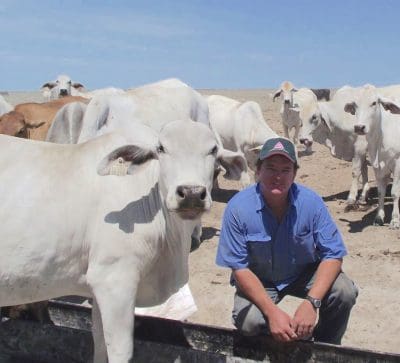 Pilbara, WA beef producer David Stoate questioned the need for MLA members to vote to approve directors at all. “Why did we have a vote for board places today? We’re given three candidates for three available positions. It seems to be a waste of money, and it annoys me,” he said. “If there were 133 candidates this year, why not select a half dozen of the most suitable, and let the producers have their voice?” he asked.

“The process that we have gone through today is outlined in our constitution,” chair Michele Allan said. “Any departure would require a constitutional change. Any change to the selection process would have to go through an AGM as a special resolution to change the constitution of the company,” she said.

Asked whether she thought such a constitutional change was warranted, Ms Allan said she had no comment. “I sit on boards of ASX listed companies, and this is the normal process,” she said.

“It doesn’t give producers much credit, that’s all,” was Mr Stoate’s parting remark.

WA beef and sheepmeat producer David Lovelock asked whether the MLA board would commit to financial support for the peak council consultative committee structure via appropriate service level agreements, and work with the peak industry councils to extend and improve advocacy skills and communication channels. 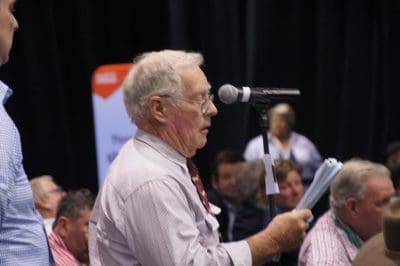 “We appreciate the input that those consultative committees make, and that’s why we have had a project with CCA to fund those committees on the basis of their contribution to the consultative process,” Jason Strong said.

Pressed on whether MLA would extend the agreements, Mr Strong said the conversation had already been held with CCA over renewal of the agreements, which expired in September.

“It was decided that the agreement would be for 12 months rather than the previous longer period, because of the discussions as part of the Red Meat 2030 process, where RMAC was exploring other options for consultation and oversight for the Red Meat 2030 plan and its implementation, including the potential implementation of task forces – which in some ways would cut across what is currently being delivered by current consultative committees,” Mr Strong said.

“On the basis of the need for ongoing consultation, and appreciating the value contributed by those CCA committees, we’ve offered to support the committees for an additional 12 months. This would take us out past the timeframe for implementation of the 2030 plan – even though, by that stage, there may be a taskforce in place,” he said.

NSW producer John (JR) Richard renewed his campaign to see more attention focused on R&D that would lead to a broader range of beneficial dung beetles introduced to Australia for fly control.

He said he had self-funded a trip to Indonesia with the express aim of understanding why buffalo fly was not the problem there that it is in northern Australia, and whether local dung beetle species were responsible. He said several excellent candidates were identified, and again urged MLA to focus more attention on seeking new species for introduction to Australia for fly control.

“All future R&D projects will require a set of insights behind them, with a connection to adoption and commercialisation,” Mr Strong said. “That will provide more structure around our approach to R&D, which will capture things like the dung beetle project that we already have in place ourselves. This will provide an opportunity to connect with and/or parallel our work, with yours, so we can potentially both get some mutual benefit,” he said.

NSW sheepmeat producer Ian McColl asked about African Swine Fever’s impact not only on markets around the world, but production systems, and whether MLA had established a risk profile on how it might impact our own red meat industry. 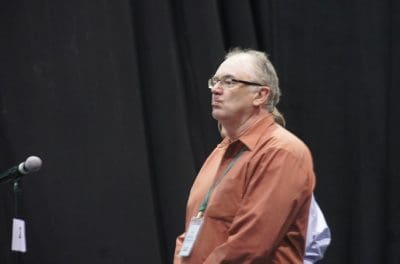 “The potential for exotic disease incursion is very high on our risk register, and ASF has triggered interest in that issue,” Mr Strong said.

“It’s being discussed at both board and operational level, about how we engage with different projects that cut across the areas that would impact on that, such as LPA, for example.

Mr Strong said a biosecurity roundtable was held in Canberra two months ago that included all jurisdictions, industry organisations, the Australian chief vet and ag minister.

“There’s a very structured plan and approach around how that risk is managed at the moment. In an unusual circumstance among about 50 people at the meeting, the most organised, instructive, prepared, engaged group in the room were the five government representatives. It gave us quite a lot of comfort in the approach they are taking.”

In terms of opportunity for Australian red meat, Mr Strong said the latest projection he had seen suggested that in China, a 28 million tonne reduction would be seen in pork production this year as a result of ASF.

“To put that into context, the global export beef trade is around ten million tonnes a year, and pork about the same. So the deficit in China is more than the total world trade in beef and pork combined. There is going to be a massive disruption in protein supply and demand, as a result of this over the next two years.”

NT cattle producer Markus Rathsman said Jason Strong’s support for the live export industry (expressed most recently during the recent Livex conference in Townsville), had been ‘encouraging’ to northern cattle producers, asking where he saw the priorities over the next few years.

“Reading the MLA risk-register, live exports issues were listed numbers one and two,” Mr Strong said. “The more I started to understand, in depth about the industry, the clearer its importance became to us from a market point of view. It’s a $1.8 billion market last year, which puts it number four on the industry’s export markets. It’s worth more than our beef exports to Korea, and our relationship on a supply chain basis with live export has been nothing short of dysfunctional, so we have to do that much better.

“From a service delivery company’s perspective, it is not our perogative to have a position on whether we should or should not engage in live export. Our responsibility is to support levy payers, and producers in the north and the west supply into the live export trade. We want to be more supportive of those levy payers, and build better relationships with Livecorp and ALEC, which we’ve been working on.”

A Central Queensland levy payer raised the prospect of an industry focussed, independent adjudication system for disputes over results from meatworks carcase grading.

“Currently there is no industry specific process for when there is a misunderstanding, or when something goes wrong in grading. We need an independent industry expert to adjudicate that process between producer and processor, and have a swiftly enforceable outcome,” he said.

He said he had raised it with the board last year, but had heard nothing back.

Ms Allan said the board committed to look into the matter, and come back to him in writing.

Australian Beef Association’s Brad Bellinger asked questions relating to the issue of sustainability, raising concerns over a meeting on the topic he understood MLA had had with the World Wildlife Fund in June or July this year. 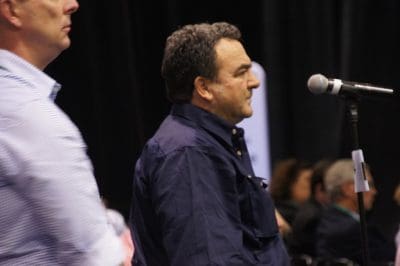 “The WWF of course, wants to get rid of us as cattle producers – it’s on their agenda,” he said.

Mr Strong said regardless of some peoples’ views, one of the obligations MLA had was to understand exactly where groups like WWF were coming from. “We can talk with somebody without supporting what they stand for, and understanding where they are coming from and why can be useful for us,” he said.

Mr Bellinger also asked whether there were plans to attach environmental modules to the LPA program.

“It’s certainly been discussed – particularly in the context of the sustainability framework, and what might emerge as a path forward from that – but there is no immediate plan,” Mr Strong said.

“But sustainability is certainly a very topical issue, and there is a lot of consumer and community interest in this area. We have to be aware of it and engage, but we also have to make sure that anything we do in this areas is driven by profitability of our levy players, and making sure that we have inter-generationally sustainable businesses, while also considering we’re leaving the environment in better shape than were we were before.”