AN Indigenous-owned cattle station in the east Kimberley has struck a lease deal with high profile Sydney media buyer, Harold Mitchell’s large northern grazing business which will provide capital for the Indigenous owners to make substantial improvements to their business and enhance prospects for the local community.

The Ngunjiwirri Aboriginal Corporation, which owns and runs 360,000 hectare Lamboo Station near Halls Creek in northern WA , will lease out a substantial portion of its property under a five-year deal with Yougawalla Services, owned by Mr Mitchell and partners. The new sub-lease arrangement will offer increased lease income for NAC and pave the way for further infrastructure improvements on the property which will contribute towards a long term, sustainable beef producing future for the Indigenous owners and Lamboo Station.

It is the latest in a series of steps which have seen the property transform since the early 2000s from a struggling lease with limited infrastructure and poor quality cattle.

Robin Yeeda has been station manager at the property for the past 10 years, provided with strong support and direction from NAC directors.

Mr Yeeda said more than two thirds of the station was sub-leased, which allowed NAC to earn an income and make substantial improvements to infrastructure on the property, including the installation of modern well-equipped cattle yards.

The remaining third of the property run by NAC runs Brahman cross cattle, where the indigenous owners have been working to consistently improve herd genetics and management. Cattle turnoff goes into the live export market, either through Broome, Wyndham or Darwin.

The sub-lease is due to commence in July, subject to WA Pastoral Lands Board approval.

Mr Yeeda said the sub-lease would provide security for both the property and the Ngunjiwirri community of about 40 people.

The collaboration has improved the NAC’s business capacity via training in corporate governance and management, skills development, biosecurity procedures and the provision of business advice.

ILS manager Mark Chmielewski said Lamboo station was at the forefront of Indigenous pastoral businesses in the region.

“The NAC has used its rapidly developing business skills to take advantage of the improved beef market and subsequent increase in land values in the region to secure its long term future with this deal,” he said.

“The Corporation has been diligent while Robin has demonstrated strong station management. This commitment, hard work and strength is transforming Lamboo into a viable, robust business.”

Mr Chmielewski said the NAC’s success could be a model for other Indigenous rural businesses in Western Australia to learn from and to help achieve their goals.

“The ILS is taking a long-term approach to building the capacity of Indigenous agricultural businesses to point where the people manage their own business affairs sustainably,” he said. 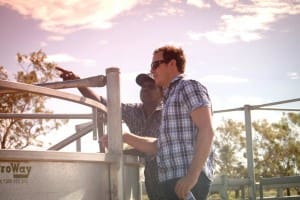 “We have recently seen a significant increase in the number of improved commercial investment arrangements with Indigenous beef producers and we expect that growth to continue.”

Prominent media buyer Harold Mitchell and his partners in Yougawalla Services, Haydn Sale and Doug Flynn, operate neighbouring Margaret River, Yougawalla and and Bulka Station, plus other lease, sub-lease and agistment agreements with other indigenous-owned properties in northern WA.

“We are next door at Margaret River station so it made sense,” Mr Sale said. “It also appealed to us to do some development as part of the deal so the productivity of the country is being improved.

“We are hopefully going to be able to work in with Robin Yeeda and his team to assist with cattle work, including mustering,” he said.

The lease deal with Yougawalla Services is for five years, and fits well with Ngunjiwirri Aboriginal Corporation’s development plans. The agreement is a part cash, part infrastructure development deal, meaning at the end of the lease term, the under-developed parcel of lease land will be much better improved than it is today.

“We think it will make Ngunjiwirri Aboriginal Corporation quite a viable entity over time, Mr Chmielewski said.