FORMER mining sector leader Mitch Hooke offered a simple one-word answer in response to a question at an Australian Farm Institute forum yesterday about what was the most effective advocacy method he had been a part of. 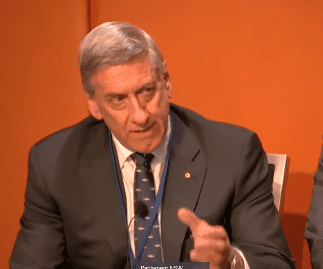 “Communication is not what it is about,” he told the AFI conference exploring agricultural advocacy issues and challenges.

“Engagement is what it is about.”

Mitch Hooke may be best known for his leadership roles in Australia’s mining sector, but his roots are firmly in the agricultural sector.

The son of a Victorian western district grazing family, he studied rural science at UNE Armidale before helping to pioneer the introduction of zero till farming on Queensland’s Darling Downs.

Then followed leadership roles in Canberra including CEO of the Grains, Food and Grocery councils consecutively, before he became CEO of the Minerals Council of Australia from 2002 until his retirement from the position in 2013.

He remains connected with agriculture and continues to serve as Non-Executive Director of Grains Producers of Australia.

In a panel session posing the question “What does effective advocacy look like?”, Mr Hooke said that while evidence and facts were important to build integrity and credibility, engagement and empathy was critical.

The biggest advocacy mistake, he said, was getting “lost in the logic of our own arguments” and “actually thinking that your stuff doesn’t stink”.

“You need to establish the awareness and interest, not facts.

“Facts are rarely ever an effective advancement.

“You need to connect. Empathy builds equity. And when you get equity you get a bridge. And once you have got a bridge you’ve got a pathway to working with people.

Engagement meant “understanding their culture as much as you want them to understand yours”. 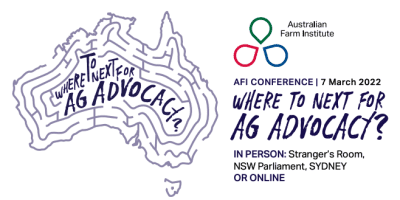 However, during his time as MCA CEO, it moved to the sustainable development equation of “engage, listen, learn”.

One major area of reform was in indigenous relations, he said, when the mining sector stopped “worrying about native title” and started working inclusively with local communities.

He said the industry surprised everyone when it actively opposed a proposal by the Western Australian Liberal Party to move a motion seeking to extinguish native title and reverse the High Court Decisons on Mabo and Wik.

“I said over our dead body,” he said.

“If you want to know about trust and confidence, that went viral.

“And we were able to establish a tremendous working relationship with indigenous Australians.

“We went through land use negotiation agreements, not one of which contested native title.

“When I retired in 2013, we had 600, not one of which contested native title, and they weren’t just sit down money, they were about being part of the equation.”

ESG must include ‘economic’

He said sustainable development had to include the economic side of the equation, but ESG had become focused only on environmental, social and governance.

“Well you need to get the economic back in there, because you can’t be in the pink or the green if you’re not in the black.

“Remember that. If it is not a market sustainable platform, that is where you want to be going.”
In relation to the question of which part of engagement was more important – evidence or empathy – Mr Hooke said ultimately “you have got to have both”.

“You will be looking under your arm pits if you don’t have a defensive due diligence and the sound science, you have got to have a very substantive and factually sound case,” he said.

“You need to understand your facts are there as a defensive due diligence, and they are the legitimacy that go to the integrity and credibility of what you are about, and you test the arguments of your opposition.”

One of the biggest advocacy mistakes, he said, was “industry advertising”. 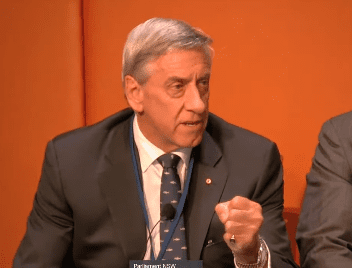 He added that it was imperative industry representatives present Government ministers with solutions, not just problems, and that they present a single view.

“There is no point going up to the hill without a solution,” he said.

“And don’t go up there being a sector split.

“If you haven’t got your sector coordinated and your position sorted out, don’t expect politicians to do it for you because they won’t, they don’t have the courage to do that, nor do they have the wisdom.

“So never go to a minister without a minister knowing what they’re going to get. Make sure you have done your homework and your groundwork.

“Ministers will never give what ministers don’t know they’re giving, so don’t expect they are going to give you a solution or an answer if you haven’t done your groundwork with their minders and their departments and what have you.”

“If you go in there like a zealot you will get nowhere.”

Circling back to his original point, Mr Hooke said the key point to focus on was engagement.

“You want an information pull, not a communication push.

“The moment somebody walks into your office and says they have got a communication strategy for you, show them the door.

“If they come in and say I have got an engagement idea for you, sit them down.

“If you have to go out with an information push I can tell you, your stuff is going to end up beside the toilet seat with all the other bloody advertising of fertiliser and chemical which you’re going to read while you’re doing whatever you do.”