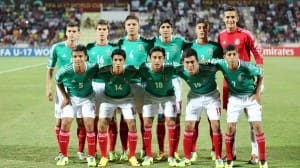 Mexico’s World Cup team has sworn off beef in the lead up to next month’s tournament, citing residue fears.

Reuters reported that five players were withdrawn from Mexico’s CONCACAF Gold Cup squad in the United States in 2011 after testing positive for clenbuterol, a banned stimulant sometimes illicitly mixed into livestock feed in Mexico to make beef leaner.

The five were later absolved after the Mexican Football Federation and world soccer governing body FIFA considered the presence of clenbuterol in Mexican cattle a public health problem.
“Given what happened, we have decided we will not eat red meat,” coach Herrera told a news conference.

‘We’ve been telling the players for the last month and a half not to eat beef and they’ve paid heed.’

“Here there’s very good cooking, we have a spectacular chef and eat all kinds of meat, except beef. We’ve also been telling the players for the last month and a half not to eat beef and they’ve paid heed.”

“Miguel Ponce, who joined the squad on Tuesday as a late replacement for injured fellow midfielder Juan Carlos Medina, ate some tacos without knowing he would be added to the squad. Beef goes through your system in three to four days, though we’re still taking preventive measures,” coach Herrera said.

Mexico, who face hosts Brazil, Cameroon and Croatia in Group A at the tournament, starting on June 12, are in their third week of preparations. It was not disclosed whether the team would be allowed to eat beef after arriving in Brazil from Mexico next week.