ONE of the key words McDonald’s associates with its mission to engage more close with customers in redefining ‘quality’ is sustainability. 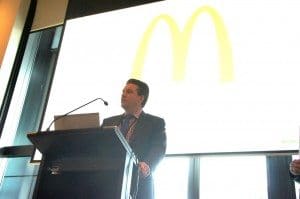 Last year, McDonald’s made a commitment to buy a portion of its worldwide beef requirements from verifiable sustainable sources in 2016.

“We don’t yet know the volume, or the area of the world from which it will come, but we have made that promise to our customers and shareholders,” Mr Brazier said.

McDonald’s is now involved with pilot programs and demonstration farms in Victoria, as well as a number of locations overseas including Canada, Ireland, the US and Brazil.

“We’re looking to find out from those local industries how we can tell those stories better and to help facilitate information sharing, ideas and best practices. You, as beef producers, are already doing good things –It case of building on these foundations and communicating with our consumers Mr Brazier said.

“It’s going to take all of us working together to make progress towards achieving these goals.”

He said in Australia, there were already good programs in place, like MLA’s Target 100 project, to understand what’s important for the sustainability of the Australian industry.

“These are the types of stories that we want to be able to help tell. Activities like this align with our own objectives, so if you are not already part of such programs, I’d encourage producers to join. The transparency that consumers are now demanding can best be responded to from proactive, rather than reactive approaches.”

Your story is a compelling one – but we need you to keep helping us tell your story.

“Your story is a compelling one – but we need you to keep helping us tell your story.”

Mr Brazier described sustainability as a ‘vague, generic word.’ “You could ask a hundred people for a definition and get just as many answers,” he said. “Some might focus on the environment, others on the concept of simplicity, or what constitutes ‘real food’.”

But a customer was not necessarily going to walk into a McDonald’s restaurant and ask for a ‘sustainable’ burger, he said.

Increasingly their perception of ‘quality’ involved a product being sourced right, from a supply chain that is transparent, where the beef has come from a farm that has not had a negative impact on the environment, and where the animals have been treated ethically.

Mr Brazier said extensive research into consumer trust suggested that while consumers might not hold high levels of trust in corporate multi-nationals (like McDonald’s), they did in fact hold considerable trust in farmers.

Research showed that the consumer’s expectations about what comprised ‘quality’ in food, include evidence that the product was sourced in ways that protected the environment, and which respected and protected people and animals

“It’s about things like high standards in animal health and welfare; no additives or preservatives; sourced from local farms with no pesticides or residues; no artificial colours or flavourings.”

While beef typically changes hands a number of times from the farm gate to its final destination at McDonald’s, consumers were expecting accountability from McDonald’s, in terms of how animals are treated on-farm, Mr Brazier said.

“But that’s a good thing, because we have that platform (large customer base and big marketing budget) in place to be able to tell that story,” he said.

We want to be able to continue to tell the good stories that you guys are doing on-farm here, and be able to get them out to the consumer

“We want to be able to continue to tell the good stories that you guys are doing on-farm here, and be able to get them out to the consumer.”

“In order to combat that negative trust that consumers tend to hold against large corporates, we need to be more transparent in everything that we do, in every part of our business.

That negative trust issue could have an impact on beef in general, because there could be a tendency for consumers to see McDonald’s as the ‘canary in the coalmine’ – perhaps symptomatic of broader problems further along the chain.

“We see sustainability in beef as a larger, all-encompassing concept – operating in a way that ensures our industry is viable and economically strong for generations to come; that the industry is good for the world, good for families, and good for the people who buy our products. If people know more about where beef comes from and how it is produced, they will buy more,” Mr Brazier said.

He used this advertisement as an example to illustrate that point:

Interpreting ‘Sustainability’ in different parts of the world

One of the challenges in defining sustainability in beef was the contrasts in the way the industry operated in different parts of the world, Mr Brazier said.

That framework needed to cover people (the most important part of the business), community, cultural heritage, employment, animal health and welfare, food safety and quality, natural resources and efficiency and innovation.

“We all share a mutual objective of selling more beef, and creating more demand. Where we can collaborate, as an industry, is in talking about a common framework that we can believe in. It’s where we are going to get stronger.”

The same conversations were happening in other parts of the world. In Ireland, for example, the beef industry was strongly motivated to get its sustainability message out. It had helped Ireland open up access to the US recently, and to other markets in southeast Asia.

“They feel they have a great story to tell about Irish beef. Is it any better than an Australian beef story? No, but it’s an Irish beef story, and that’s what they are telling the world,” Mr Brazier said.

He said the McDonald’s focus on sustainability went far beyond just beef, as a commodity.

“It covers all food ingredients and beverages we sell. Already 100pc of the fish sold in McDonald’s comes from sustainable fisheries. A sustainable chicken strategy is planned for launch in 2016. In Australia, all coffee sold is already 100pc Rainforest Alliance aligned.

“For us going forward, sustainable sourcing has to be at the heart of the McDonald’s story.”

Mr Brazier said McDonald’s had possibly waited too long to have a global perspective and framework to be able to communicate the value system of the beef industry.

“If we don’t do it ourselves, sooner or later it is going to get more and more corporate buy-in. It won’t just be McDonald’s, it will be Walmart, Burger King and a host of other large companies that are all asking for different things – as opposed to your own industry driving forward and  telling your own story.”

Move away from Global Roundtable approach?

Beef Central asked Mr Brazier whether there was any suggestion that McDonald’s planned to move away from the Global Roundtable for Sustainable Beef concept, moving to a country-level approach to sustainability, based on local circumstances.

“The ultimate objective is in being able to help facilitate and demonstrate real improvement on the ground – however that looks,” he said.

“The GRSB has certainly provided a framework that can allow people who are aligned, or not aligned with it, to have a look at some of the things that are important, from an all of supply chain perspective.”

Asked whether specific McDonald’s animal welfare audits that currently apply at processing plant level might one day be extended back up the chain to beef production, Mr Brazier said if such an audit was to emerge, it would not be a McDonald’s-specific program.

“There are already producer programs in place that have an animal health and welfare component in them – it’s not like there are any industry secrets around this. The test for the typical farmer is whether there are any practises in use in the enterprise where, if a consumer was to walk onto the farm tomorrow, the producer would be nervous about being seen.”

“And certainly, over time, such boundaries change. Thirty years ago, many farmers might have been willing to simply throw an empty chemical drum down the gully. Today, that is much less likely to happen, as that sort of practice is no longer acceptable. It’s the same in animal welfare.”