Long road to recovery ahead for NT producers

CATTLE producers in Australia’s red centre are adept at running cattle in arid conditions, but even their resilience is being tested by this record drought. 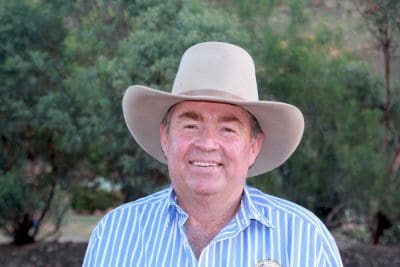 Alcoota Station, 180km north east of Alice Springs, has an annual rainfall average of 250mm, but has measured a trickle over 50mm in total for the past two years.

The year before yielded only 75mm of rain.

Alcoota’s herd has been gradually destocked and is now down to about 40 percent of its normal size, with remaining cattle back to to a core breeding nucleus and a few bulls.

The toll drought takes lies not just in the production lost through the dry years, but in the time it takes after the drought breaks for a herd to return to productive levels.

Alcoota’s Chris Nott explained to Beef Central at the LIVEXchange conference in Townsville that if drought breaking rain were to fall now, the property would still not generate any substantial revenue again until 2023 at the earliest.

“If it rains tomorrow, those calves that are dropping now, to get them to heavier weights, bullock weights, you are looking 30-36 months,” he explained.

“We have taken 60 percent out of the herd.

“When I say no turn off, next year there will be some dry cows, but dry cattle sales, they’re all gone.”

Asked how the business can survive with no income for three years, Mr Nott simply grabbed the tip of his belt in a hard yanking motion.

“Tighten the belt,” he said.

“You don’t spend a damn thing, there is no infrastructure spending, there’s no new vehicles, there’s nothing.

“It impacts everyone else down the line.”

The rain band skirted close by, but didn’t deliver a drop on Alcoota.

“I could smell it,” Mr Nott recalls. “I could see it, I could feel the wind from it.

“We were mustering, we got started early because we could see it was going to rain, I thought  we have got to get these cattle out, we’re going to get flooded in here.

“But it just went east of us.”

Alcoota continued to offload cattle in April while the stations that did receive the rain further east have been able to add some weight to their cattle and are in the process of unloading now.

Mr Nott said the widespread nature of the drought across northern and eastern Australia has made it very difficult to find grass to move light cattle onto.

Alcoota runs as a breeding operation, with progeny grown out to heavy weights when seasons permit, and sold at feeder weights or lighter when they don’t.

“This is unprecedented, what we’re seeing now,” he said.

“Normally, we expect to get dry times, and you operate in that scenario, but when all of the backgrounding country is in a dry time too, it makes it really hard to unload them.”

The descent into severe drought conditions on Alcoota has coincided with Mr Nott taking on the presidency of the Northern Territory Cattlemens’ Association (NTCA), which he was elected to 18 months ago.

He said most stations in the Territory are in a similar boat seasonally, with the devastating drought on the Barkly particularly well-documented.

NT producers have only received drought support via an application for rent relief from the Northern Territory Government and a 25 percent rebate on water infrastructure development available from the Federal Government.

Drought doesn’t discriminate between corporate or family owned operations, so the NTCA believes the best way to build resilience into beef operations in the Territory, and for that matter across the country, is for a major expansion of the Farm Management Deposit scheme.

Current costs of drought include at least $150/head freight to get cattle to agistment and back again, hay at approximately $500/tonne delivered – and that was only used to get cattle ready for transport, agistment costs of at least $5/head/week, new water developments, added to the continued running costs of a station.

“When you consider how much state and federal governments have spent, making FMD more advantageous to more producers and lifting the threshold from $800,000 to $5million would build the resilience the industry needs to survive a dry time,” Mr Nott said.

“It can also be used in times of floods as happened in the Gulf, bushfires, or a situation such as when the live export ban was put in place, or heaven forbid a major disease outbreak.”

The NTCA has also today called for NT drought working group to be established as a matter of priority.

NTCA chief executive officer Ashley Manicaros said the matter had been raised with the Minister for Primary Industry and Resources Paul Kirby and given the current funding programs being made available by the Federal Government its establishment would be timely.

“To date there has been little drought relief for Northern Territory producers and having a working group will help refine priorities,” Mr Manicaros said.

We are currently working with the Northern Territory Government on a pastoral rent waiver process for those areas which have been affected by below average rainfall over the last few seasons,” he said.

“At a national level the NTCA has been presenting our priorities as a singular voice. We have kept the Northern Territory Government abreast of what we have been seeking.”

“Given the breadth of the packages being made available it would make sense to ensure the full weight of a government is behind an industry and the regional communities which rely on its existence when it comes to minimizing what are already substantial impacts.”

“The benefit of Santas is they’re good enough to go to Vietnam, their carcase is good, you can still grade one or two marble score with Santas, and they feed very well – with their conversion rate, they perform well in the feedlots,” he said.

“Given where we live in Central Australia you have got to have those options so whatever the industry dishes out to you then you can fit that market.”

Mr Nott said the strength of live export prices at over $3 a kilogram has been very positive for NT cattle producers, but the impact of the drought continues to be the major challenge.