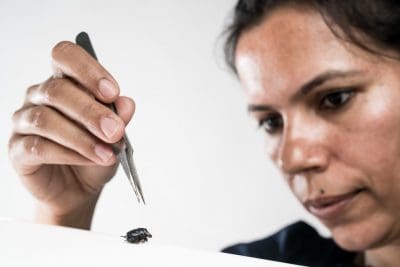 University of New England insect ecologist and PhD candidate, Amrit Pal Kaur, with one of her research dung beetles.

“We don’t have enough money to do everything – we need to be picking projects that we really want to have a material impact on, and then find a way to collaborate with the right partners to allow us to support them,” Mr Strong told last week’s online forum.

During questiontime, NSW DPI’s group director for livestock systems, Dougal Gordon asked whether the increased prices of sheep and cattle that had been seen had offset the decline in transaction numbers, and whether this would impair MLA’s ability to pursue the ‘Fewer, bigger, bolder’ R&D project strategy in the immediate future.

“There’s a number of components to that,” Mr Strong said. “The first is the amount of money available. The GBP (levy) projections are always a bit of a challenge, but I don’t think it is going to decline (through smaller kills) as much as projected, when you see the increase in prices, and increases in weights as well, as more cattle go through feedlots,” he said.

Separate to that, a lot of what the industry had to do better was around execution, and accountability within R&D projects.

“We (as an industry) have to be braver about the things that we decide to stop. For example we might have a $5 million project that’s due to run over two or three years, and we get 20pc of the way through it, and have spent a million dollars, and find out at that point that the starting premise turns out not to be right, and we’re not going to achieve what we thought we were going to at the start.

“If we pull up stumps at that stage, we’ve actually got $4 million in new cash and resources.

It might mean people have to change their focus, and some post-doctorate students might have to be re-deployed to something else, or livestock in a research herds that need to be redeployed. But from a leadership viewpoint, we need to be prepared to do that, and it’s one of the ways we will effectively leverage our money in a much better way.”

“Go back to the 12,500 projects (that MLA has supported over the past 20 years) – the industry is materially different from what it was 20 years ago. The best example we have of that is the two years of drought – arguably the worst two years, environmentally, known to many from an agricultural point of view.”

“It produced the largest turnoff of cattle and sheep in many, many years – yet all of our commodity prices were at, or above, five year averages, and many of them hit records. That was completely unprecedented – we’ve never seen that sort of thing happen before. In this type of seasonal environment, we normally see record low livestock prices, due to supply pressure.”

While few industry stakeholders recognised it, what emerged was a much stronger connection between the customer/end-user, and the drivers back at the production sector, Mr Strong said.

“A lot of that was just demonstrated through price, but we have a much more sophisticated supply chain than what we’ve had before – despite still being somewhat fragmented and disconnected.”

“Fundamentally, the structure of our industry is different from what it was, and there’s only about ten or less things that have driven that. It’s traceability and quality assurance, meat grading (producing product we can eat, whereas 20 years ago, meat quality was a lottery), market access (20 years ago Australia had a single trade agreement, with New Zealand); and a few others.”

“We’re in a fundamentally different position to where we were previously. We don’t have as many questions that the industry is trying to answer, so we should be getting more focussed on those things that are going to be material.

“And we have to be a lot more brutal about how we spend and allocate resources. If we are investing them in projects that are not going to deliver to our expectations – and that is not a judgement on the idea behind any particular project or idea – then we need to look harder what’s going to come out at the other end.

“The question to ask is: Is this project going to materially impact on the ability of producers or stakeholders to create and capture more value? If the answer to that becomes no, then we have to have a good reason to keep spending money or allocating resources on it. If we get to that point, then let’s point those funds at something else, which perhaps may hold promise to deliver even greater than what was originally anticipated, but which we might not currently be able to support because we don’t have funds available until next year, or the year after.”

A second webinar question from research leader Ian Johnson asked about what was planned in terms of shifting emphasis towards MLA leading greater adoption of R&D outcomes within the industry, given the ‘12,500 odd projects MLA had supported.’

“Given that investment in adoption has become very difficult for other agencies, what is MLA now planning?” Mr Johnson asked.

Mr Strong said as stated within its most recent five-year plan, MLA planned to double its investment in adoption.

“That does not mean we are planning on employing a swag of extension agents ourselves, but we absolutely want to support other groups, parties and operators to deliver that,” he said.

“The MLA team is really forming the execution plan for that work now. But we certainly do not have all the solutions, and are not going to be prescriptive about how we think it (extension) should be done. But we are going to double our investment in available funds for adoption, and make it a very clear component, in any project that it makes sense to do so, to have an adoption component as part of the investment.”

“That’s quite a shift, in a very short period of time, and we’re at that stage now, as to how we start executing that, and pushing it forward.”

The execution phase was not going to be easy, Mr Strong said, because it did not matter what statistics or anecdotes people used, the ‘visible’ adoption of what the industry had invested in was very low.

“There are examples of where broad-scale adoption of technologies has occurred, that people may not recognise as such – MSA is a good example. If MSA’s adoption is measured through stickers on packs of beef or lamb, then you get one number, but measure it through the percentage of red meat than can actually be ‘eaten’ these days, and you get a very different number. But the two things are a direct result of exactly the same work.”