A monthly column written for Beef Central by US meat and livestock market commentator, Steve Kay, publisher of US Cattle Buyers Weekly

DEDICATED beef lovers around the world know that faux meat isn’t the real thing, even if a faux burger bleeds blood (in reality, beetroot juice).

As I mentioned in last month’s column, these products are far from taking over the world and are likely to remain a niche product for the foreseeable future.

Consider these numbers. US sales of plant-based food products grew 11 percent between 2018 and 2019 to US$4.5 billion. Meat-alternative sales grow 9.2pc nationally in the 52 weeks ended August 24 to US$925 million, according to research firm Nielsen.

Traditional meat sales grew 1.9pc to about US$95 billion. But that meant faux meat sale were less than 1pc of real meat sales. Globally, the plant-based meat market was valued at about US$12b in 2018 and is expected to grow to around US$21b by 2025, according to market research firm Zion. I don’t know a global sales figure for real meat, but it is likely 50 to 100 times larger.

US campaign to prohibit the use of the word ‘meat’

The US beef industry is not sitting back and watching plant-based sales grow. In fact, it has been on the attack for months and its campaign to prohibit the use of the word “meat” is bearing fruit.

Faux meat makers face numerous efforts to stop them from using “meat” or “beef” to describe their products. The latest move came in the US Congress on November 4 when bipartisan legislation was proposed by House Representatives Anthony Brindisi (D-N.Y.) and Roger Marshall (R-Kan.). This followed lawmakers in at least two dozen states passing legislation that bar plant-based milks and meats from using the terms milk or meat to market their products.

The congressional bill would impact products sold in every state if passed and could act as a blueprint for other countries such as Australia to pass similar legislation.

The labeling issue revolves around a core question. Are consumers confused? A growing number of fake meat products are clearly trying to mislead consumers about what they are trying to get them to buy, says Jennifer Houston, president of the National Cattlemens Beef Association.

Consumers need to be protected from deceptive marketing practices and cattle producers need to be able to compete on a fair and level playing field, she says.

The naming debate has spilled into all three branches of government. Companies and interest groups have appealed to USDA and the Food and Drug Administration (FDA) to enforce or update vague rules around food labeling.

As noted, legislation has been filed in statehouses and in Congress, and lawsuits challenging those laws have been taken up by the court system.

And it is not just in the US. The European Union’s legislative agricultural committee on April 1 passed a measure that would prohibit the makers of vegetarian meat and dairy food alternatives from using marketing terms such as burger, steak and milk. There is a lot at stake.

The bipartisan The Real Meat Act in the US would codify the definition of beef for labeling purposes, establish a federal definition of beef that applies to food labels, preserve the congressional intent of the US Beef Promotion and Research Act, reinforce existing FDA misbranding provisions to eliminate consumer confusion, prevent further consumer confusion with alternative protein products and clarify the imitation nature of these alternative protein products.

The bill would also enhance the federal government’s ability to enforce the law. FDA would have to notify USDA if an imitation meat product is determined to be mis-branded. If FDA fails to undertake enforcement within 30 days of notifying USDA, the Secretary of Agriculture is granted authority to seek enforcement action. 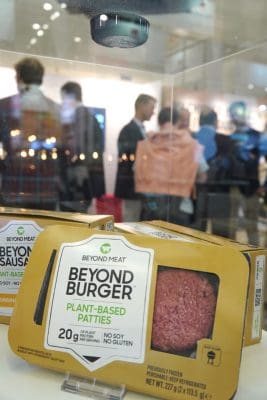 Ironically, the bill’s introduction came the same day that one faux meat maker, Beyond Meat, reported its first quarterly profit. At the same time, the parent company of Burger King says its plant-based Impossible Whopper is a huge hit with its customers and one of the most successful product launches in its history. Beyond Meat reported, net income of US$4.1 million or 6c per share for its third quarter ended September 28. Sales more than tripled to US$92 million.

The company now expects net revenues in the range of US$265-275 million for the year, representing year-over-year growth of more than 200pc. During the quarter, Beyond Meat expanded distribution to more than 58,000 retail and food service outlets globally and announced strategic partnerships with McDonald’s, KFC and Subway, it says.

With this kind of support, maybe it doesn’t care whether it is forced to stop using the word “meat” on any of its products.