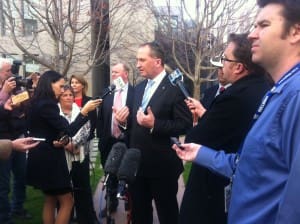 Minister Barnaby Joyce said the roundtable would help to improve understanding of the issues affecting the profitability of cattle producers in the north.

“We know that we are getting an upward pressure on cattle prices, however we must be mindful of the fact many people were left in an incredibly insidious financial position through the loss of the live cattle trade and we do should not forget about those that are doing it tough.”

“What I intend to do is that on the 23rd of September in Canberra is to have a round table so that we will give people the opportunity to come to Canberra.”

“I will put out an invite to senior members of the banks to see if we can get a fair understanding and fair game plan of how we deal with these issues that are in the north.”

Mr Hughes, from North Head near Georgetown, said the announcement provided a clear path forward to addressing the issue of rural debt and profitability.

“These meetings have accomplished what we set out to achieve when we flew down,” he said.

“The initiative shown by Barnaby Joyce has given a shot of confidence to the drought affected areas. We know the Minster understands the issues affecting the northern beef industry.

“There has been a lot of support from politicians in Canberra this week.

“Now we need to turn it into action.”