IN LINE with vigorous demand for animal protein worldwide as many economies continue to emerge from COVID, global animal protein giant JBS reported substantial growth in all key metrics for its first quarter ended March 31.

Underpinned by the stability of its beef and pork businesses in North America, strong performance by its Pilgrim’s Pride US chicken business and continued improvement in operations Australia, JBS reported double-digit revenue growth in all business units compared with last year.

Net revenue across the global operations reached R$91 billion (about A$25 billion in Aussie dollar terms), up 21pc on last year, while adjusted pre-tax earnings reached R$10.1b and net income R$5.1b, up 151pc on last year.

For the first time, JBS’s quarterly financials included separate results for operations in Australia. Previously Australian business has been ‘shandied’ into the JBS US Beef division’s financial performance, making it impossible to gauge the local performance. Often in the past, the state of operations (cattle supply etc) on one side of the Pacific was completely different than the other, making the reported results somewhat ambiguous.

Note that the Australian result below covers not only beef and lamb processing, but also the Primo Smallgoods business as well as the newer operations bought in the past 12 months including Huon Aquaculture and Rivalea Pork.

Why has JBS now chosen to report Australia separately? Neither the company nor its quarterly financial statement has provided any guidance, but speculation suggests one factor may simply be that the Australian combined animal protein business (beef, lamb, Primo smallgoods, pork, salmon) is now large enough to stand on its own feet, in a global financial reporting sense.

First quarter results for the period to the end of March show the Australian operations had net revenue (measured in Brazilian Real) of R$7418 million (the equivalent of about A$2.077 billion in Aussie dollars), up 20.2pc on the same quarter last year in Brazilian currency terms, but down 14.2pc on the previous quarter.

Adjusted pre-tax earnings for the March quarter in Australia reached R$445 million (about A$125m), up 398pc from the same quarter last year (equivalent of just A$25.1m), which did not include the Rivalea or Huon earnings.

The Australian results included the impact of a 4pc appreciation of the average exchange rate (BRL$ vs US$) in the period.

Meat sales in the Australian domestic market, which represented 43pc of JBS Australia’s total revenue in the period, were 14pc higher than in 2021, driven by the additions of Huon and Rivalea, which have a strong focus on the domestic market. 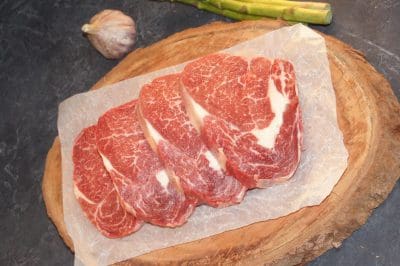 Recovery in demand in the retail and food service channels in the quarter to the end of March also contributed.

Net revenue for JBS Australia in the export market increased 36pc compared with 2021, explained by the demand that remains high in key markets including the US, South Korea and Japan, mainly in high quality branded products.

“Even with this supply scenario, Australian beef performance improved significantly compared to the first quarter last year, mainly due to the high demand for Certified Natural Grass Fed programs such as Great Southern and Pinnacle, and the different brands of grainfed cattle, which reached record prices for the period,” JBS said.