A YAWNING gap has emerged in tariff levels between Australian and US imported frozen beef in the Japanese market, but demand or price for Australian beef is yet to show any significant rise as a result.

It meant that US frozen beef imports have gone from a tariff level of 38.5pc to 50pc, for the remainder of the Japanese financial year ended March 30 next year. At the same time, Australia’s own frozen exports, advantaged by the Japan Australia Free Trade Agreement, continue to enter under a 27.2pc tariff.

It’s given Australia a massive 22.8pc tariff advantage over our biggest competitor in the Japanese market, for the next seven months.

“Tariff reductions for Australian beef, which are gradually declining from 38.5pc to 19.5pc by 2031, has certainly given Australia a competitive edge over some of our major competitors,” the embassy’s trade and economic section representative Jane Ogge-Cowan told the group.

“While Australia is subject to its own safeguard mechanism under the JAFTA, that is assessed annually rather than quarterly, year-on-year, and is much less likely to be triggered – despite the much larger volume of beef exports to Japan this year from both the US and Australia,” she said.

“At the moment, the Japanese meat trade is still taking a ‘wait and see’ approach”

Ms Ogge-Cowan highlighted a Japanese government initiative which she suggested Australia ‘needed to be aware of’, because of future potential investment implications. 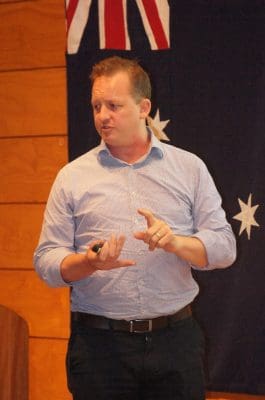 MLA Japan region manager Andrew Cox said there was certainly a significant tariff differential now in place between Australian and US frozen beef.

But he pointed out that the US ‘already’ faced a relatively high tariff (38.5pc) before the safeguard was triggered, compared with Australia.

“It’s important to understand that a lot of the Japanese buyers were forward-contracted to suppliers in the US, and also many of the larger players have significant stock levels on hand,” Mr Cox said.

At the moment, the Japanese meat trade was still taking a ‘wait and see’ approach, he said.

Another factor was Japan’s reliance on large quantities of just one cut – shortplate (shortrib) – out of the US, which at times makes up close to 50pc of all US frozen beef exports to Japan. Australia simply does not have the capacity to supply shortplate in the same volume.

That product is suited to some of Japan’s food service industry giants, including the Gyudon (beef bowl) chains, that have thousands of outlets across the country. Last time US beef disappeared off Japanese shelves in 2004, after the discovery of BSE in the US, beef bowl chains had to move to non-traditional meats like pork, because Australia simply could not meet the demand. Wagyu tour group gathering for the market briefing at the Australian embassy in Tokyo. Click on image for a larger view

Mr Cox said regardless of this, the big jump in tariff on US frozen beef would be a big impost on many Japanese import businesses.

“Initially, they may ask their (US) suppliers to wear some of that cost, or they might run their frozen stocks down,” he said.

“Without meaning to sound negative, they do have a number of other options, at this time. More pork items is another.”

“It’s certainly not as simple as just switching to Australian supply – particularly when the Aussie dollar is as high as it currently is against the US$ (today around US80c). But having said that, some customers who are able to switch, who can use Australian-type product, and starting to make inquiries, based on price.”

“But tariff is only one part of the overall price in Japan, and US beef remains pretty competitive with Australian, regardless.”

Another option being explored is evading the much higher latest tariff on US frozen imports, by importing US beef in chilled form, at lower tariff levels (still 38.5pc), and freezing it after it arrives. But if that becomes too popular, it in turn raises the prospect of triggering the chilled tariff safeguard on US beef this current quarter, further adding to the dilemma. 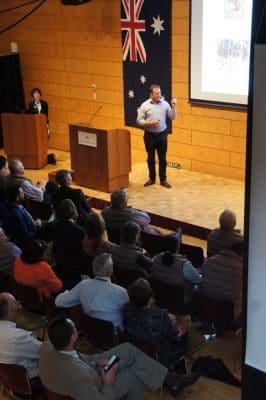 And for those importers now running down their stocks, trying to hold-out until April 1 next year when the new quota year starts, they run the risk of triggering the US safeguard on frozen a second time around.

Japan’s influential Asahi Shimbun newspaper (note staggering circulation: 6.7 million daily copies) recently reported that so far, movements in wholesale prices since the safeguard was triggered had been small, but yakiniku (grilled meat) restaurant operators and others in the food service industry had begun to prepare for price rises.

“Potentially they will be able to switch to chilled US beef, or beef from Australia, which is not affected by the safeguard,” Asahi Shimbun told its readers.

‘Wagyu’ name cannot be used on Australian product in Japan

“Every other market in the world has ‘Australian Wagyu beef’ on shelves and on menus, but in Japan, it must be called ‘marbled beef’, ‘premium Australian beef’ or some other term. To stay within the Japanese law, some food service customers use terms like ‘Just like Wagyu’,” he said.

“Obviously in Australia we consider Wagyu to be a breed, while in Japan, ‘Wagyu’ is as much about its origin – Japanese only.”

“It makes it very hard for us to get a grip on Australian Wagyu sales in Japan, and a little difficult to promote our Wagyu beef,” Mr Cox said.

“But the Australian product itself, because of its high marbling score, has no problem finding a home at the upper end of Japanese food service and retail.” Contrasting with this, Japan’s own Wagyu beef production, which shows relentless year-on year declines, fell another 5pc last year despite government efforts to arrest the slide. Domestically produced Fullblood Wagyu calves now sell for 800,000 yen, the equivalent of around A$10,000 (see graph). That figure has more than doubled in five years, and input costs such as feed have also shown dramatic rises.

Independent Australian export trade analyst Simon Quilty thinks the benefits to Australia in Japan’s Safeguard tariff rise on US beef will be realised after September, as supplies tighten due to lower US production and increased demand comes from China, as Japan looks to Australia to meet its needs and take advantage of the 22.5pc tariff advantage over US beef.

He suggested this window of opportunity for Australia through tariff advantage in Japan was likely to be only short-lived, however, lasting only until late December, as Japan looks to the US to rebuild its stocks in the first quarter next year for post March 31 arrival of lower tariffs.

“The US, Japan and Korea’s markets are all inter-related due to the large US production that is occurring, and being supplied into each one respectively, which in turn impacts Australia’s beef exports to these same markets,” Mr Quilty said.

“The peak in US production is right now, and once that has passed, the ability for each of these markets to lift will improve significantly,” he said.

The key points driving his view are:

While the full benefits of Japan’s safeguard and increased tariffs on Australia’s export competitors in this market has yet to materialise for Australia, those benefits may not be far away, Mr Quilty said.

Korea and Japan in the last 6-12 months have received large volumes of US beef imports which have displaced Australian beef. In Korea, displacement has been happening for more than 12 months due to both lower US import duties and cheaper beef, while in Japan displacement has been more pronounced for the last six months due to cheaper US product – much of which has been going to the previously mentioned Yakiniku barbeque restaurants. The Aussie Wagyu tour group dined at a popular yakiniku restaurant in Kyoto last night.

“When looking at exports to Japan, the impact of displacement is not as obvious, because both countries have increased beef exports. But the US has increased its exports at a substantially higher pace, and taken market share from Australia,” Mr Quilty told Beef Central.

In 2016 Australia’s market share was at 54pc, but this year – even though volume has risen – has fallen to 50pc, while the US share has increased from 38pc to 42pc – due to displacement.

“When looking at again the January to June period of 2016 and 2017, Australia’s volume increased by 27,300t whereas the US jumped an additional 38,000t. It’s the speed of this increase by the US which has led to the triggering of Japans snap back tariff,” he said.

He believes the easing in US production in the next 3-5 months will slow down the pace of displacement that has been occurring in both Japan and the Korea, and potentially see greater demand for Australian beef as a result.

Mr Quilty suggested that almost half the 13pc fall in recent Australian beef price levels (to all export markets) can be attributed to the rising A$ in the last six weeks – which has seen a rally from US74.5c to almost US80c.

“The more expensive the beef item the greater the price fall due to currency movements. Equally, a rising A$ has meant a falling US$, which has seen US beef exports become more price competitive as a result.”

The current weakness in beef pricing was without doubt related to lower prices in key markets such as Japan, US, Korea and China, but it should be noted this is not uncommon for this time of year, Mr Quilty said.

Why have we not seen the benefits of Safeguard?

Mr Quilty thinks the reason for the lack of market improvement in Japan for Australia since Safeguard was triggered is a culmination of factors such as the current yearly high in US beef production, the price weakening of US BBQ items over the last 4-5 weeks since safeguard was activated, a weakening of the US$, and seasonal global pricing weakness.

Yet another factor was China’s partial ban on six Australian red meat processors, which has seen Japan capitalise on a short-term weaker global beef market.

“Japanese importers are the masters of buying and sensing a weakness in pricing and being able to take advantage of these weaker price levels, but this approach to buying is a double-edged sword and often leads to buying hand-to-mouth. When supply tightens, it can often see a sharp rebound in pricing – and with US production likely to tighten from September-December, I believe this rebound in pricing is not far away,” he said.

Mr Quilty said US price falls monitored in the past six weeks included:

“So even with an increase in tariffs of 11.5pc on US frozen to Japan since August, the impact of this on US exporters has been offset in part by a 4pc fall in the US$ and a fall in US domestic pricing on key export items such as briskets, striploins, ribeyes and short plates, in a price range of 7-15pc.

“So Japan, even at the higher tariff, is still is an attractive option for US exporters to sell to, particularly when US production is peaking.”

“But the situation on global demand and Japan’s buying needs I believe will be very different after September, when the global seasonal price low has passed, US production has tightened and hopefully other Australian market issues have been resolved.

“It is at this point in the market that demand for Australian beef will likely be much better.”