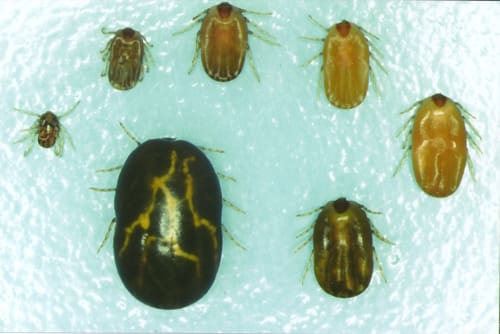 For the past 20 years, a debate about the presence in Australia of Lyme disease caused by ticks transmitting a specific group of bacteria has resulted in often intense and confused media attention. While some claim the organism (known as Borrelia burgdorferi sensu lato) exists in this country, to date there has been no conclusive scientific evidence to support this.

In Australia, only three infectious diseases are known to be transmitted from ticks to humans: Queensland tick typhus; Flinders Island Spotted Fever; and Q fever.

However, an increasing number of people bitten by Australian native ticks develop an illness with symptoms that are often similar to Lyme borreliosis, which is a serious disease in North America. These symptoms include feeling unwell, sore or stiff joints and chronic fatigue.

In November 2015, the Australian senate referred this matter for a parliamentary inquiry. The inquiry received over 1,260 submissions, making it one of the largest to date. The final report was released this week.

A total of 12 recommendations included research into prevalence and distribution of tick-borne illnesses and funding for this research, a national strategy for dealing with these illnesses, and guidelines for doctors.

The report recommended doctors focus on the symptoms and not the name. The report said, in fact, names should be removed from diagnostic discussions.

What’s in a name?

Classical Lyme disease outside Australia is associated with the acute phase of infection and is treated with antibiotics. Chronic Lyme disease is more controversial, even in endemic areas of Lyme disease, as symptoms are often not well defined, may persist in patients long after the acute phase and traditional tests (antibody or DNA) can no longer detect infection. Medical authorities disagree over whether Lyme disease can become chronic.

Some feel we should not use the term “Lyme disease” because the causative agent has yet to be found in Australian ticks, animals or humans. They also argue the term Lyme disease does not capture chronic symptoms and multiple other tick-borne infections.

Instead they advocate the term “multiple systemic infectious disease syndromes” (MSIDS). But researchers have yet to find an infectious cause related to patient symptoms.

To test or not to test for Lyme disease

If you have been bitten by a tick in a Lyme disease endemic area outside Australia, you should be tested.

Testing for classical Lyme disease focuses heavily on detecting an immune response (antibodies) specific to the Lyme bacteria. The committee acknowledged the only positive results using this test were in patients who acquired Lyme disease outside Australia. However, the inquiry report advised caution over the total exclusion of Borrelia burgdorferi in Australia.

Researchers are currently blind screening 650 bacteria specimens from UK, Germany, US, and Australia. Results are still pending, so the committee expects these results will provide conclusive evidence for or against locally acquired Lyme disease.

Are Australian ticks to blame?

The committee recognised most current evidence suggesting Australian ticks do not harbour or transmit the Lyme bacteria, but harbour a number of other microorganisms, including viruses and bacteria.

A new species of Borrelia, distinct from the Lyme disease borreliae and unique to echidna-biting ticks, has recently been discovered. The committee acknowledged this is significant, but caution that further research is needed.

One of the more serious aspects of this inquiry related to treatment and misdiagnosis. Given the lack of evidence for Lyme disease in Australian ticks and inconsistent test results, the report raised the potential for misdiagnosis and inappropriate treatment.

Based on the evidence provided, the committee was unable to determine an appropriate diagnosis or treatment of Lyme-like or tick-borne illness in Australia. However, it stressed it was inappropriate for medical professionals to brand patients as “crazy” and dismiss their symptoms.

The committee recommended the Australian government fund research into the appropriate treatment of tick-borne disease, assessed based on patient recovery and return to health. The committee also called for clinical trials of treatment guidelines and the acknowledgement of patient symptoms. It advocated for removal of the use of “chronic Lyme disease”, “Lyme-like illness” or “Lyme” from diagnostic discussions.

While these 12 recommendations provide a way for us to better understand locally acquired tick-borne infections, scientific research needs to identify tick-borne pathogens, diagnostic tests and effective treatment plans. However, more desperately, is the need for confirmed diagnosis and treatment for hundreds (thousands, even) of Australians fighting illness following a tick bite.

In the meantime, tick-bite prevention is the best advice.