A RADICAL re-think of industry representation structures was proposed by a meat processing stakeholder presenting an address at the ABARES Outlook conference in Canberra yesterday. 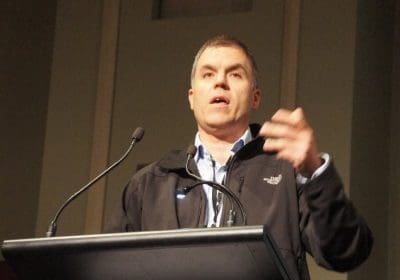 Teys Australia spokesman Tom Maguire called for a distinctly new model for industry representation, based on customer focus, and zoning-in on a few, big issues for impact.

Mr Maguire told the gathering the beef meat industry was currently faced with an unparalleled opportunity to grow, through rapidly expanding world meat demand. Beef demand was forecast to grow from 64 million tonnes in 2005 to 106 million tonnes by 2050, according to the UN’s Food & Agriculture Organisation.

“There is absolutely a role for industry associations in the interactive role with government to address these and a host of other challenges,” he said.

It was better to be inside than outside the tent, when dealing with issues like government-induced costs and charges in areas like labour and ulitilities, and market access. But these same issues had been identified at the ABARES meeting almost 20 years ago, in 2000. Little had changed.

At the same time, other interest groups like Greenpeace, WWF and Animals Australia had developed well-oiled machines in their relationships with government.

“The transformation of these businesses from commodity players to consumer-focused business is not yet complete, but is now well advanced,” he said.

“The question is, are the current industry associations and organisations keeping up with that trend?”

Sectoral representative organisations like Cattle Council of Australia and the Australian Meat Industry Council, and voluntary membership groups like the Australian Beef Association did not represent the majority of their industry members, diluting any impact in Canberra, he said.

AMIC, representing meat processors, accounted for only about 50pc of red meat processing in Australia.

Legal status giving representational rights in lieu of members could not fix this, Mr Maguire said.

“The question is, are these industry associations keeping up with the dramatic changes in the way the red meat industry functions?” he asked.

“What’s quite destructive is that when these groups want to have a fight, it might make good content for farm media, but in terms of the typical producer, it creates distrust in the supply chain.

“And trust is now the bedrock on which these modern businesses are built.

Mr Maguire said he was worried about the ability of industry stakeholders to keep up, now that technology in the red meat industry was taking off. He questioned how effectively the present industry organisations could help bridge what he called the ‘adaptability gap.’

“Lack of representation leads to a disconnect, and lack of engagement in the bush,” he said.

“The ‘us and them’ mentaility in the supply chain undermines trust, and is a ‘free kick’ to vertically-integrated competitors like chicken,” he said.

“Under these circumstances, organisations that are intended to facilitate innovation can in fact act as a handbrake.”

His answer was to move industry representation to a distinctly new, customer-focussed model.

“It’s about the supply chain – a place where producers, processors and lotfeeders all get together in the one room. Under the current industry representative model, it’s a bureaucratic nightmare to try to get anything done across the industry.

“It needs to be commercially-led. These sort of decisions about broader industry matters should be relatively straightforward. DEXA expenditure is a good example.”

Asked whether the Red Meat Advisory Council already filled the function he described, Mr Maguire said all RMAC did was debate those institutional matters within industry.

“Putting a peak body over the top of the mess does not fix the mess,” he said.

What was needed was strategic engagement, for political influence – a small, but ‘scaleable’ body responsive to members.

“It needs to focus on a few, big issues for maximum impact,” Mr Maguire said.

Industry organisations should be reliant on membership fees for their future – and should not be propped up by funds from government, he said.

An industry structure like that he proposed would also be much better positioned to compete with, and respond to critics and challenges, wither it be ‘animal activists’ or ‘fake meat’, he said.

Mr Maguire said what was often lost when driving around the streets of Brisbane or Sydney was just how important the red meat industry was to the Australian economy. This was important when seeking ‘due recognition’ in Canberra, he said.

“There’s 135,000 Australians employed in the red meat industry, including flow-on effects,” he told the Canberra-oriented audience.

“Export meat revenue is almost $11 billion a year, and live export, $1.6 billion. The industry value- add, per full time equivalent employee, is $170,000. Got to Wagga, or Naracoorte, or Rockhampton and it quickly becomes clear how important the red meat industry is to Australia, outside the capital cities.”

“The industry is so important in maintaining a vibrant rural and regional community in Australia.”