In a sweeping call-to-action address – heavily punctuated by a series of searching rhetorical questions – ACC’s David Foote this morning challenged an Ekka breakfast audience over current industry fragmentation and disunity…. 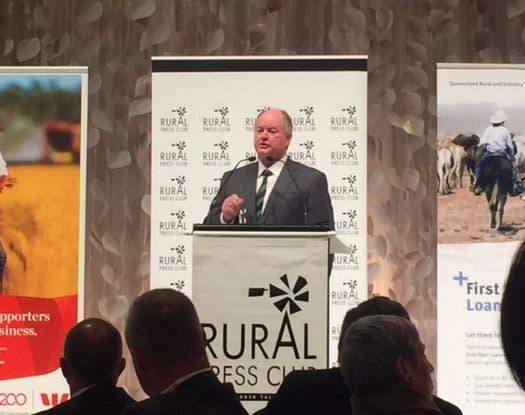 PROMINENT Queensland beef supply chain manager David Foote has used the example of the development of trisulfan pain relief for dehorning cattle as an example of the sort of vision and leadership that he sees as currently lacking in the Australian beef industry.

“Our beef industry had had some great visionaries,” he said. The trisulfan dehorning pain relief project pioneered by the late Zanda McDonald was an example.

“But following recent publicity about trials being undertaken by Alistair McDonald at Cloncurry, the first industry responses weren’t ‘Did it work?’ or ‘Is it good for the animal?’, it was ‘It will be too dear’.”

“How could you afford not to pay a dollar per animal to cover-off all the public perception about what we do to animals (dehorning without pain relief) in the bush?” Mr Foote asked.

“One dollar. Less than one-third of the price of a cup of coffee. But as an industry, we want to argue over it and fight it,” he said.

“We need the visionaries like Zanda. We may have a few visionaries left, but we have a void in leadership. It seems to me if you look around, where are the industry leaders these days?”

In a sweeping call-to-action address, heavily punctuated by a series of searching rhetorical questions, Mr Foote challenged the audience over current industry fragmentation and disunity.

“Have we just all gone vanilla, wearing cardigans?”

“In the political realm, our leaders become gun-shy about driving change, because in the current climate, they have a ‘single-term’ mentality. They have become protective. Look at the last election: 25 percent turnover in sitting members,” he said.

“Even the fire-and-brimstone union leaders of 40 years ago, and the Canberra lobbyists – where are they now? Have they gone to sleep as well? Who can name even five prominent leaders sitting in Canberra today that you know are go-to people?

“Have we just all gone vanilla, wearing cardigans?” he asked.

“Has social media taken away the need, or our ability to have focal points and focussed leaders for our causes? Are the issues just too scattered now; are we being bombarded by social media?”

Mr Foote suggested that arguably, people like former rugby league football great Shane Webke – a tireless campaigner for workplace health and safety in agriculture, following the loss of his father in a farm accident as a child – was now among the most noticeable and recognisable leaders, looking across Queensland’s primary industry sector and government.

He stressed that his comments were not meant to disparage current industry sectoral leaders, who worked hard on industry’s behalf.

“All I want to do is create a platform, an opportunity, and cultivate the desire to explore how to do it better, and how to bring the next generation along to give them the courage to do it better,” he said.

Too many ‘peaks’ illustrates fragmentation problem

Mr Foote used a ‘Dr Google’ example to illustrate the degree of fragmentation and confusion currently evident in the industry.

The same could be said for ‘peak’ bodies in live export, lotfeeding, and broader agriculture.

“It’s starting to look like a mountain range,” Mr Foote said. “Everything is a peak. How does that stakeholder determine the path for him, the body that will truly represent his interests? It is confusing.”

“And if it’s confusing for him, how confusing is it for the people being presented-to by those ‘peak’ organisations. Are they truly representative of the masses? Is everybody the boss? We haven’t got it right yet. The lines of demarcation are not that clear.”

Mr Foote’s point was clearly illustrated on Tuesday, during hearings as part of the Senate Inquiry into red meat processing consolidation. After two years’ worth of hearings, senators on the committee asked to be reminded who the constituent members of the Red Meat Advisory Council were. Even the respondent, from the Australian Competition and Consumer Commission, struggled to provide the full complement.

“We have a great number of industry stakeholders out there who do not participate in industry organisations,” Mr Foote told this morning’s audience. “It may be that they simply don’t know what they do, or what they represent.”

“When those peak groups approach government to lobby over an industry issue, do they have the critical mass? Do they carry any weight with the person behind the mahogany desk?

“If they lack that critical mass, is it the organisation’s fault, or is it just symptomatic of industry apathy? Maybe things just aren’t bad enough that we want to contribute,” he said.

Mr Foote said he hoped, that at each board meeting, those ‘peak bodies’ reflected on the ‘game changers’ they had been able to extract for their member stakeholders – not what they ‘could’ do.

“Who do our law-makers want to seek advice and knowledge from, before they make a policy decision, or at worst, a new law?,” he asked.

“The MLA – probably the most kicked-to-death organisation in the beef sector – has 50,000 members, and it attracts more negative comment from its members than any other. Yet less than 5pc of those members exercise their full voting entitlement.

“That’s actually a rise from 2.86pc three years ago, but still only 5pc of industry stakeholders actually feel motivated enough to have a say on the biggest show in town, representing the marketing and R&D part of our business. So who are we to blame?”

Mr Foote said it was not just the production sector where lack of representation problems existed. In the processing sector, the two largest processors in Australia had chosen not to be members of the Australian Meat Industry Council.

“How do processors, as a sector, walk into parliament house, when the face on the other side of the mahogany desk knows that AMIC is not representing the views of the two biggest players,” he said.

There were exceptions, however. Lotfeeders (ALFA) and NTCA had extremely high representative models, with 70pc of ALFA’s members actively participating.

Mr Foote drew some comparisons between beef industry representation in Canberra and state capitals, and that from competing proteins.

“Chicken and pork are both making big inroads into beef consumption. If you are a pig farmer or a chicken producer, there is only one representative body for each, which encompasses the entire supply chain. “When they go to talk to the bloke behind the mahogany desk, he knows they represent the views of all.”

‘Group’, rather than ‘self’

“We have to start to recognise the importance and power of ‘group’, over ‘self’,” Mr Foote said.

“We still fight between grassfed and grainfed, as though they are two different animals. Every animal I know of in a feedlot comes from a grass system – but we want to be so protective that we possibly lose the broader vision of the industry we are in.”

He said some time back he had had a conversation with a former federal agriculture minister who told him that on a matter where he was seeking ‘red meat industry consensus’ on an issue, that normally gave the minister ‘nine months head-start’ before a decision could be reached – and possibly ‘a full term’ if it was a big one.

“That’s because we’re not a united voice. They use it to their advantage,” Mr Foote said.

“Disunity is death in politics, but in the beef industry, we are still facing it ourselves. A fragmented message fails, every time.”