INDUSTRY advocacy for live exports, calls for an independent arbiter in carcase grading disputes, and the direction of dung beetle research were some of the diverse topics on producers’ minds during questiontime at Wednesday’s MLA annual general meeting in Canberra.

Western Australian sheepmeat and beef producer Mike Norton said there had been a lot of public comment in his state over the past 12 months about whether the industry should ‘persevere’ with live export, or let it ‘slip over the cliff.’

“Western Australia has been exporting sheep live since the 1950s, starting off with the wether market to Singapore, before expanding into the Middle East,” Mr Norton said. 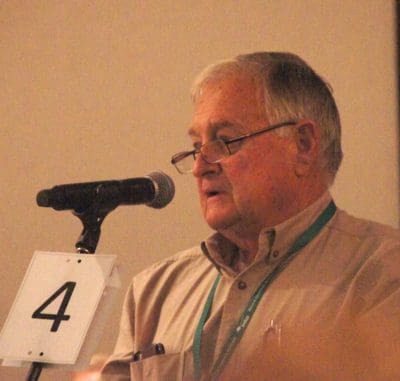 “It’s been the backbone of the WA sheepmeat industry for the whole of that period. The shippers will pay more than the processors, and we really do need that industry to keep processors honest.”

Mr Norton said the industry had been in positions similar to the one it was currently in with live shipping a number of times before.

During the Cormo Express episode in the early 2000s, Prime Minister John Howard wanted to shut the industry down, he said, “But we managed to convince him that it was in the best interest of everyone to keep it going. The deal we cut with him was ‘fix it up, but don’t give me any more shocks, because we have an election around the corner’.”

“In 2011 it wasn’t about shipping itself, but knocking boxes in Indonesia. Cattle Council inspected those boxes in 2008, and we believed they were not suitable. We did tell MLA that if somebody got in there with a camera, we’d be in trouble again – which is exactly what happened.”

“In 2006, we worked closely with government, putting regulations in place to make sure that what’s happened recently didn’t happen again. Obviously we failed, and as has been pointed out by MLA managing director Richard Norton, the failure was caused by a ‘few’ rather than ‘many’.”

Mike Norton said WA was an isolated state, and if sheep could not be processed there, they either had to be trucked to eastern states, or put on a ship to the Middle East or southeast Asia.

“We’re in a fairly limited position – quite different to the east coast.”

Mr Norton said some good ideas had been expressed at earlier MLA forum sessions about advocating for live exports.

“It’s all about communications, and social license. The industry has not managed the issue very well over the last six months. Collectively, we all have to go back and look at how the industry has communicated its message to the broader community, how we cut through, and deliver an outcome that’s not only good for live exports, but for the broader regional community,” he said.

“And it’s not only sheep: if they (animal activists) knock live sheep exports over, it will be cattle next, then feedlots, then dairy, then trucking livestock stock,” Mr Norton said.

“Collectively, we’ve all got to sit down and have a good think about how we manage and deal with this issue – there are a lot of levies coming out of the live export industry into MLA. I know you are in difficult position in dealing with government, but the other organisations can do the lifting, as we did in 2006-07 and 2011.”

In providing a response, MLA managing director Richard Norton (no relation to Mike Norton) referred back to comments he made during the recent Senate estimates hearings.

“On that day, eastern seaboard lamb spot price was 730c/kg, and forward contracts of 800c. At the same time, lamb prices in WA were 520c/kg, but prices moved as live exporters came into the market to over 600c/kg,” Richard Norton said.

“As I said to the senators, it is naive to think that processing all the lambs in WA won’t have a dramatic impact on livestock production and price in WA. It would fall dramatically. That means any claim that there will be more jobs provided by exporting chilled and frozen sheepmeat instead of live export will only last for a short period of time. It just won’t be viable to have a sheep industry in WA,” Richard Norton said.

The question then arose about what the industry did around the need for a communications structure with the people who actually vote, he said.

MLA’s job was not to go to see government to advocate to keep the live export trade going, Mr Norton said. That task was up to industry, through the Australian Livestock Exporters Council, as the peak industry council. MLA’s job was to give ALEC and other industry groups the data, evidence and support with strategies around what the impact might be to the WA economy and industry if the trade was closed.

Richard Norton said MLA had access to Consumer Insights data to see what consumers thought of Australian farmers and their practises, and live export.

“The results are pretty clear. There’s a couple of things that have come out – there’s been enormous support from metropolitan Australia to farmers themselves over the drought; and other issues like $1/litre milk.

“Metropolitan Australia basically trusts you as farmers. What they don’t trust are live exports and big banks. There’s so many areas where trust has been broken in communities, with big business etcetera.”

The challenge was how industry got through to the people who vote, and what it did next.

“The issue with marketing and advertising what we do as an industry to the broader community – and spending what has been suggested as up to $100 million in doing it – is that that would be a good investment if you can tell us that nothing will go wrong in our space in years to come. If it does go wrong, that means we have broken the consumers’ trust.”

Mr Norton said while he did not have all the answers, meetings had been convened by MLA involving state farming organisations and peak councils in December and February to “have this conversation.”

“It’s your industry – they are your representatives – they decide where the marketing dollars should be spent. If you as an industry do believe that there should be a huge campaign promoting Australian farmers to metropolitan Australia, then that’s what industry will do.”

“And as your service provider, MLA should do it, if that’s what’s decided. But just be aware that that will come with pros and cons as well.”

Mr Decman proposed the development of an independent adjudication system, along the lines of those that operated in the building industry and some others.

“An independent red meat adjudicator is needed, whose outcomes could be held to account, with no conflicts of interest, and made enforceable, through a binding outcome on both parties,” he suggested.

MLA took the suggestion on notice and committed to report back to Mr Decman, through the Integrity Systems Company.

Meanwhile AusMeat chief executive Ian King, who was in attendance at the AGM, confirmed to Beef Central that his organisation could be called on to act as an intermediary in disputes over grading outcomes if necessary, and occasionally did so. But AusMeat had no jurisdiction to ‘enforce’ outcomes one way or the other, he said.

However during the 2016 red meat senate Inquiry, Mr King gave evidence that the overwhelming majority of such disputes stemmed from producers not adequately understanding their AusMeat kill sheets, rather than any AusMeat/MSA grading accuracy issues.

In response to that, Beef Central in conjunction with Cattle Council and AusMeat, last year convened a webinar on understanding price grids and carcase feedback. Click here to view a recorded version of the webinar.

Several NSW levy payers, including Malcolm McClintock from Cootamundra and John Richards, raised concerns over dung beetle research, suggesting more emphasis should be placed on identifying new varieties of dung beetle (Indonesia had hundreds of species, for example, which they claimed moderated buffalo fly populations) for importation and release.

“We’re disappointed at the way the program has been organised, which does not concentrate on new species coming in,” he said.

Richard Norton acknowledged that there had been about a 20-year gap in any research or work done on dung beetles, before the current $23 million project was launched – entirely from MDC funds, with no levy funds involved. Beef Central covered the dung beetle research topic in this earlier article

Mr Norton said if there were any questions or debate about how those funds were spent, a dung beetle forum had been convened on 26 November in Wagga on the topic.

“Anyone who has a passionate interest in dung beetle research is welcome to attend and contribute,” he said.

WA beef producer David Stoate complemented MLA on the launch of the Good Meat industry education bus in August, but was disappointed it was not scheduled to come to WA.

“We’d love to have multiple buses, and take it around the world,” Richard Norton said, “but it’s a matter of funding.”

“We’ve gone out to seek corporate funding to support the program, and would love to take it to every school and show in Australia. The beef (virtual reality project) has been seen by 32,000 people since August, and its one pathway towards what metropolitan people in Australia think about farmers.”

“Again, if a state farming organisation or peak council think it is so great that we should stop doing something else, and put the Paddock to Plate bus on the road 24/7, then we will do it – but it’s just a matter of cost.”