Hyperloop: The future of inland transport? 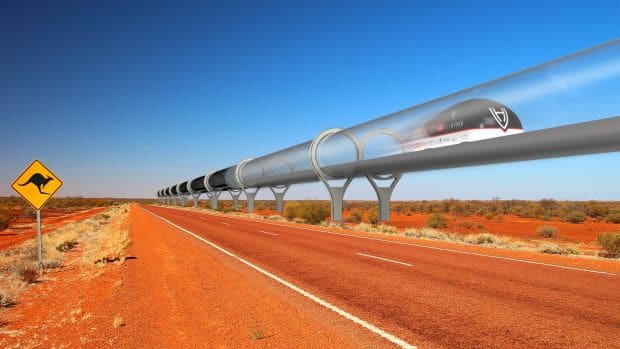 An artist’s impression of a ‘hyperloop’ transport system in regional Australia.

Is this a glimpse into the future of inland transport and freight in Australia?

It may seem far-fetched but the challenge of bringing this futuristic design into reality is already engaging many of the best and brightest young engineering minds around the world.

30 teams will test their designs in January on a new pilot-test track that is being constructed in California.

The “Hyperloop” has been conceived by rocket and spacecraft innovation company Space X, founded by Elon Musk, the billionaire behind payment company Paypal and car maker and energy storage developer Tesla..

The Hyperloop is a space-age transport system in which capsules carrying passengers and cargo travel inside a vacuum-sealed tube, either resting on a cushion of air or suspended by magnets, at speeds reaching 1200 kilometres per hour.

Equivalent to the speed of sound, that would connect Melbourne to Sydney in a touch less than 60 minutes.

Mr Musk first proposed the concept in 2013 and made his research public, or “open source”, so others could contribute to its development.

He has stated that he is not commercially pursuing the hyperloop, but SpaceX is sponsoring a contest to perfect the Hyperlook pod design.

30 finalists from 1700 entries around the world have been selected.

Each will have the chance to shoot their pod down the company’s one-mile test track.

Only one of the 30 finalists is from the southern hemisphere – a team from Melbourne’s RMIT university.

Named ‘VicHyper’, the team says it will be the first in the world to operate a Linear Induction Motor within a vacuum.

To reach these unprecedented speeds, a pod travels within an elevated tube network held at a near vacuum utilising magnetic levitation and Linear Induction Motors.

“Hyperloop is set to become fifth mode of transport, rivalling planes for speed and cars for safety.”

Steve Abson, CEO of the Infrastructure Association of Queensland, said it was only a matter of time before a major high-speed transport network connects Australia’s major eastern seaboard cities.

“Hyperloop could very well be this network.”

The Australian team has already been recognised for its technology, winning the Braking Subsystem Technical Excellence Award at the SpaceX semi-finals in Texas in January 2016.

The braking system primarily relies on magnetic forces to slow down, eliminating moving parts and friction.