STAFF and visitors on one of the Barkly Tableland’s iconic cattle stations paused for a few hours this afternoon to celebrate and reflect on a century of operations under the management of the Australian Agricultural Co.

AA Co’s subsidiary the Peel River Land & Cattle Co bought Avon Downs in 1921, but the 100-year milestone was delayed for a year, until today, because of COVID border closure restrictions.

AA Co itself celebrates its two-hundredth anniversary of its establishment in 1824 in two years’ time, marking it as one of the oldest corporate entities in Australia. 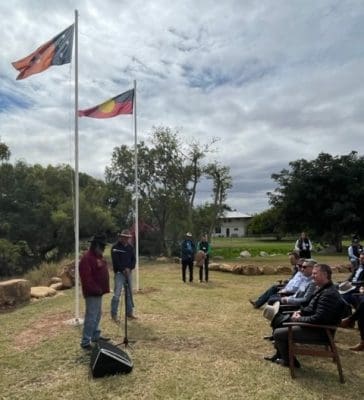 In fact Avon is not the company’s oldest pastoral asset. The 100-years of ownership milestone was celebrated at nearby Headingly Station, near Camooweal, four or five years ago.

Today’s celebration, hosted by Avon Downs managers Peter and Maree Balmain and their crew, was attended by NT agribusiness minister, Paul Kirby, representatives of the NT Cattlemens Association and a host of Avon Downs former managers and employees. AA Co board chairman Don McGauchie and director Jessica Rudd were also in attendance.

AA Co’s acting chief executive Dave Harris told the gathering that Avon Downs was an important part of company’s beef supply chain, and together with its other Barkly properties, sat near the heart of the company and its purpose to benefit future generations.

“Our people are our greatest asset, the land we manage and the cattle we run here are a result of the thought and care of previous employees that are all as passionate about this business as we are today,” Mr Harris said. 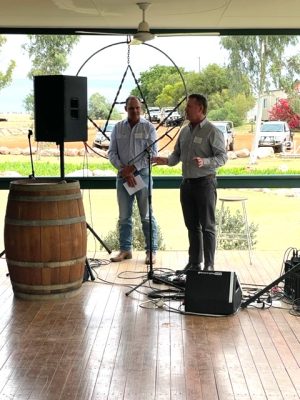 “Without our properties like Avon Downs, we can’t achieve what we do and it’s the quality of assets like this that have enabled the business to survive for 198 years and will for many generations to come.”

“Today is about celebrating this amazing milestone for the property, its operation by AA Co and for all the people that have called it home over the years.”

Covering just short of 4000sq km, Avon Downs is located on the eastern side of the NT, close to the Queensland border. It sits below Alexandra, with Rocklands and Austral Downs stations located to the east. The outpost of Camooweal lies about 70km to the east.

Today, the original herds of Shorthorns and later, Santa Gertrudis cattle have been replaced by F1 Wagyu breeding operations based on the Barkly composite, feeding into AA Co’s own branded beef programs.

Like many of the Barkly’s big runs, Avon has had a colourful history over the past century punctuated by droughts, floods, bushfires, conflicts with the original indigenous inhabitants, the tyranny of distance and challenges of many other kinds. The property’s cemetery carries dozens of graves dating back to the 1880s, many of people in their 20s and 30s, indicating just how tough life was in the region in its early days.

Some of the original stone buildings still remain, including this meat house dating from the 1920s. Set out below is a summary of Avon Downs’ early history, drawn from a comprehensive 1980s Government heritage report.

The Barkly Tableland, in which Avon Downs is situated, was discovered and named by William Landsborough in December 1861. Earlier that year several expeditions were formed to try to determine the fate of the missing explorers, Burke and Wills.

Five years later in 1866, John Ranken and his cousin, James Ranken, left North Queensland with a flock of 4000 sheep. After heading west they eventually came to the Barkly Tableland which contained major stretches of open rolling downs and red sandy loam covered with spinifex, Mitchell and Flinders grass, providing “extraordinary resistance to drought and prolonged grazing by domestic livestock.”

The Rankens were the first known settlers on land that later became known as Avon Downs.

Settlement of the Barkly had barely commenced when problems arose. The most obvious was distance and isolation. Wool destined for market had to be hauled by wagons to the nearest transport centre on Queensland’s eastern coast or shipped out of Burketown in the Gulf. It was not uncommon for pioneer graziers to have one wool clip ready for market long before the previous years’ had reached the southern wool stores.

The high freight costs for outgoing wool and incoming supplies and equipment greatly affected operating costs. These factors combined with Queensland’s first financial recession virtually stopped further expansive investment. However gold discoveries, both in Queensland and the Northern Territory during the 1870s, stimulated local demand, especially for the consumption of beef and mutton. The mineral strikes provided increased capital and consumers for the region’s pastoral industry.

The Northern Territory’s first gazetted station, Undoolya, was established and stocked between 1872 and 1874. By 1886 another thirty-nine stations including Avon were operating, carrying cattle, sheep and horses.

In 1882 the Herbert (Georgina) River blocks were released for sale and Thomas Guthrie of Melbourne acquired 3108sq km of land along the James River, naming his purchase Avon Downs. Soon sheep from his Victorian and South Australian stations arrived.

The conditions, including dog predation, proved challenging for sheep, however, and in 1919 Avon disposed of its sheep.

Cattle were introduced to Avon Downs in 1885, with a herd of 300 Shorthorns from South Australia. From this small beginning sprang the Avon Downs herd.

Thomas Guthrie had the first Avon Downs homestead erected around 1883. A second was built in 1903. This building was later demolished and a third, two-storey, steel-framed homestead was erected on the same site in 1961.

Australia’s great financial crash in 1893, followed by severe droughts from 1897 saw Avon Downs change ownership in 1906, when sold to Thomas Guthrie and Sons Pastoral Co Ltd. The annual rent paid to the government at the time for the six pastoral leases varied between £17.18s.9d to £37.10s.

According to accounts written by former Avon Downs manager Geoff Wagstaff, Avon Downs was sold again in 1910, this time to the Avon Downs Pastoral Co Pty Ltd. The company was a “syndicate formed predominantly of friends and of which his son, Senator James Francis Guthrie, was managing director and chairman. The deal was worth £80,000, including all stock.”

Since the 1919 sheep dispersal sale, Avon Downs has been exclusively used for beef production.

Although cattle numbers varied wildly over the past century due to drought impact, by the 1980s, the herd consisted of about 20,000 Santa Gertrudis, turning off 9000 head per annum.

The original Avon Downs fire-brand was BOO, although AA Co in 1920 changed this to TAG (after an NT law was passed requiring that all three letter territory brands include a ‘T’). It was also thought that the brand was chosen to honour original pioneer Thomas Guthrie.

Reflecting AA Co’s early impact from investment on improvements, the NT chief inspector of stock, Frank Bishop visited Avon Downs in 1922 and in his report dated 1923 he described the property as “Well subdivided; many paddocks were seen during my inspection. The windmills, earthen tanks and pumping engines were all in good state of repair. The homestead is compact, and the outbuildings and men’s quarters are in a very good state of repair. Avon Downs is a very fine property and well managed.”

Bishop estimated that the property was carrying 26,105 head of cattle at the time, and he thought it was understocked. A 1935 Government report said Avon Downs had 21 operational bores with water being delivered either by Comet or Southern Cross-Mills, four steam engines and a diesel engine. There were eighteen sets of yards.

A 1950 report indicated there were 18 white and 14 Aboriginal employees working at the station, which at the time had a herd of 30,000 cattle and 400 horses.

In a 1960 report to the NT’s Senior Pastoral Inspector, P. T. Robinson remarked that through a high standard of management, Avon Downs was close to its full development. All buildings, except for the homestead, were nearly new and accommodation for white workers was of a high standard. The station owned and operated its own road train and transported sale stock to either Mt Isa or the railhead at Dajarra.

During the war years, a supply road linking Mt Isa in Queensland to Tennant Creek was built. This newly sealed transport route acted as a conduit for large volumes of military personnel, equipment and supplies between the railheads at Mt Isa and Birdum in the Northern Territory.

As early as 1919, aircraft were landing at Avon Downs, although it is uncertain whether a dedicated area was set aside for use as an aerodrome. Captain Henry Wrigley and Sergeant Authur Murphy landed at Avon Downs in December 1919, after having departed Point Cook in Victoria. They were the first to succeed in a transcontinental flight of Australia and arrived in Darwin on December 1919, just two days after the arrival of Captain Ross Smith and Lieutenant Keith Smith.

In 1949 the station aerodrome was upgraded and lengthened to accept visits by AA Co’s own Miles Gemini (incorrectly spelt Jemini) aircraft – arguably the first pastoral company-owned plane in Australia, as well as the Flying Doctor’s aircraft.