WITH a significant percentage of the nation’s major feedlots and processing capacity within its borders, the Darling Downs is widely regarded as one of Australia’s premier beef producing regions.

Next week eight locally produced brands will vie for the title of the region’s Beef Brand of the Year in the third annual Darling Downs Beef Battle, a unique beef judging dinner organised and hosted by TSBE Food Leaders Australia (FLA).

The judges in the unique event are the hundreds of crowd members who each blind taste test a sirloin from every brand and individually rate them according to a range of criteria using a digital scoring system via their mobile phones. 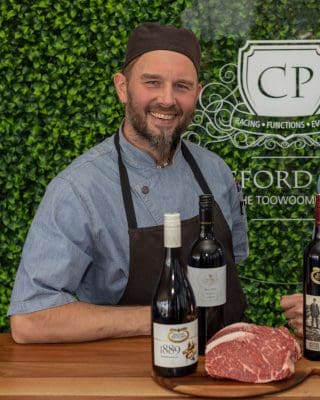 Internationally recognised chef, Olaf Pfeiffer, left, pictured will be preparing a steak feast for 250 guests in the Darling Downs Beef Battle next week at the Toowoomba Turf Club next Thursday.

TSBE Food Leaders Australia (FLA) General Manager Bruce McConnel said the competition, now in its third year, showcases the outstanding quality of beef produced on the Darling Downs and also helps to develop stronger relationships between suppliers and the food and hospitality industry.

The competition comes after TSBE and Nutrien Ag Solution took advantage of a newly constructed Agricultural Centre of Excellence at the TAFE college near the centre of Toowoomba last Friday to conduct an innovative Beef Cattle Husbandry Field Day.

The first-of-its-kind field day highlighted the best practices in general animal husbandry, including the methods of application, new treatments and pain relief.

The Darling Downs Beef Battle will be held at Clifford Park, Toowoomba Turf Club on Thursday, November 26, at Clifford Park in Toowoomba from 5.30-9.30pm. Tickets for the 250 person event are already sold out.