THE Australian cattle market price trend and national herd rebuild now hinges on a solid seasonal break, following a dry finish to winter and hot September across much of Australia. 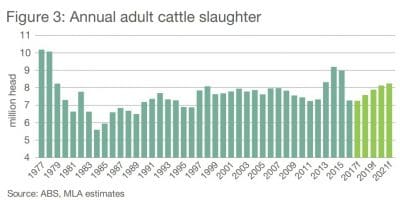 However, rain across southern Queensland and northern NSW in early October (and continuing this week) had revived the market, with reduced yardings and stronger restocker buyer activity lifting prices, Mr Tolmie said.

“If the positive rainfall outlook for eastern Australia in October comes to fruition, it will go a long way to supporting young cattle prices.” 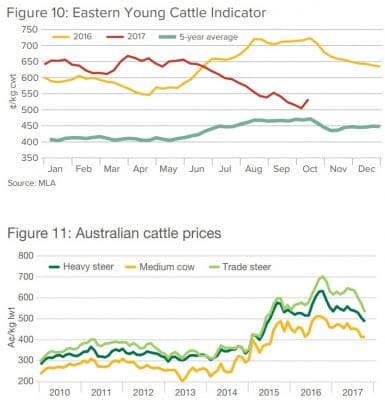 Feedlot demand has also supported the EYCI, driven in part by robust export demand for high quality grainfed product in Japan and Korea, especially over the past few months.

“With the herd rebuilding cycle still underway, the availability of lightweight stock through markets remains limited, which should see prices continue to track above the five-year average for the remainder of the year,” Mr Tolmie said.

The recent dry is yet to jeopardise the national herd rebuilding process, with adult cattle slaughter remaining on track with the July update, forecast of 7.25 million head, MLA’s projections update reported.

“Based on the more positive rainfall outlook for the rest of 2017, producers are not expected to further accelerate their current turnoff at this stage. However, further dry weather could derail the broad industry rebuild that is underway and challenge many producers with some tough decisions,” Mr Tolmie said

Record numbers of cattle on feed and a relatively low proportion of females making up cattle slaughter has resulted in an upwards revision to average carcase weights.

“Australian adult cattle carcase weights have held up well in 2017 – the national average hit a record monthly high in April of 299.2kg, and has averaged a record 296.5kg for the year to August – 10kg or 4pc higher than the corresponding period last year,” Mr Tolmie said.

As a result, the 2017 forecast for the national average adult cattle carcase weight has been revised higher than what was projected in the July update, to a record 297.4kg. This represents a 3pc, or 9.2kg, increase from the record reached in 2016.

Higher average carcase weights have prompted a slight increase in projected beef and veal production, from an estimated 2.17 million tonnes cwt in the July update, to 2.18mt – a 3pc year-on-year increase.

The rise in Australian beef production has seen exports also revised slightly up from 1.02mt shipped weight to 1.03mt for 2017.

Competitive pressure remains the constant on the export beef market, primarily underpinned by increased volumes of US beef. Furthermore, while a range of scandals in Brazil made headlines, the impact on trade was muted – namely trade quickly returned after a short-term ban on Brazilian beef into China, and the end of exports to the US market reflected very small volumes.

The US is Australia’s greatest competitor in Japan, Korea and the US itself – markets which combined account for two thirds of Australia’s exports – and it is pushing increasing volume through all three.

US beef production has recorded significant growth throughout 2017, underpinned by a stronger than expected recovery in the cow herd, more cattle being placed on feed and historically high fed cattle carcase weights.

After increasing 6pc in 2016, beef production is forecast by USDA to grow 5pc and 3pc in 2017 and 2018, respectively. This sharp turnaround in supply from the world’s biggest producer comes at a time when Australia is forecast to record only a modest increase over the next two years.

Australian exports over the last nine months have been the lowest in five years. Coupled with increased US exports, Australia’s market share in Japan and Korea is under pressure, declining from 55pc to 50pc and 52pc to 46pc, respectively (volume basis for the year-ending August).

While Australia remains the larger of the two suppliers in both markets, the lost share has shifted entirely to the US.