THE trend among emerging Asian markets like China towards seeking higher quality meat as their economies mature will serve to underpin premiums for Australian Angus cattle in the future, delegates attending the 2019 Angus Australia annual conference in Albury on Friday heard.

Robert Hermann, head of Ruralco’s markets intelligence service provider Mecardo, provided a summary of current price premiums for Angus cattle during the conference, and where they might go in future. 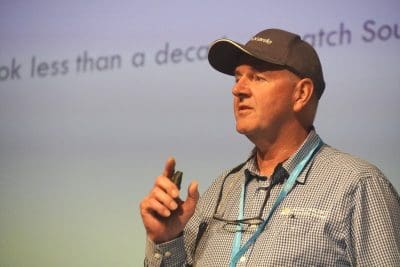 While there had been some fluctuation, he suggested Angus cattle premiums had averaged 25c/kg since mid-2015.

“We’re in a really fortunate position in the Australian beef industry. We have this massive, and growing population to our north, with half the world’s population in our vicinity,” he said.

“And as they get richer, the tendency is to eat more beef. In China, households earning $35,000 or more are expected to double over the next four years. History has shown that when countries transition from third-world to first-world economic status, they consume more protein, fats and carbs.”

“Now we have these big populations in Asia moving in that direction. That’s a real positive,” Mr Hermann said. “These export markets are absolutely the future of our industry in Australia.”

He said the big difference (in livestock value) between the current drought circumstances and the 1970s droughts was the current high beef demand from export markets which was supporting livestock pricing.

Using China as an example, Mr Hermann pointed out the growth that had been seen into China in the first quarter this year, relative to mature markets like Japan and Korea.

Especially evident has been the growth in chilled (proxy for quality) over frozen exports. Australian chilled beef exports to China for the year to April reached almost 6400 tonnes, up 160pc or almost 4000t on the same four months last year.

“That huge population in China is getting to know that Australia has quality meat,” Mr Hermann said.

“They are becoming aware that we have not only a base-level beef protein, but that we also have quality meat, and Angus fits into that category. It took China less than a decade to match South Korean import volumes out of Australia, and when coupled with the growth in population and annual income, we have someone on our doorstep, banging away, saying give us some product.”

Premiums ‘aren’t a given, forever’

In focusing on livestock premiums, Mr Hermann started his references by pointing to Wagyu.

“After talking with people, I came away from the Angus conference two years ago thinking there were a hell of a lot of Angus people out there who were going to mate females to Wagyu that year,” he said.

“The reason was that the premium for Wagyu at that point was extreme. In percentage terms, at times it was running at 100pc over and above the Eastern Young Cattle Indicator. But what happened was that (Wagyu feeder) supply increased, and average quality decreased, as more people got involved.”

“There was a flood of mediocre Wagyu feeders around, and at the same time, the industry was unable to grow the market quickly enough to take advantage of it,” he said.

The Wagyu premium had since declined substantially, albeit improving a little lately.

“So premiums, and the extra value you can get out of things, aren’t a ‘given’ forever – and Wagyu is an example of that,” Mr Hermann said. In seeking to measure Angus premiums, Mecardo uses AuctionsPlus trading as the best measurement of breed performance for price.

“It’s really the only sale channel where the breed is recorded accurately, against prices,” he said.

For 70 percent of the period since July 2015 (brown panel in the graph published here), the Angus premium had been between 12c/kg and 38c/kg liveweight.

“In percentage terms, the average Angus premium has averaged 8pc for those same cattle, and for most of the time has ranged between 5pc and 13pc,” he said.

“Whether you view this as a discount for other breeds or a premium for Angus, it’s nice to be where the breed currently sits.” 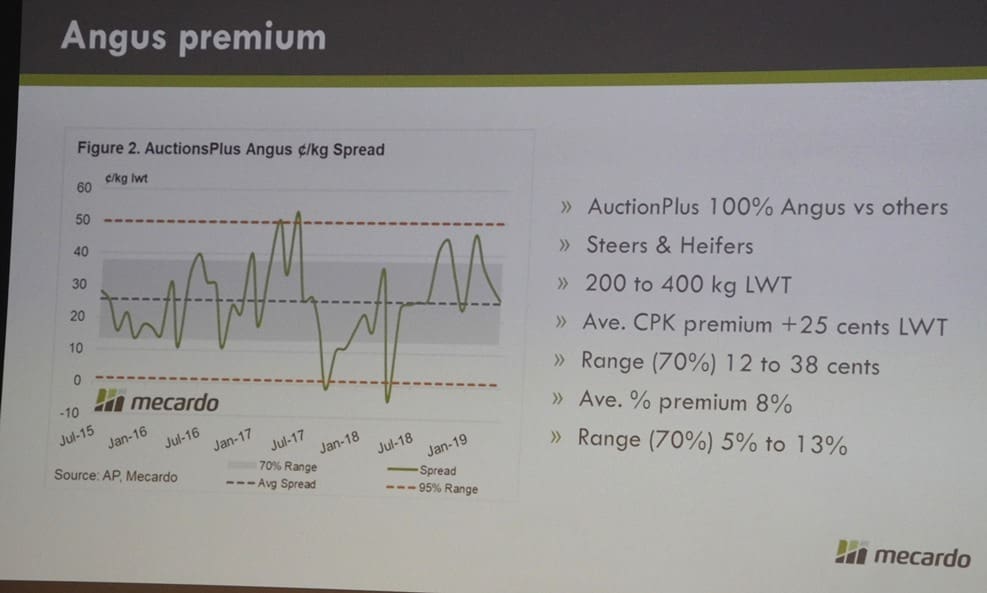 Mr Hermann raised a number of perceived ‘risks and opportunities’ in maintaining the Angus breed premium for livestock going forward.

One of these was the guarantee of provenance, including genetic assurances, where the animal came from and what its production history was. “It’s a risk if Angus breeders we don’t provide it, but its also an opportunity, if breeders can create that transfer of traceability to deliver that consumer comfort and confidence in the product.

“Another risk is quality assurance. One of the risks with an industry brand like ‘Angus’ is that everybody is in. But if you want to extract the true value over the longer term, you have to be able to describe what the benefit and value is. The opportunity is to define those parameters – how you can guarantee that every time somebody selects your product, they get the right outcome. If it’s a bad outcome, then the brand is damaged, and runs the risk of consumers not seeing the benefit. Delivering quality assurance, and defining those quality parameters is something that brands (like Angus) need to think about.”

Mr Hermann said the advancements in objective measurement for meat quality also represented a risk and opportunity for Angus, while ever it was ‘in front’ of other breeds in price premiums.

“If anybody else can say (using objective measurement) that their qualities are the same as yours, then they are going to catch up, premium-wise,” he said.

“The opportunity in that is for Angus to continue to refine and move the Angus brand and its premium forward. When you are at the front of the race, it’s much easier for others to catch you – but if you think that what you’ve done in the past is going to be enough to keep you at the front in the future, it’s a risk.”

During questiontime, a conference delegate asked whether the Angus brand was likely to become more ‘fractured’ over time.

“In the end, you will be as good as your lowest contributor. That tells me that if you want premiums to keep moving ahead – because the entire beef industry is trying to get where Angus is – then perhaps what you need to do is start identifying who the leader is. I suspect that is already happening with breeding, so why not with your marketing?”

“You need to be able to control the quality of a brand. Up to now, I suspect Angus’s competition (in the higher quality beef space) was not that great. But that won’t be the same forever, and so you will need to step-up, using some of these tools.”